As the number of people who've cut off ankle monitors is on pace to exceed last year, we've learned other defendants are letting their devices die. 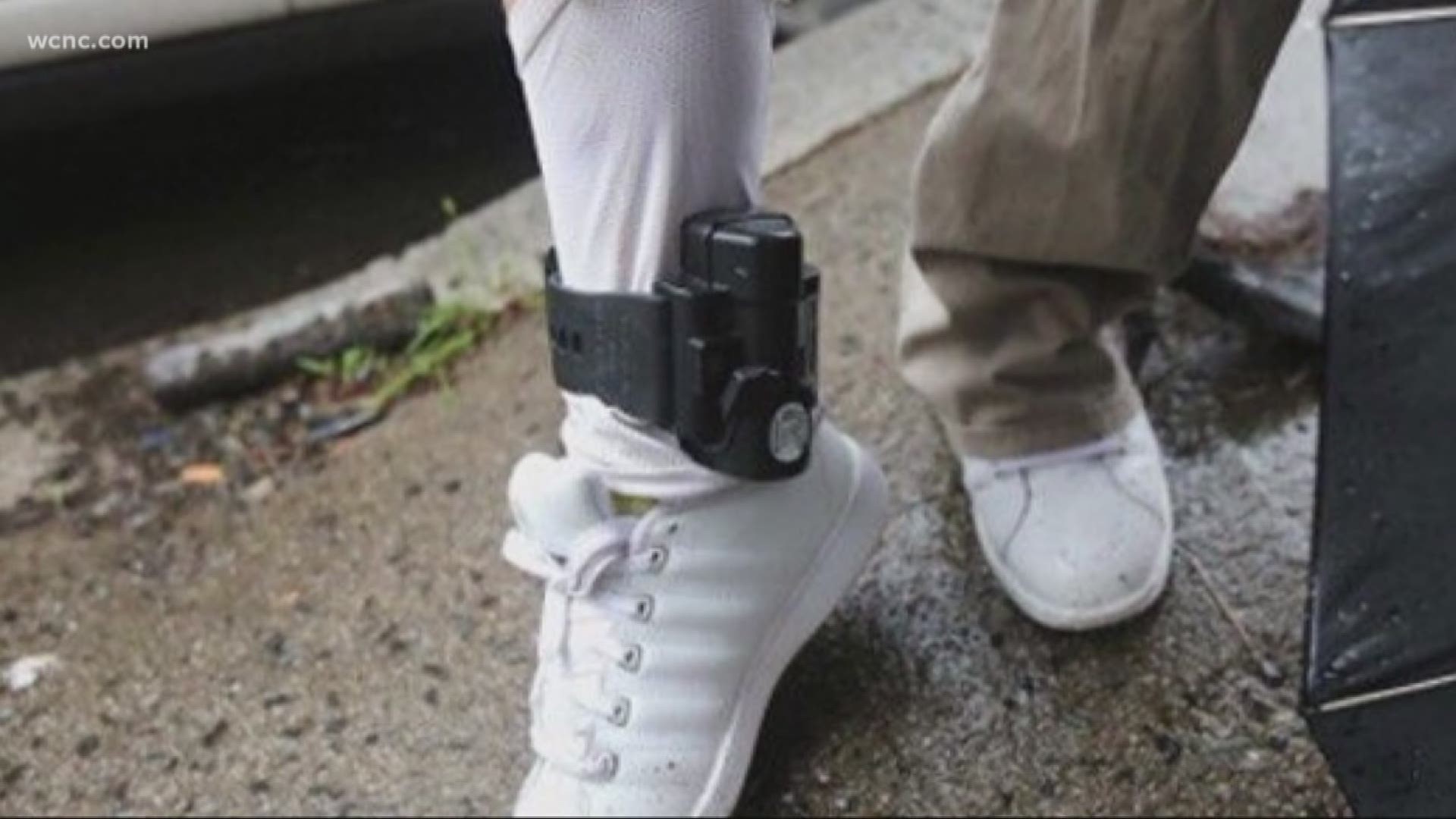 CHARLOTTE, N.C. — Not only are accused criminals cutting off their electronic monitoring devices, but some are also even letting their ankle monitor batteries die, according to Charlotte-Mecklenburg Police.

Police recently re-arrested Clifton Grier more than a week after they said he allowed his electronic monitor to die. Originally charged with robbery and theft, he now faces new charges, including resisting an officer, according to jail records.

A month prior to Grier, police charged a teen with raping and robbing a woman just days after they said he let his ankle monitor battery die.

The cases come at a time when there's growing criticism of the electronic monitoring program coupled with what Char-Meck Court Watch calls a more lenient new bail policy, which gives people charged with violent crimes a better chance at getting out of jail with electronic monitoring ahead of their trials.

"It's a big problem," Char-Meck Court Watch spokesperson Marcus Philemon said. "The taxpayers are paying the price for it. I think it's been watered down so much now that the criminals know the system now better than their attorneys do."

It's especially concerning to people like Lucille Puckett. We recently discovered one out of every four people wearing an ankle monitor is charged with a violent crime. Of the more than 400 defendants taking part in the program last month, on a given day, more than 20 of them faced murder charges, including the man accused of killing Puckett's son.

"The system is failing people," she said. "It's disheartening. It's nothing for them to either let their battery die as you see them doing or cut them off."

Who is allowed to wear ankle monitors already has the police chief and judges at odds over public safety. Judges maintain they use risk assessments and the facts of each case to determine who they release on electronic monitoring.

Once a defendant is released on electronic monitoring, a team of seven CMPD officers is tasked with keeping tabs on those defendants 24/7, but Maj. Nelson Bowling said the ankle monitors are only good when they're on.

"I think it's a great program," Maj. Bowling said. "I think it does very good if it's for the right people,"

He said defendants are required to charge the ankle monitor batteries for two hours every night. If they run low, he said CMPD makes an effort to get the person's attention, sometimes even visiting the defendant in-person.

"Most of the time we can simply resolve it with a phone call and say, 'Hey, your battery's going dead. You need to charge it,'" he said.

Unfortunately, not every defendant takes it seriously.

"Then we're on the lookout for them immediately," Maj. Bowling said.

Officers say dead batteries are not nearly as common as ankle monitor cuts, but they are part of the problem. So far this year, 80 defendants have cut their electronic monitoring devices, according to CMPD, which is slightly more than the number this time last year.

CMPD said 18 of those people are still at large.

"This device can only tell us where they were, not what they're going to do," he said.

Chief District Court Judge Regan Miller would not talk on-camera to address the criticism but shared an unpublished letter he sent to the Charlotte Observer:

The worst fear of every judicial official making decisions as to who should or should not be released from jail pending their trial is that a person will be released and commit another crime. Judges are committed to justice and public safety. However, there is no reliable way to predict future criminal behavior or a rise in criminal activity. No person or organization should be held to that standard.

A brief civics lesson; our founding fathers departed from the practices of England by creating a presumption of innocence.  Thus, both the Federal and North Carolina Constitutions include the basic principles of our criminal justice system that a person is innocent until proven guilty and prohibit the imposition of "excessive bail" on persons charged with committing a crime. With very few exceptions, every person charged with a crime, regardless of risk, is entitled to pretrial conditions of release including bail.  Recognizing that the imposition of any amount of bail as a precondition of being released from jail might prevent the person from being released, the legislature requires that judicial officials use secured bonds as a last resort. A secured bond means that the person has to deposit the cash amount of the bail with the clerk of court or have a bail bondsman promise to pay the bail if the defendant fails to attend a hearing. If a person charged with a crime has the means to post bail, they are entitled to release pending trial.

On January 23, 2019, an updated bail policy was issued for the state courts in Mecklenburg County. The policy became effective March 1, 2019.  The revised policy is the result of months of meetings by a local committee comprised of the Senior Resident Superior Court Judge, the Chief District Court Judge, a former prosecutor who is now a district court judge, the District Attorney, the Public Defender, the Chief Magistrate, representatives from the Mecklenburg County Criminal Justice Services Department and a national consultant from the MacArthur Foundation. The issuance of the revised policy coincides with a statewide examination of pretrial release policies by the State Attorney General. There is no evidence of any connection between pretrial release decisions and a rise in the incidents of violent crime.

Local statistics demonstrated that our local jail has been full of people who are just too poor to pay a bondsman to get out of jail despite the fact that they do not pose a risk to public safety or of failing to show up for trial. Additionally, there are some people who may be a risk to public safety who, despite the high amount of bail, have the financial ability to pay a bondsman and be released from jail pending trial without anyone monitoring their conduct.

Recent public comments by the Chief of Police of the Charlotte-Mecklenburg Police Department about judges relying on the CMPD electronic monitoring program as a crime prevention tool might cause one to conclude that this revision of the local bail policy is somehow connected to the recent violent crime, particularly the number of homicides. Nothing could be further from the truth. Such a conclusion ignores the fact that there has been a national increase in violent crimes in communities, including many here in North Carolina, that have not changed their bail policy and have no electronic monitoring program. Moreover, judges had been requiring the wearing of electronic monitoring devices by persons released from jail for at least the past ten years.

The revised local policy requires judicial officials to make decisions about who should be released from jail based on an individualized risk assessment. The risk of someone committing another offense is one of the factors considered. Gone is the bond schedule that provided ranges for financial bonds with respect to specific crimes. Judges are encouraged to review the circumstances of each individual defendant and to utilize the supervision offered by our county Pretrial Services Agency to monitor their conduct if they are released. The Pretrial Services Agency offers various levels of supervision including a high level for those who are considered high risk.  Requiring the individual to wear an electronic monitoring device may or may not be part of this supervision.

Families and communities in Charlotte are suffering the trauma of violence and deserve appropriate action. Pointing fingers and placing blame with one another will get us nowhere. We all have a role to play in creating safe communities: the police, the city, the courts, the county and most importantly, our citizens. Judicial officials, however, cannot pre-judge the guilt of any defendant or start punishing a person prior to trial. Judges are bound by their oaths of office to uphold the state and federal constitutions.