The doctor was investigated after a woman described how he touched her inappropriately during a visit several years ago. 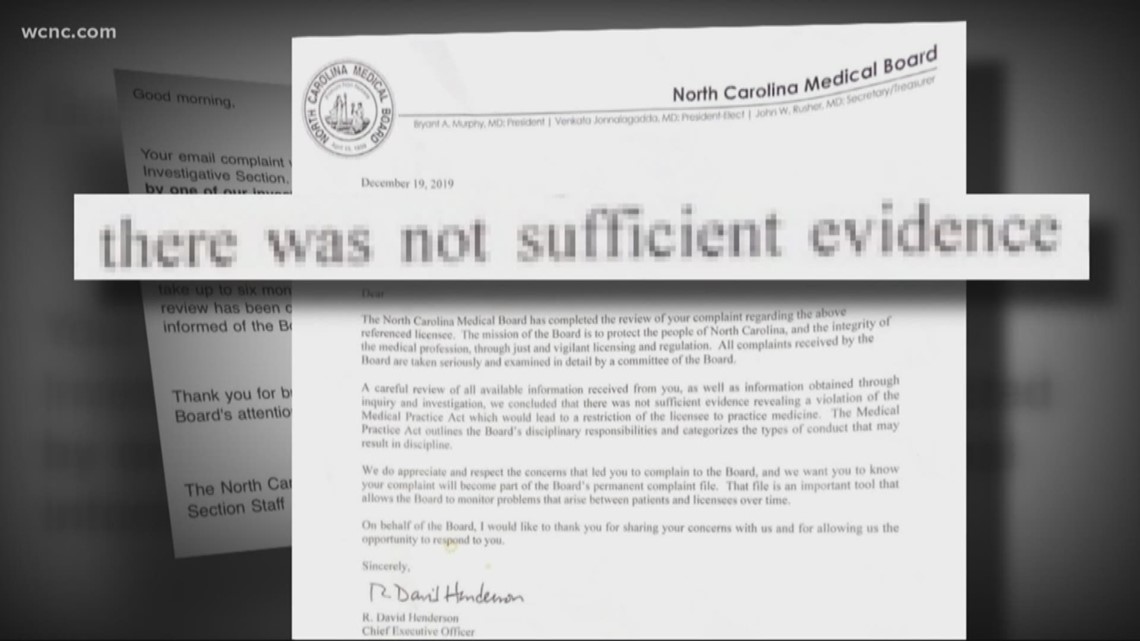 A woman described how her doctor allegedly touched her inappropriately during a visit several years ago. She said she filed a complaint with the North Carolina Medical Board because of a previous Defenders investigation.

In that story, NBC Charlotte reported on a former doctor with ties to Charlotte who had been convicted of sex crimes. Now, the woman’s accusation sparked a new investigation by the medical board into a different doctor.

In the initial Defenders investigation, NBC Charlotte showed people how they could file a complaint if they believed something inappropriate happened with a doctor.

The woman NBC Charlotte spoke to said she did just that, after years of struggling. NBC Charlotte did not show the woman’s face because of the sensitive nature of the allegations.

She said she had a rush of emotions while watching a promotional video for the initial NBC Charlotte Defenders investigation.

“My heart started pounding out of my chest,” she said. “I knew they were going to play it at 11 that night. I spent the whole day thinking on it, what would I do?”

However, she said the doctor in the initial story was not the same doctor she encountered six years ago.

“He touched something that was definitely not his,” she said.

The woman told NBC Charlotte it happened during a post-knee surgery evaluation.

“He had me lay back on the table and he’s trying to bend my leg different ways which they’d done before, but this time he took both of his hands and ran his hands up my pants leg to touch my crotch,” she said.

She says it was over within seconds, but the uncomfortable feelings lingered for years, as did her second-guessing herself.

“Shame and guilt and denial and fear,” she said. “Doctors are ones you’re supposed to be able to trust with your body.  It was a little bit violating, but it must have been part of the process so, at that time, I dismissed it.”

Then after the ‘Me Too’ movement, she says she spoke about it for the first time last year to her husband.

However, months passed and the woman said she still wasn’t ready to take action -- until she saw a promotional video for an NBC Charlotte Defenders story.

The story revealed that a former doctor who did his fellowship in Charlotte had been convicted of sex crimes in Missouri. At the time, Brian Blankenship with the North Carolina Medical Board urged victims to come forward.

RELATED: Doctor convicted of sex crimes with patients has ties to Charlotte

“You believe something inappropriate occurred and there was inappropriate touching, you can contact the North Carolina medical board,” Blankenship previously said.

“That’s when I followed up with the Defenders and contacted the medical board to file a report,” the woman said.

Her accusation sparked a state investigation.

However, ultimately the medical board sent her a letter saying they did not have enough evidence to take action, which confirmed her fear that her story alone would not lead to any consequences for the doctor.

NBC Charlotte is not naming him since no wrongdoing was found.  A search of the medical board’s website shows no prior action taken against him.

“I’m not surprised because what he did was subtle,” the woman said. “If anything seems questionable, tell someone.”

She said it took her years to come to terms with it, despite her professional experience.

“Being a counselor, trained in self-awareness, I’ve been shocked to realize that I think I was in denial of it,” she said.

However, she says the disturbing experience does not change her perception of doctors or of herself.

“My identity was not someone who was molested by a doctor," she said. "My identity is in Christ."

The North Carolina Medical Board says they determine whether to contact police about an investigation on a case by case basis.