Mother warns others after SUV rolls off with child inside, 'I just don't feel safe'

A Gastonia mother said her family's Chevy Suburban rolled backward down a hill with a 2-year-old inside, even though the car was off. 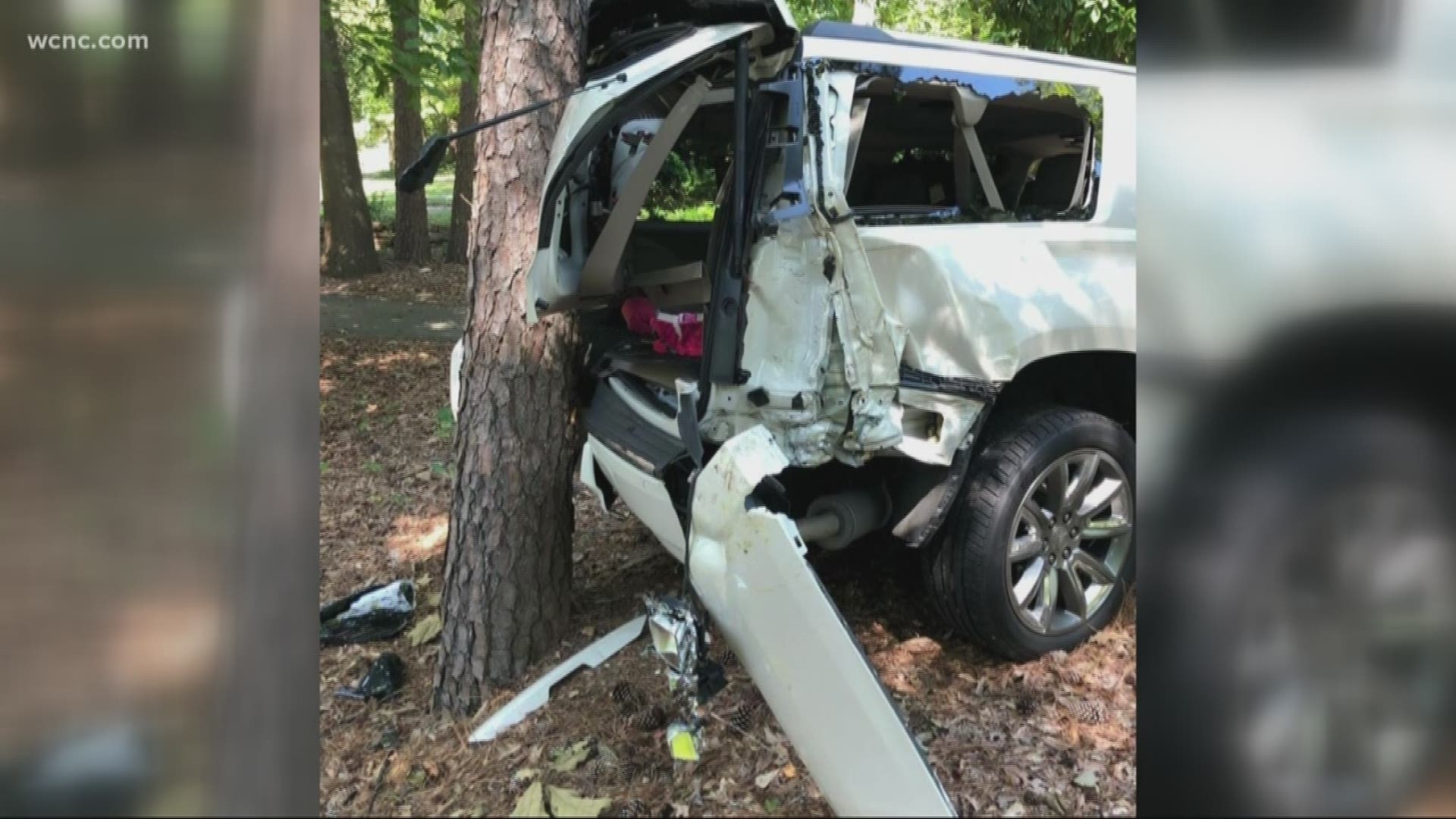 GASTONIA, N.C. — When you sit in the driver's seat of a car, you shouldn't be able to put your car in gear unless the key is in the ignition, the car is on and your foot is on the brake, but a Gastonia mother said her 2015 Chevrolet Suburban did just that, rolling down a hill with her 2-year-old daughter inside.

Lauren Pearl said the SUV was off and the keys were inside her house at the time.

"I don't know much about cars, but I know what happened to me shouldn't have happened," Pearl said.

Pearl said her daughter was in the driver's seat while she and her husband were loading up the SUV to go out of town.

"She gave me this terrible panicked look," Pearl said. "The further it rolled, the faster it went. Luckily, the car didn't flip."

Pearl said she didn't see her daughter switch gears, but heard it, then watched helplessly as the car rolled backward down an embankment into the neighbor's yard. She said a tree was the only thing that stopped it from going farther.

"My two-year-old shouldn't have been able to jerk the gear while the car was off," Pearl said.

Pearl said a video, filmed after the August 2018 crash, shows the extent of the problem.

For nearly a year, the mother said her insurance company has tried to get General Motors to take responsibility. The insurance company even commissioning a third-party investigation, which concluded, "The electronic shift lock release system contains a fault which enables the gear shift lever to be moved from the P (PARK) position without restriction."

Despite that finding, Pearl recently learned General Motors denied responsibility, so she decided to speak up.

"I just don't feel safe," Pearl said. "I want somebody to accept responsibility."

Federal complaints show Pearl is not the first person to experience a 2015 Chevy Suburban roll away when the car was off. Two others previously filed complaints with the National Highway Traffic Safety Administration.

One person said on September 15, 2014, "after shutting off and exiting the vehicle, it rolled away."

The other complaint said on September 9, 2014, "You can stop the vehicle while it is in gear, and if you get out the vehicle can just roll away. This has nearly caused two serious accidents, once it rolled backwards, narrowly missing a pedestrian, another time forwards into a car in front."

Pearl said she is thankful her situation didn't turn out worse than it could have.

"I know that if I was given a redo, I wouldn't have been blessed as much as I am. I have a 5-year-old and she could have been standing behind it," she said. "It scares me to the death that a car of that magnitude was able to malfunction. I would hate to see another family go through what I've had to go through and [have] it be more extravagant than mine knowing that I could've said something to prevent it."

A General Motors spokesperson said the company does not dispute the family's story and took the case seriously, but did not find a factory defect or need for a safety recall.

"After extensive investigation and disassembly of the automatic transmission control assembly and the electronic park lock with the participation of the automotive supplier, GM determined it is not responsible for the cost of any necessary repair," the company said in a statement.

Spokesperson Dan Flores added, since the SUV's limited factory warranty had already expired, the responsibility falls on the owner.

"The current customer purchased the vehicle out of warranty," Flores said. "A factory warranty protects a customer against factory defects for a limited period of time (i.e. not for the entire life of the vehicle). When part failures occur outside of a warranty, the customer is responsible for the cost of the necessary repairs. Part and/or component failures can be caused by a variety of reasons. I can't and don't want to speculate on what caused this issue."

Pearl said she bought the Suburban used, and owned it for less than two months.

She said she learned a valuable lesson from all of this: always use your parking brake and never let your child sit behind the wheel -- even when the car is off and the keys are inside your house.