WCNC Charlotte found dozens of licensed notaries were stripped of their commissions because of forgery, fraud, or previous criminal records. 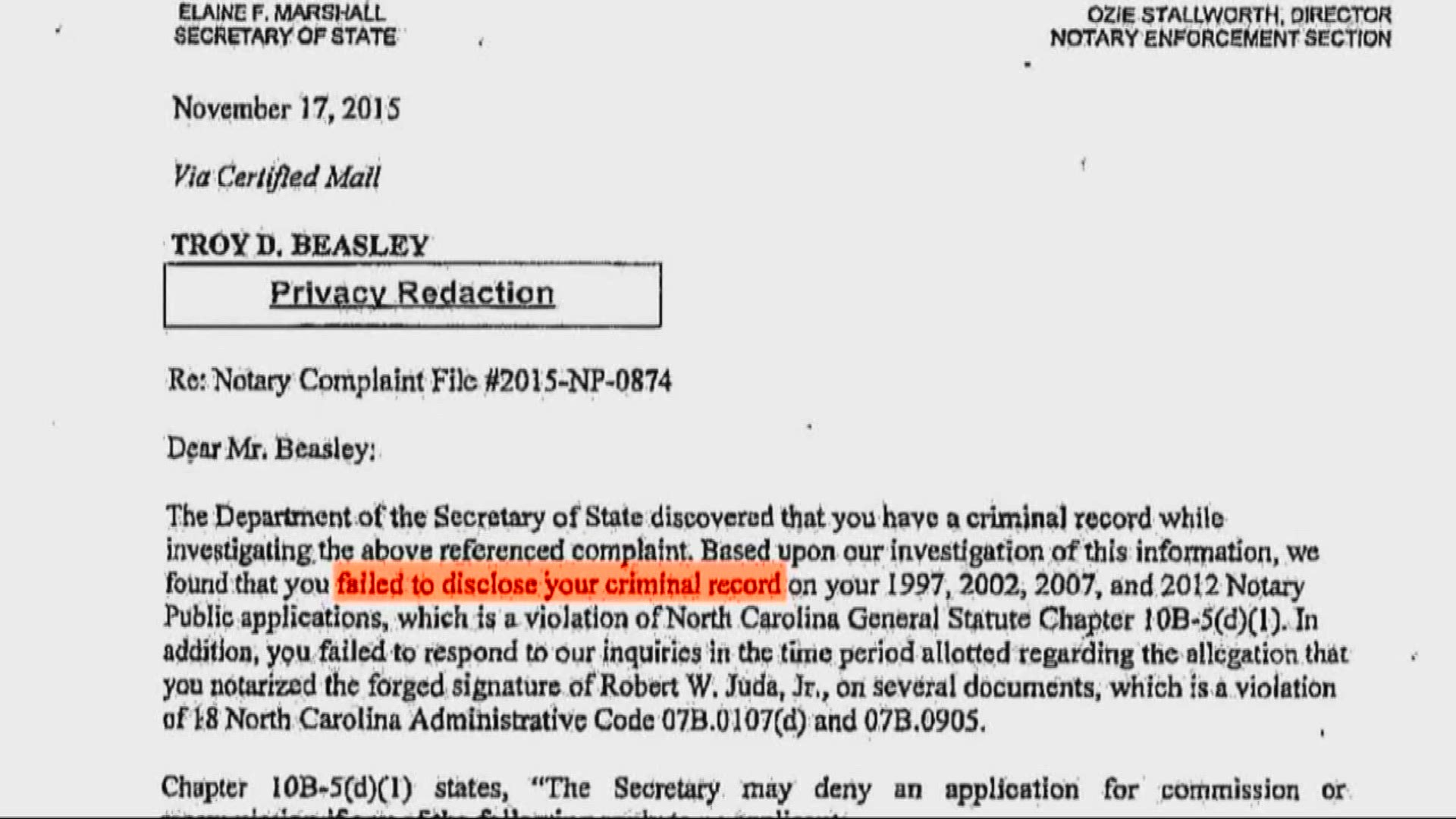 In November, WCNC Charlotte discovered scammers in Charlotte were forging people’s signatures to sell their homes without permission. Now, the Defenders team learned it doesn’t stop there.

WCNC Charlotte found dozens of licensed notaries, who are in charge of signing important documents, were stripped of their commissions because of forgery, fraud, or previous criminal records.

Those findings are leading State Senator Natasha Marcus to launch her own investigation.

The Defenders team learned several notaries had criminal records that the state didn’t know about when the notaries were licensed.

“Thank you for looking into it, because it’s not something I was aware of,” Senator Marcus said.

Public records show since 2015, at least 84 notaries have been stripped of their commissions; 22 notaries had their licenses revoked in connection with fraud, forgery, or embezzlement.

There were also ten notaries who had criminal records the state never knew about, according to state records.

“There are people who slipped through the cracks and should never have had a notary seal,” Senator Marcus said.

One termination letter shows a notary failed to disclose a criminal record, but the state allowed them to renew their position in 1997, 2002, 2007, and 2012.

WCNC Charlotte began investigating after a Charlotte home valued at more than $300,000 fraudulently sold for just $9,000. Police say the suspect forged the name of the homeowner, Rahim Rupani, on the deed.

Rupani, who lives in Atlanta, told WCNC Charlotte a neighbor first alerted him to unwanted visitors at his Charlotte home.

Then, he learned about the shocking transaction.

Police are also investigating a strikingly similar crime at another home in the same neighborhood. In both cases, the notary public stamp and the signature are the same.

The North Carolina Secretary of State’s Office would not comment on whether the notary is under investigation.

However, the Defenders team learned the notary officially resigned her position a month after the police reports were filed and she has since moved out of state.

“I think it would be scary,” said Michael Burt, a member of the Real Estate Lawyers Association of North Carolina.

Burt said it’s not clear who would legally have access to the home if two sides claim ownership until the court makes a final determination.

WCNC Charlotte found the register of deeds in other states takes proactive steps to prevent fraud. In the Nashville area, the Davidson County Register of Deeds allows homeowners and businesses to voluntarily sign up for an alert system, which sends them an email anytime a document is filed with their names.

A Mecklenburg County spokesperson said the Register of Deeds, Fredrick Smith, declined a request for an interview.

Senator Marcus has already proposed a new law that took effect in December.

It gives Register of Deeds Offices in North Carolina the authority to screen for fraud, instead of simply rubber-stamping documents.

“We fixed that,” Senator Marcus said.

Senator Marcus said she’s turning her attention to notary public laws because of what the Defenders team uncovered.

“I’d be happy to look into whether we need to change our laws,” Senator Marcus said.

In the meantime, Rupani says he’s been fighting a legal battle in court to officially reclaim ownership of his home.

WCNC Charlotte spoke by phone to the notary in Rupani’s case. She said someone forged her signature as well, and he said she was not sure how they got ahold of her stamp.