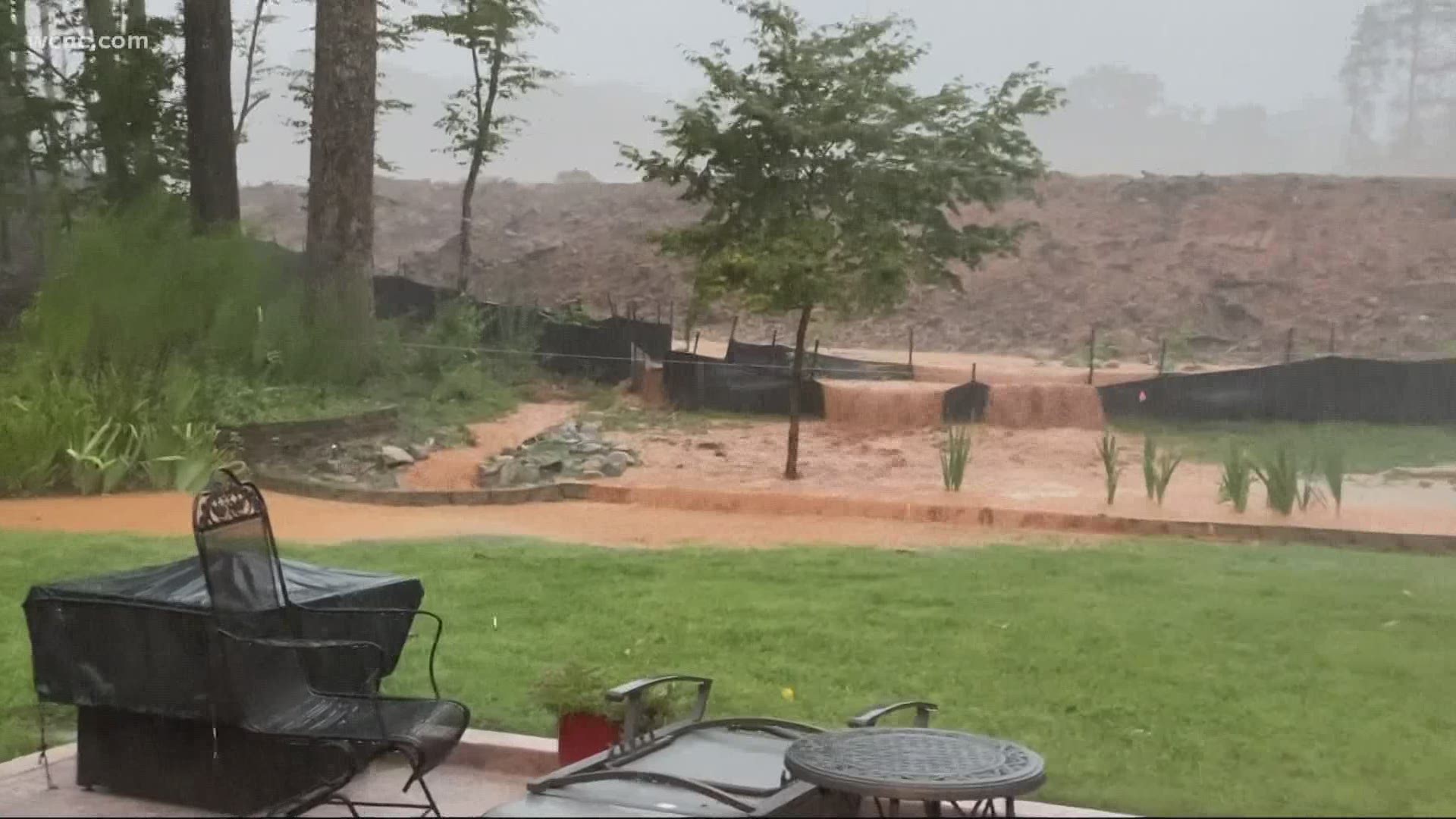 TEGA CAY, S.C. — A family in a Tega Cay neighborhood is dreading more rain because of a Lennar subdivision that is under construction behind them.

"It washed our mulch and puts a bunch of mud in our yard and flows down through our yard and the neighbor’s yard,” Johnson said.

Before construction began behind the Johnson’s home, water flowed naturally down into a catch basin at the rear of their property. Lennar tried to mitigate flooding onto the Johnson’s property by installing black fabric silt barriers which Lennar said are designed to let water flow through.

The barriers have been successful in catching much of the silt, but Johnson’s video shot during heavy rain shows a problem.

Mary Johnson isn’t the only neighbor affected by the new Lennar subdivision called Windhaven. John Kirby told WCNC that he has had flooding too from the same development.

Kirby said a mud berm has rerouted water his way and the rushing water has eroded his fence posts. Kirby said he has had to install his own rock barrier to slow the effects.

A spokesperson for the city of Tega Cay released the following statement:

“The City was forwarded complaints on Sunday that were originally sent to York County regarding this. On Monday morning, the City sent one of our stormwater inspectors to investigate the claims. The complaints were about alleged storm water violations from the Windhaven subdivision (in the City) affecting 1323 & 1327 Crown Ridge Dr. in Palmetto West (in the County). Our inspector performed a full site inspection of the current conditions of the BMPs (erosion control measures) during his visit. The complaint was in reference to pictures it sounds like you also received. Upon inspection, the inspector found no evidence of damage to adjacent properties and the BMPs were in good repair. The City also received a call from SCDHEC later in the day on Monday about the same issue. The City agreed to go back out and meet with both residents. There was approximately less than 1/16” of sediment in the yard. The area in question is actually being elevated from its original grade to reduce the amount of storm water that was flowing onto the adjacent properties prior to grading activities beginning. The developer is working to complete that part of the project as quickly as possible so the area can be stabilized with vegetation. Per our inspections, Lennar is in compliance with the Storm Water Prevention Pollution Plan (SWPPP) that was approved by the City’s engineers and SCDHEC. Our inspector has not been able to determine who placed the log/limb on the silt fence in the video which was allowing water to drain over top of the fence instead of filtering through the fence."

While Tega Cay city officials say Lennar is complying, it's visible in the Johnson’s video that compliance doesn’t mean problem-free.

WCNC sent the videos shot by Johnson to Lennar. Lennar responded with a statement saying:

“Lennar strives to be a good neighbor and promptly rectifies issues brought to our attention. Unfortunately, heavy rains during a stage of land development created concentrated runoff. As we revegetate the slope in the coming weeks in accordance with City of Tega Cay requirements, drainage should return to more natural conditions.”

The morning after WCNC sent Johnson’s videos to Lennar, Johnson saw bulldozers working in the same area of what appeared to be the breach that lets this water though.