New mother died in cell as jailers mocked her, now her family can't even see the child

Nimali Henry’s relatives have been almost completely cut off from her daughter, now seven years old. 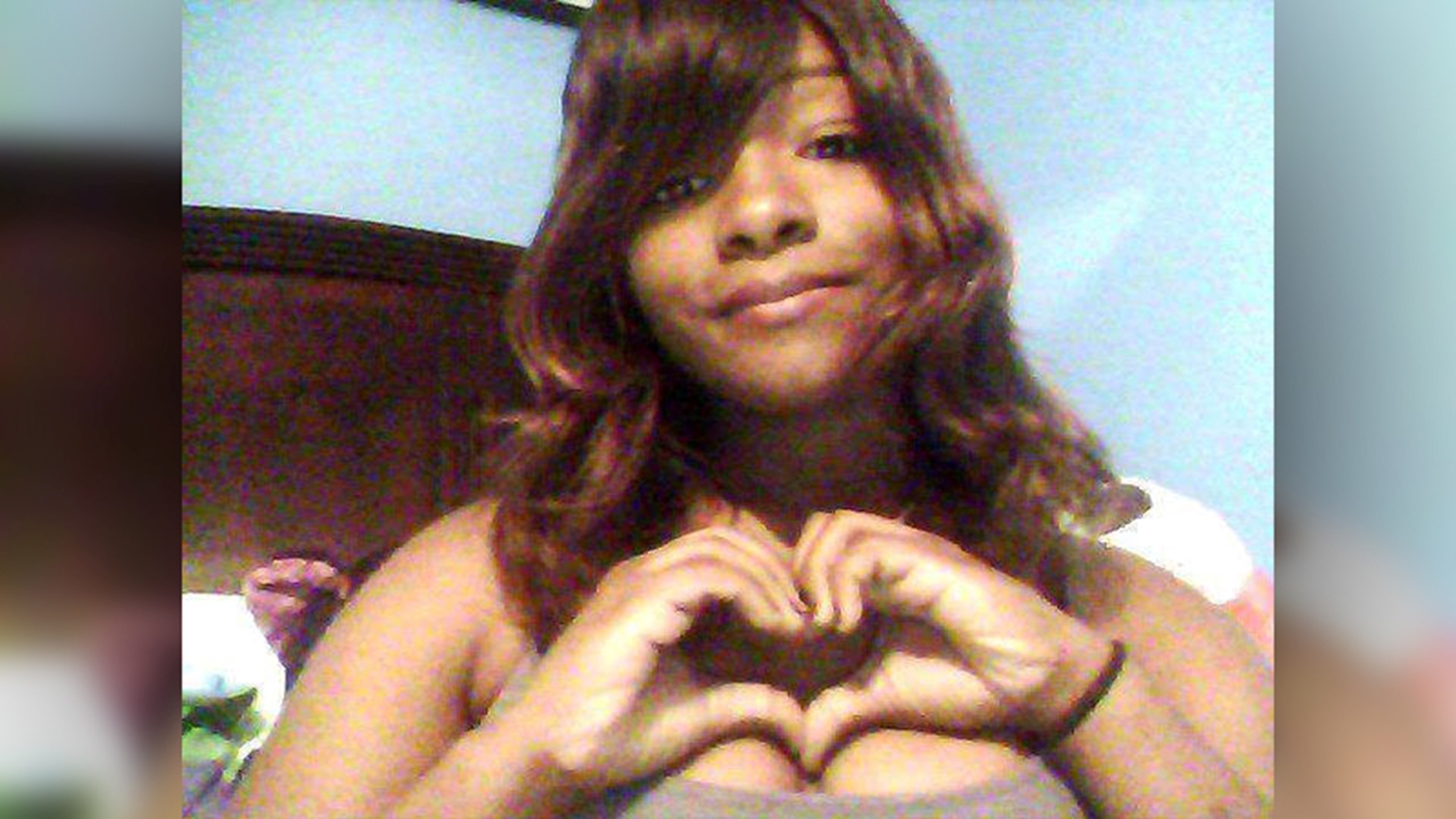 A grainy jailhouse video captured some of the last steps Nimali Henry took before she died.

The video, played during the prosecution of the four ex-deputies accused of neglecting her, show Nimali as she deteriorated near the end of her 10 days in the St. Bernard Parish jail. Staggering, faltering and eventually passing out on a cold, hard bunk in an isolation cell.

Nimali was a 19-year-old mother when she died of a rare but treatable blood disorder as deputies ignored her pleas – and those of fellow inmates – to help the dying woman. Denied a trip to the hospital. Denied the medicine that would have saved her life.

“When I think about my sister's last hours, days, it just makes me very sick,” her sister Deshawna Henry said.

Nimali’s grandmother, Prisca Anslem, said, “I still have a hard time to sleep. I just can't understand how people could be so wicked.”

RELATED: Mom said deputy told her son would 'be all right' in jail; 4 days later he was dead

Court records show that Nimali was mocked by jailers who accused her of faking her illness. As inmates testified, she passed out, bleeding, even as they urged desperately deputies to help.

Nimali died on April 1, 2014. It took seven tense years, but in March, four of the former St. Bernard Sheriff's deputies who were responsible for Nimali were sentenced in connection with her death after pleading guilty.

“I don't want them to suffer from it,” Nimali’s younger brother Jah-Keim Isidore said after the sentencings, “but I want them to actually have a change in heart.”

But there's a lot more to the sequence of events that landed this high school senior in jail. For Nimali’s relatives, the sentences handed down to the deputies in March, don’t begin to serve justice for everyone who played a role in her death.

Nimali had just given birth to a baby girl, Nilijah, four months before she was arrested. She had already split up with the girl's father, Nicholas Conners, after a troubled relationship.

“He would often try to stop by the house. There was a time where even they had to try to get a restraining order,” Deshawna Henry said.

When she was 3 months pregnant, Nimali called police after a fight at a Chalmette restaurant in which she accused Conners of breaking her cell phone and yanking her earrings from her ears. A police report shows she declined to press charges.

Things went very differently five months later. Nimali had just been released from the hospital when she tried to get her baby, who was now four months old.

Henry had just been released from a hospital stay for her illness when she returned home to find Conners with a new girlfriend, Chelsea Lefebvre. A police report from that confrontation on March 19 states that Conners told deputies that Nimali became irate and punched Conners in the face “with a closed fist.”

The report goes on to state that Conners initially told deputies he didn’t wish to pursue charges but “later on that day Mr. Conners called back…and stated that he changed his mind and now wished to pursue charges against Ms. Henry.”

In a subsequent confrontation two days later, Conners was with Lefebvre and the baby at Lefebvre’s house. They gave Nimali the address, but when she arrived, they refused to let her see her child, according to a police report and cell phone video of the encounter. There was a skirmish between Nimali and Lefebvre, and Conners called the police.

“I feel like they pretty much trapped her into a situation,” said Nimali’s uncle, Kerwin Walters.

Nimali left before deputies arrived. Conners initially said he didn't want to press charges, a police report states. But later, after Nimali went home without her baby, Conners called the sheriff's office and said he had changed his mind.

“She still had the bracelet from the hospital on her wrist at the time of being arrested,” Walters said.

“It could have been stopped immediately. But obviously they wanted her to go to jail,” said Barry Bernadas, a former FBI analyst who was the first to urge federal authorities to look into Nimali’s death.

Nimali's bail on her three relatively minor charges – simple battery, disturbing the peace and unauthorized entry – was set at $25,000, more than her family could afford. Judge Jeanne Juneau has never responded to our calls for an explanation of the bail amount.

In previous stories, WWL-TV documented that the bail Juneau set on Nimali's charges was the highest amount set for those offenses, and even more serious ones, of any judge in any case in that parish all of that year.

The same month Juneau set bail at $10,000 on a man booked with disturbing the peace and an additional and far more serious charge of aggravated battery. In August that year, she set bail at $13,000 on man booked on the exact same charges as Nimali, even though that man had prior arrests compared to Nimali's clean record.

“Somebody needs to look into why the judge gave that high bond,” Bernadas said.

Bernadas, retired from his job as a civilian analyst with the FBI, first alerted authorities after hearing from inmates about Nimali's death. As the FBI launched its civil rights probe, Bernadas said he received text messages that alarmed him.

“Right after I started looking into the case, I got text messages from Judge Juneau asking me to come meet with her,” he said.

Bernadas tried to put her off, but he said the judge persisted.

“All those text messages were given to the FBI,” he said.

Judge Juneau isn't the only key figure who has maintained a seven-year silence about this case. St. Bernard Sheriff Jimmy Pohlmann has repeatedly declined to comment. But that wasn't always the case.

A sheriff's denial, then seven years of silence

When WWL-TV began investigating this case, Pohlmann came to the station’s offices on Rampart Street. Pohlmann urged the station not to do a story, saying Nimali died of natural causes and any other allegations were coming from a political rival, presumably Bernadas.

More recently, a Sheriff’s Office spokesperson said Pohlmann couldn’t talk about the case because it is the subject of ongoing litigation in the form of a civil lawsuit.

While the federal probe into Nimali's death proceeded slowly, other actions by Conners and family moved quickly.

In May 2014, Lefebvre called police to complain that Conners was harassing her after they broke up, according to a police report of that case. The following month, Conners went to court to file succession papers, claiming Nimali's property and establishing himself as the baby's sole custodian. And in January of 2015, he filed a wrongful death lawsuit against the sheriff's office on behalf of his daughter.

The suit asks for $13 million dollars in compensatory damages, plus an additional $5 million in punitive damages.

Maternal family left in the cold

Nimali’s relatives have filed no lawsuits and have been almost completely cut off from Nilijah, now seven years old.

“We couldn't even have Nilijah for the funeral. We couldn't take her with us,” Deshawna Henry said.

Other than a chance encounter at a dentist's office by Nimali's grandmother, the family says they have never been given an opportunity to see Nilijah despite many of Nimali’s relatives living just minutes away.

Walters lives in California, raising a daughter the same age as the niece he has never met. He said it is painful to think about her absence from his family’s life.

“We want you in our life so bad it hurts,” he said.

In the weeks after Nimali’s death, Walters reached out to Nicholas and Nicholas' parents, who are raising the child, asking for a chance to meet.

A long series of text messages reveal that Walters’ texts went from friendly to despondent as Nicholas and his parents avoided him. At one point, they promised a meeting but never showed up, leaving Walters waiting for hours. Walters returned to California.

But Conners and the family raising Nilijah have not been completely quiet. They are behind a website called “Justice 4 Nimali.” The site updates the criminal case, raises money for a billboard campaign and advocates for criminal justice reforms.

Nimali's family says it has nothing to do with the website, even though the name "Justice For Nimali" is identical to the Facebook page Deshawna created for her sister in the early stages of the FBI investigation.

Nimali’s family believes the website is an attempt to hijack their name and capitalize on their grief.

“Now you're promoting Black Lives Matter?” Walters asked “Because the mother's life didn't matter when you called the police and sent her to jail.”

“They were asking for money at a time when we're fighting for justice,” Deshawna Henry said.

Our request for an interview with Conners and his family was denied. But their attorney, Andrew Bizer, offered the following statement:

“We ask that you respect our privacy regarding our interfamily matter. It is a complicated, multi-layered issue and we feel it is detrimental to Nimali’s daughter to discuss the details in the media. We are hopeful that a reconciliation takes place in the future when the trauma on all sides is properly dealt with. Our primary focus has always been the physical, mental health, and well-being of Nimali's daughter. She is a bright, funny, happy, wise, and very aware seven year old. She has now joined us in the fight for justice for her mother and will be a force to be reckoned with as she grows up. Everything we do, in all aspects of our life, including this fight for justice, we do for her and Nimali.”

Before the four deputies were sentenced in March by U.S. District Judge Ivan Lemelle, he heard victim impact statements. One by one, over two grueling days, Nimali's relatives offered heartbreaking accounts of their pain and their loss.

Nicholas Conners and the family raising young Nilijah were silent. But they did make public one request: restitution from the defendants.

Court transcripts show one exchange in which Lemelle asks about that request of more than $300,000, prompting the judge to point out that restitution law in this kind of case only provides for concrete expenses, such as a funeral.

Nicholas Conners and his family did not contribute to the funeral or burial of Nimali, her family said.

The former straight-A student is buried far down the Mississippi River in a remote spot in Plaquemines Parish. Her family described scrambling together resources for a proper funeral service and accepting a donated burial plot.

“So our side of the family does not exist. But you're going to reap and try to reap a significant benefit from that loss?” Walters asked.

“That's what Nimali died for, for them to have money,” Anslem added in the thick accent of her native U.S. Virgin Islands.

Bizer, however, was adamant that any money generated by the lawsuit would be placed in a trust exclusively for Nilijah.

“Any allegations that her guardians are motivated by personal financial gain are not grounded in the facts or the law,” he wrote in an emailed statement.