Some believe Duke Energy’s unlined coal ash basin on Lake Norman, and the hundreds of tons buried under homes, roads, driveways and businesses from when it was sold 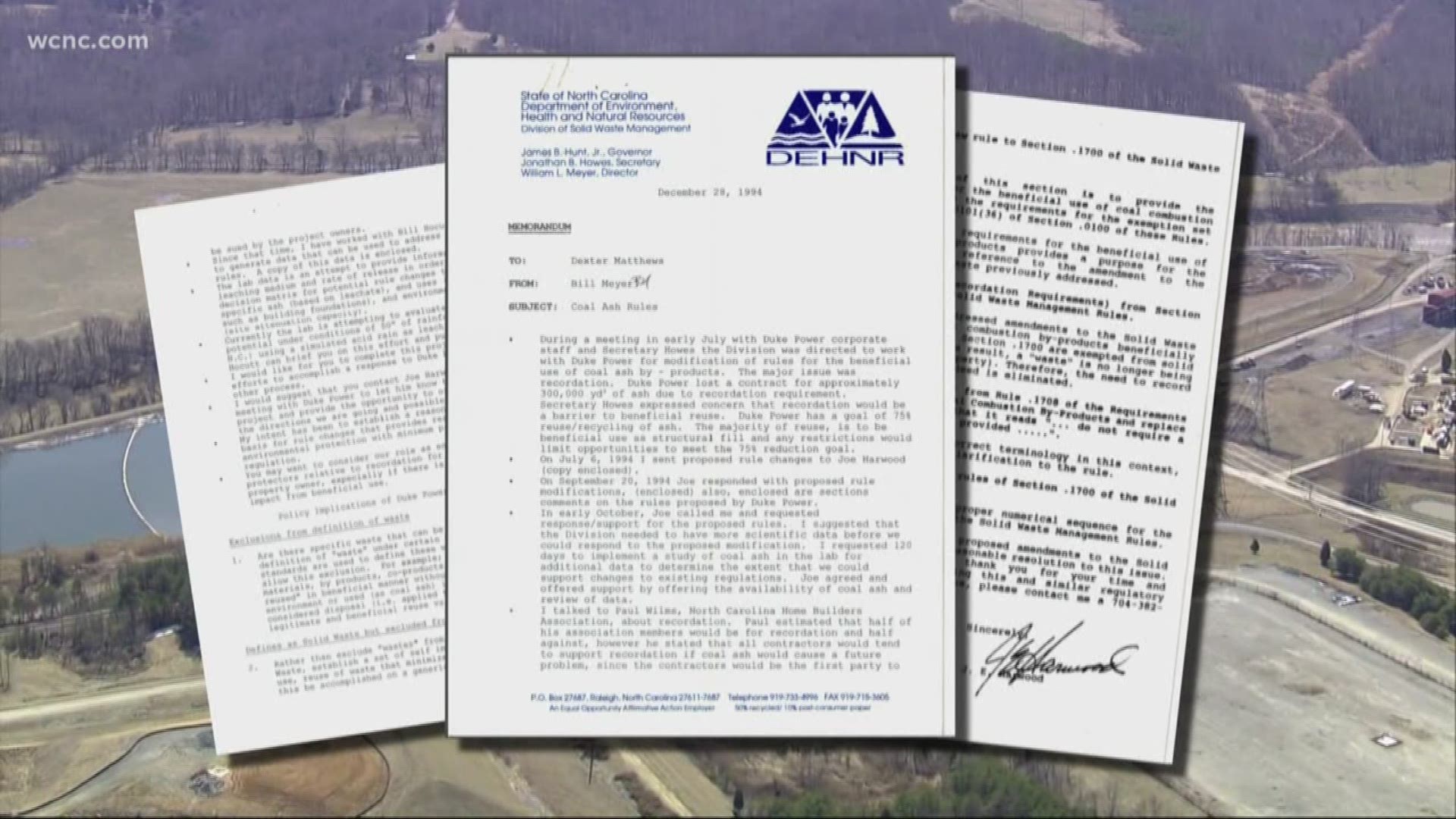 The documents were released in the midst of an investigation into whether coal ash could be the cause of a reported cancer cluster in Mooresville, where much of the ash was used in construction projects.

It was allowed back then, and was regulated by the state, but the newly released correspondence from 1994 shows Duke Energy wanted to sell it without having to report where it was going.

In the letters, Duke Energy petitioned state leaders to change the rule mandating redecoration, saying those requirements were quote “a barrier” to their ability to sell it in large quantities.

The power company asked that the rules be rewritten, to exempt the ash from being classified as “solid waste," therefore "eliminating the requirement to record its use on property deeds."

This despite the state health department’s documented retort that the ash contains toxic byproducts like arsenic, chromium, and lead, and that the recordation rule was in place to “provide notice to future property owners of potential environmental contamination," and for “worker safety…with respect to inhalation.”

A quarter-century later, an investigation is underway into a recently-discovered thyroid cancer cluster in Mooresville.

Some believe Duke Energy’s unlined coal ash basin on Lake Norman, and the hundreds of tons buried under homes, roads, driveways and businesses from when it was sold as construction fill, could be the cause of the cancers.

Town leaders say not all coal ash sales were recorded, so there’s really no knowing where it all went.

"Folks who were building homes, gardeners sometimes, could go up and get a truckload of coal ash," Senator Vicki Sawyer told WCNC Defender Savannah Levins. "Those were not documented."

But others argue the letters appear to show a long-standing attempt by Duke to sell, but don’t tell.

And even though we now know state leaders recommended additional testing decades ago due to concerns about coal ash’s toxicity, still no research has directly linked – or ruled out – coal ash as the cause of these cancers.

For that reason, many community members are now pushing for more studies to be funded.

In response to the release of the letters, a Duke Energy spokesperson told WCNC Charlotte:

"It’s important to remember where we were at the time – in 1993, the U.S. Environmental Protection Agency had just advised Congress that coal ash should be regulated as non-hazardous, which remains the case today.

Coming out of that guidance, North Carolina state policy encouraged utilities to safely recycle coal ash in structural fills and other beneficial uses. It appears this is one small snippet of a routine conversation with regulators about the paperwork to accompany such re-use. It was a constructive dialogue and the rules did not change – such records were required. Our record-keeping and our ash reuse programs have been conducted in accordance with all state regulations, which set out how ash could be used in ways that are safe for people and the environment.

What’s much more important than one fragment of a 25-year-old conversation about rules is what a very strong body of science tells today:

The concentrations of nearly all trace elements in coal ash are below the levels established by the EPA as safe for residential soils – levels that are protective for daily exposure by adults and children. Coal ash is well-studied and similar to what’s found already in North Carolina soils.

Health experts researching these local concerns reviewed the medical literature and confirmed there is no known connection to the ingredients of coal ash. Multiple universities and research groups continue to look into this topic, and none have found any connection between coal ash and health concerns.

Decades of scientific monitoring in and around Lake Norman make it clear that people and the environment are well-protected from coal ash impacts."