The Defenders investigate lack of bilingual officers in Charlotte

Our investigation found there's only one bilingual officer for every 1,700 Hispanic people. Latino advocates say some crimes are not being reported because of the discrepancy. 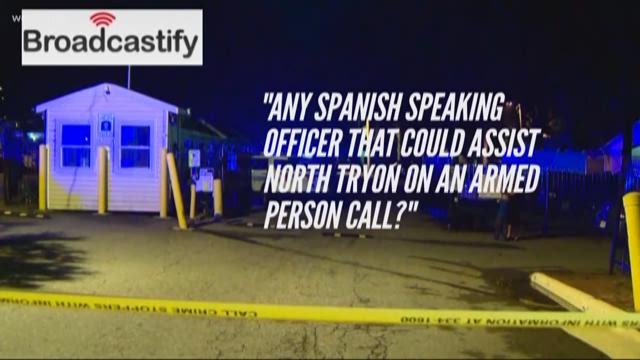 CHARLOTTE, N.C. -- A Defenders investigation is shining a spotlight on your safety.

There’s an urgent question you need to ask yourself: Would you report a crime if the responding officers did not speak your language?

Our investigation found there's only one bilingual officer for every 1,700 Hispanic people. Latino advocates say some crimes are not being reported because of the discrepancy.

You can find signs in Spanish all around the city, including at the entrance to the Charlotte Mecklenburg Police Department. There’s a translation outside the door telling people to buzz in. Now people are asking why more officers don’t speak Spanish.

“Often officers show up and they don’t speak the language,” said Hector Vaca, a Latino advocate with the organization Action NC.

The Defenders investigation highlighted his point: 75 out of 1,800 officers are bilingual, according to CMPD. That's roughly four percent. Hispanics make up 13 percent of the population in Mecklenburg County according to census estimates. Of course, some of the Hispanic people speak English as well, but Vaca said others likely aren’t reporting crimes.

A deadly officer involved shooting last year also highlighted the language barrier. In police body camera video, you heard a few words in Spanish from an officer. However, before CMPD Officer David Guerra fatally shot Ruben Galindo, he had asked for a Spanish speaking officer on scene.

“You could tell from the video Officer Guerra does not speak the language well,” said Vaca.

In the end, the officer was cleared of criminal wrongdoing. The District Attorney determined Galindo was mentally unstable, impaired and failing to obey officer commands. However, Vaca wondered what would have happened if a Spanish speaking officer was on scene.

“Maybe Ruben never would have died had we had officers who speak his language,” Vaca said.

Vaca said it’s a public safety concern no matter what language you speak.

“When people are not afraid to report crimes our community is safer, because more people who commit crimes will be taken off the streets,” said Vaca.

CMPD declined an interview for the story. However, CMPD sent a statement saying they can also use a city-contractor to translate if a Spanish speaking officer is not available.

The department told NBC Charlotte they’re aggressively recruiting Spanish speaking officers. They encourage anyone who is interested to apply at this link: