Woman died homeless while Oregon held $800,000 of her unclaimed money

Friends and acquaintances said they had no idea Cathy Boone had money available to her. 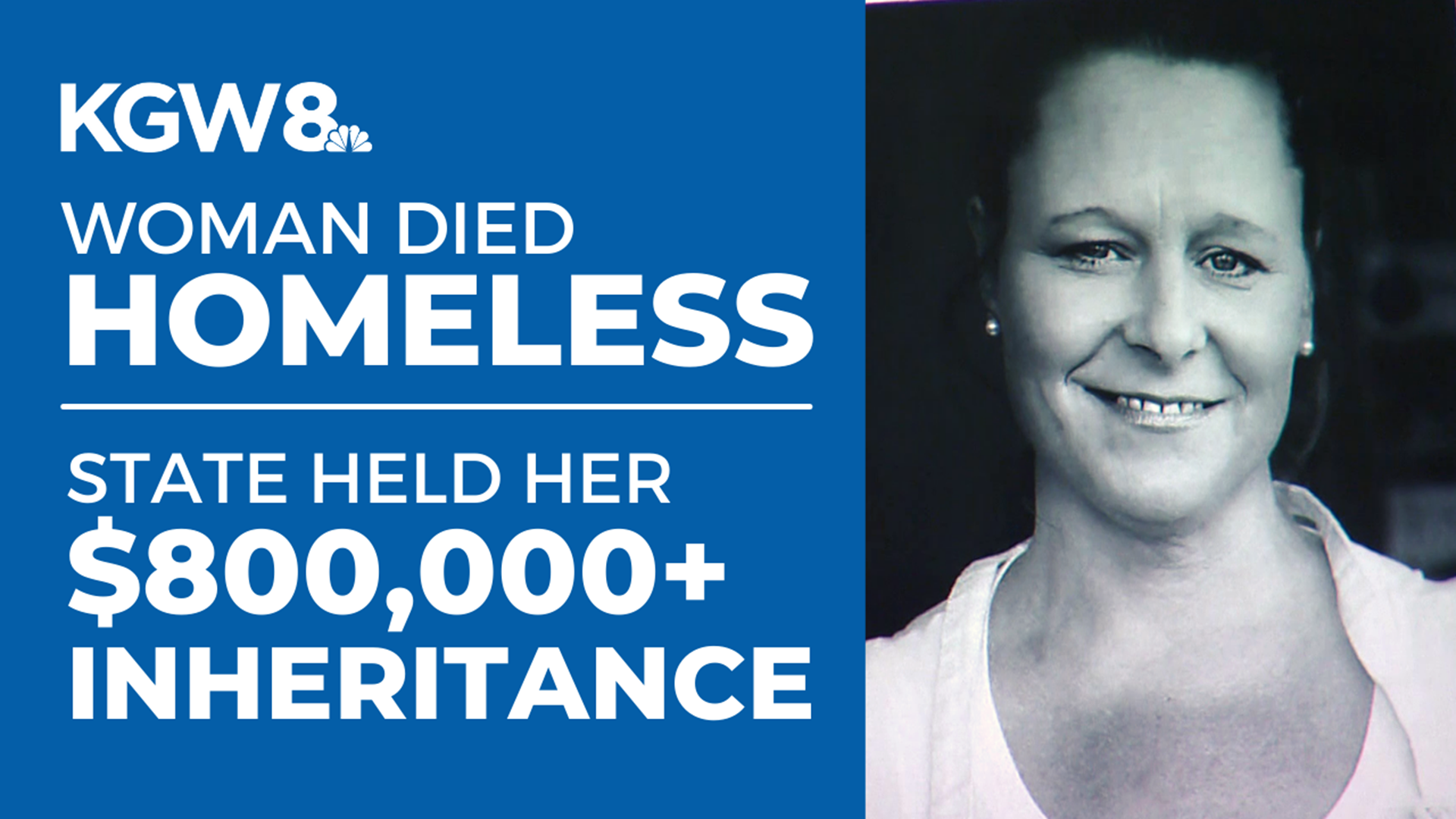 PORTLAND, Ore. — Cathy Boone died homeless. She’d been living on the streets of Astoria despite inheriting a small fortune. The state of Oregon held more than $800,000 of her unclaimed money when the 49-year-old passed away in January 2020.

“It just didn’t make any sense to me. That money was just sitting there, and she needed help in the worst way,” said Jack Spithill, Boone’s father.

Boone struggled with mental health issues and drug abuse, according to her father.

“She had a rough life but when she was good, she was really good,” explained Spithill.

Boone was a regular at the Astoria Warming Shelter. Unlike most visitors who slept in their clothes, Boone would take the extra effort to put on her pajamas at night, explained friends.

“She was a special person as far as I’m concerned,” said Donny Holder, who often shared cigarettes and coffee with Boone at McDonald’s.

“She was a sweetheart,” said Holder, who carries photographs of Boone, wrapped in a tattered Ziplock bag in his coat pocket. “I fell in love with her.”

Friends and acquaintances said they had no idea Boone had money available to her. She struggled to survive, like many others living unsheltered in a harsh outside environment.

“We all have our moments but for the most part she had more smiles than cries,” said Glen Lonquist, a friend of Boone’s.

Catherine Boone, known to friends as Cathy, grew up in the Portland area.

Her parents separated when she was young. Her father, who remarried and lives in Texas, tried to stay connected to his daughter.

Boone struggled in her adult life.

“I attribute it almost all to drugs, but I think she also had some mental health issues and the combination of the two didn’t work out for her very well,” explained Spithill.

For several years, Boone volunteered at the nonprofit Sisters of The Road Café in downtown Portland before moving to Astoria, where her mother lived. In 2016, Boone’s mother, Patricia Lupton, passed away. Cathy relapsed into drug abuse, according to her father.

“When she didn’t have any connection to family or friends, and she was using drugs then I think she was a truly lost soul,” explained Spithill.

Court records show after her mother died, an attorney and personal representative assigned to her mother’s estate tried to locate Boone. They took out advertisements in the local newspaper, messaged her on Facebook, emailed family members and tried reaching Boone by phone. A private investigator hired to find Boone also came up empty.

In July 2019, a Clatsop County judge ordered $884,407 of the estate’s assets be sent to the Department of State Lands, which handles unclaimed money from estates where heirs cannot be located or refuse payment.

It is not clear if Boone ever knew the money was hers or if she understood how to get it, according to her father.

“I don’t think she would approach them on her own but there were enough people who could have given her some help,” said Spithill.

Boone’s father regrets that he wasn’t able to help Cathy, nor was anybody in the court system or local police. He wishes someone could have stepped in to help Cathy take the first step toward reclaiming her life.

“I think my failure to recognize her mental health issues. I kind of gave up on her because of the drugs and shouldn’t have done that,” said a tearful Spithill.

RELATED: Where do homeless people go when camps are removed in Portland?

Rosin explained guardianship is only appropriate and legally allowable in Oregon when a person is so profoundly cognitively impaired that they are incapacitated.

Guardianship is a last resort. It essentially removes the ability of a person to make their own decisions and given that authority to someone else who then has the power to decide where they can live, what medical care they receive, where they can go, who they can see and basically everything else in their life.

Many services can be obtained voluntarily, like mental health counseling and drug and alcohol treatment. But, in those cases, the person must want treatment for their condition.

Baker said sometimes the criminal justice system gets involved due to minor crimes. Health workers can help through mental health and substance use disorder treatment courts.

Another option could have potentially been a civil commitment by local behavioral health program, although the requirements are often more difficult than the standard for guardianship.

In the end, health experts say the bar is very high to force treatment.

On January 13, 2020, Boone had breathing problems while staying at the Astoria Warming Shelter. An ambulance rushed her to St. Vincent’s hospital in Portland where she later died.

In October, Oregon Department of State Lands paid $884,000 to the personal representative of the estate of Cathy Boone. Court records indicate the estate is working to identify all persons who might have claims to the money, including her two biological children.

The Oregon Department of State Lands, the agency which handles unclaimed money from estates where heirs cannot be located or refuse payment is not responsible for finding known heirs. Instead, the state agency is simply required to hold the money, until the person entitled to it comes forward.

“Given a year and a half of effort taken by the personal representative and the attorney for this particular estate, there really isn’t much more that the state could do,” explained Claudia Ciobanu, unclaimed property manager with Oregon State Lands.

Ciobanu said the money was sitting and waiting for Boone prior to her death. She just needed to claim it.

“This is a unique case and we sympathize with the family,” explained Ciobanu.

“We're not just statistics,” said Johnathan Kvale, a friend of Boone’s who is no longer unsheltered. “These are good folks. It’s just circumstances.”

Sometimes the system just isn’t equipped to get people the help they need, even if they’re sitting on a small fortune.

“There’s got to be more out there — more just like her,” said Cathy’s father.