Attorney Chantel Cherry-Lassiter detailed the video, which the family watched several times. "Let's be clear, this was an execution," she said. 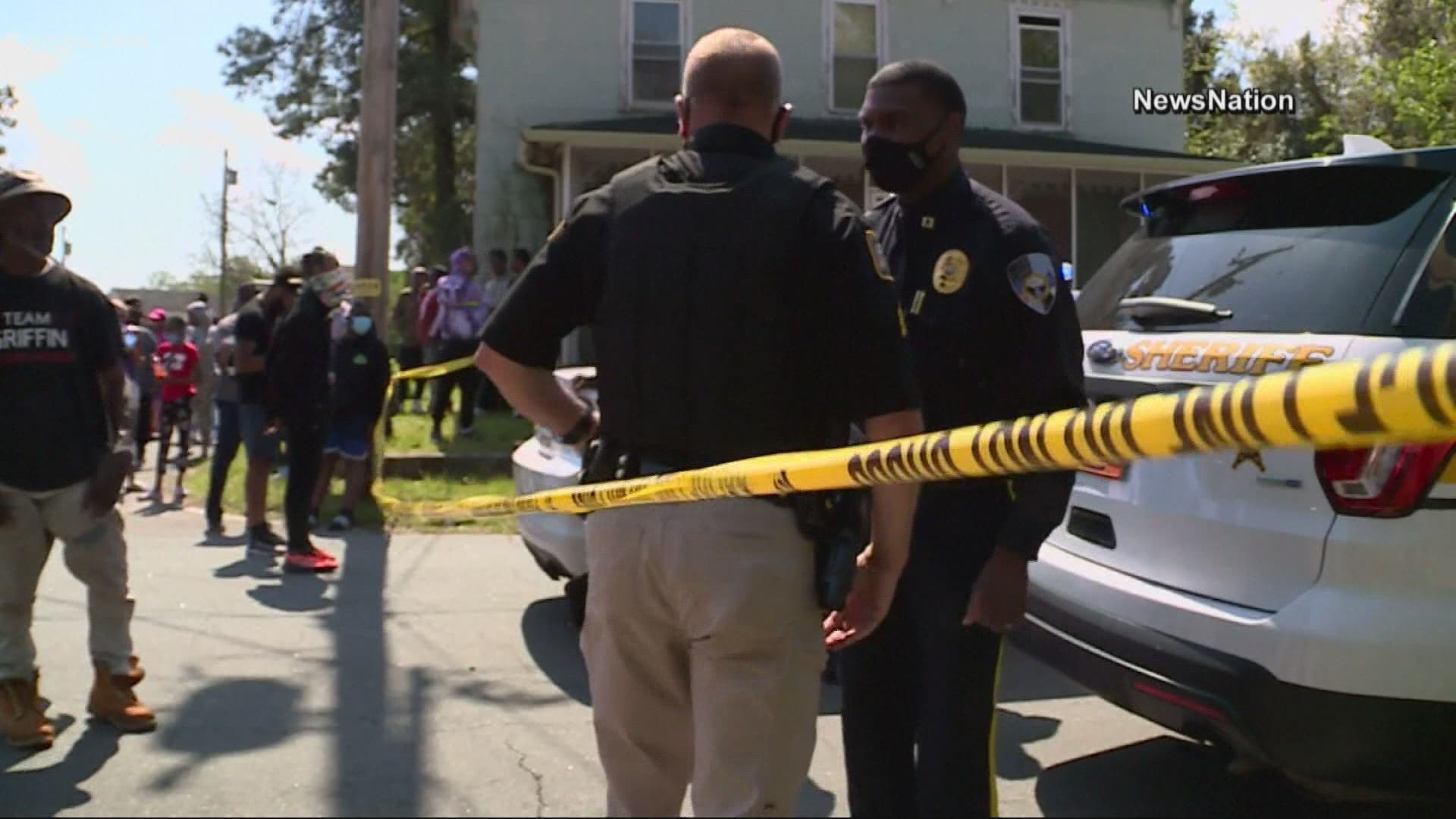 ELIZABETH CITY, N.C. — Civil rights attorneys revealed that the family of Andrew Brown Jr. were able to watch about 20 seconds of body camera footage of the shooting in Elizabeth City where Brown was shot and killed by a deputy.

The family saw the footage Monday at 1:30 p.m. at the Pasquotank County Sheriff's Office.

"Let's be clear, this was an execution," she said.

The family was originally supposed to view the video earlier Monday morning, but the viewing was pushed back when attorneys said authorities needed to redact parts of the video before it could be viewed.

When the family came out of the sheriff's office, their attorneys said the footage came from one deputy's body camera footage, but there should have been footage from more than one deputy.

National Civil Rights Attorneys Ben Crump, Bakari Sellers and Harry Daniels were in Elizabeth City to support the family and speak to the community.

The attorneys said Brown's family did not feel that they'd been offered transparency.

"They're shooting and saying, 'Let me see your hands' at the same time," she said.

She said she saw numerous assault rifles, and saw deputies still shooting at Brown after he had driven around deputies and crashed into a tree.

"He was trying to evade being shot," Cherry-Lassiter said.

Attorneys say they learned an hour ago that the Pasquotank County Sheriff’s Office says it’s making “redactions” to the body camera video before they show it to the family @13NewsNow pic.twitter.com/vJR2scpydt

Ben Crump and Bakari Sellers are calling for a change to the North Carolina law that requires a court order to release body camera video.

“We’re going to see the video to know what they’re hiding from all of you. We need all of y’all speaking truth to power” - Crump @13NewsNow pic.twitter.com/HKmSSfBqUK

Here's what attorneys had to say before the video came out.

“What you tell them, as painful as this is going to be, it is necessary that we have transparency to get to the truth. Because the truth is the foundation for justice," said National Civil Rights attorney Ben Crump.  “You know it’s something bad on that video if they put seven deputies on administrative leave, two deputies resigned and another took early retirement. There’s something on that video that they are trying to delay releasing that video because they don’t want us to see it."

Pasquotank County Attorney R. Michael Cox released a statement with reasons for the redactions, which he said are "necessary to protect an active internal investigation."

“We’re glad that state law allows us to provide a private viewing of the body camera footage to the family of Mr. Brown and after we received their request on Sunday evening, we began working immediately to make that happen as soon as possible. The law also allows us to blur some faces on the video and that process takes time. Pursuant to N.C. Gen. Stat. Section 132- 1.4A, this may be done when necessary to protect an active internal investigation. As soon as these redactions are complete, we will allow the family to view this footage. We hope this occurs today, but the actual time will be driven by the completion of the redactions. We are also continuing to seek transparency within the law and continue our efforts to get a court order that would allow the video to be released to the public."

Over the weekend, Pasquotank County Sheriff Tommy Wooten and the chief deputy asked NCSBI if the release of the body camera footage would impede their investigation.

Wooten officially petitioned a court Monday to release the footage. 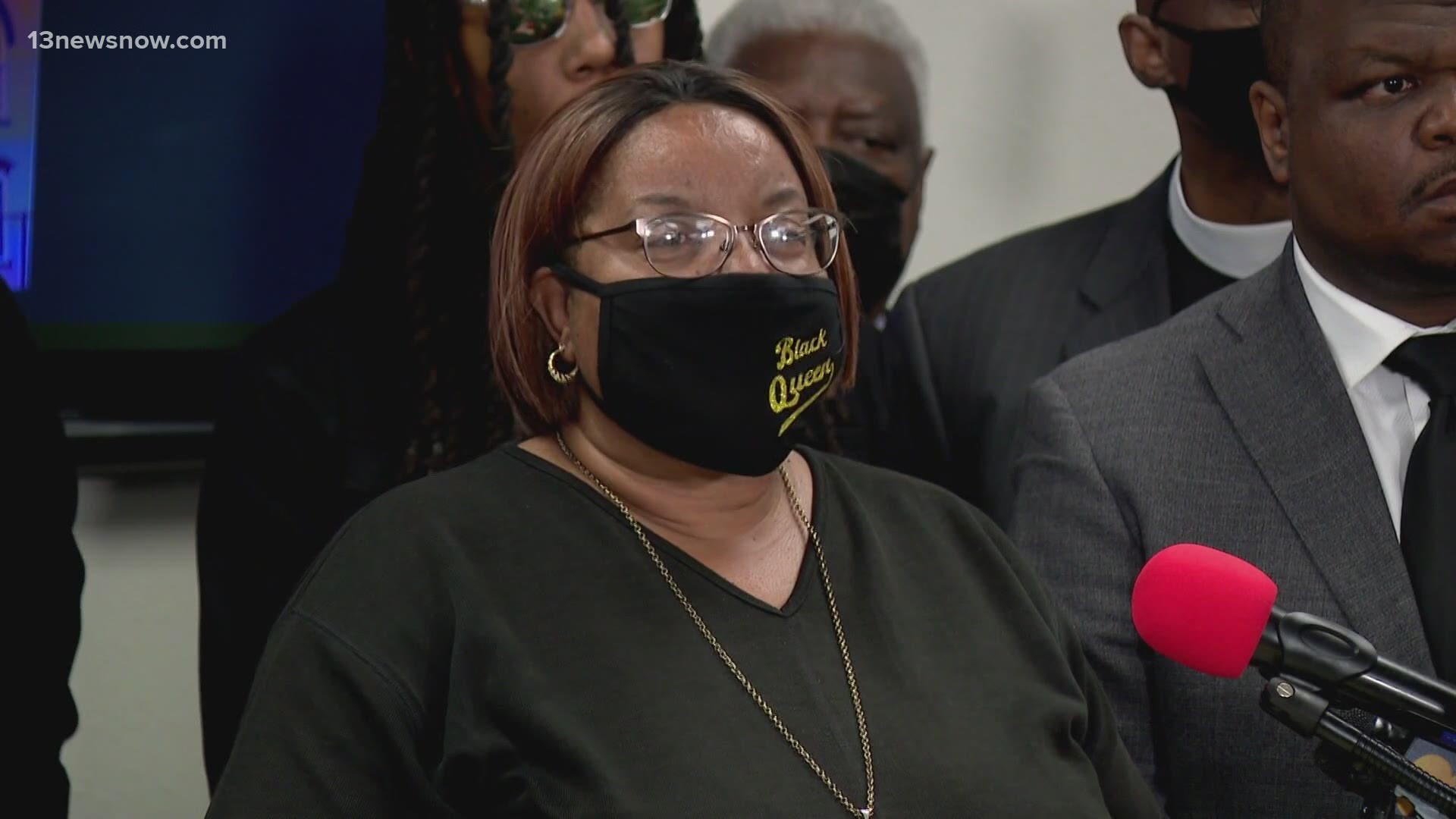 According to Pasquotank County Manager Sparty Hammett, seven deputies are on paid administrative leave, while three have resigned from their positions.  One of those resignations was a retirement option.

The three resignations were unrelated to the shooting, according to Pasquotank County Sheriff's Administrative Assistant Heather Carawan.

Pasquotank County only has about 55 sworn deputies total, according to Maj. Aaron Wallio with the Sheriff's Office.

Witness accounts claim that Andrew Brown Jr. was shot in the back and killed as he was trying to drive away.

"He was driving off, trying to get away," said neighbor Demetria Williams, who said she witnessed the shooting Wednesday morning.

Williams, who said she knew Brown for many years, said law enforcement parked a car in Brown's driveway in order to block his exit. She said Brown drove through his yard when deputies opened fire. At the scene, tire marks can still be seen where witnesses say Brown tried to drive away.

The sound of gunshots prompted Williams to come outside, and she is glad she was there to witness the shooting, as calls grow for the release of the body camera footage.

"Justice can't be served if they are sweeping things under the rug," she said. "Why not release [the video]?"

Brown's car crashed into a tree in Michael Gordon's yard.

Gordon showed 13News Now where a bullet pierced through his living room and into the kitchen. A bullet hole rests right above a loveseat where Gordon's wife normally sits, but she was at work.

Gordon, a veteran, was visiting his brother.

“I just thank God we weren’t here," he said. 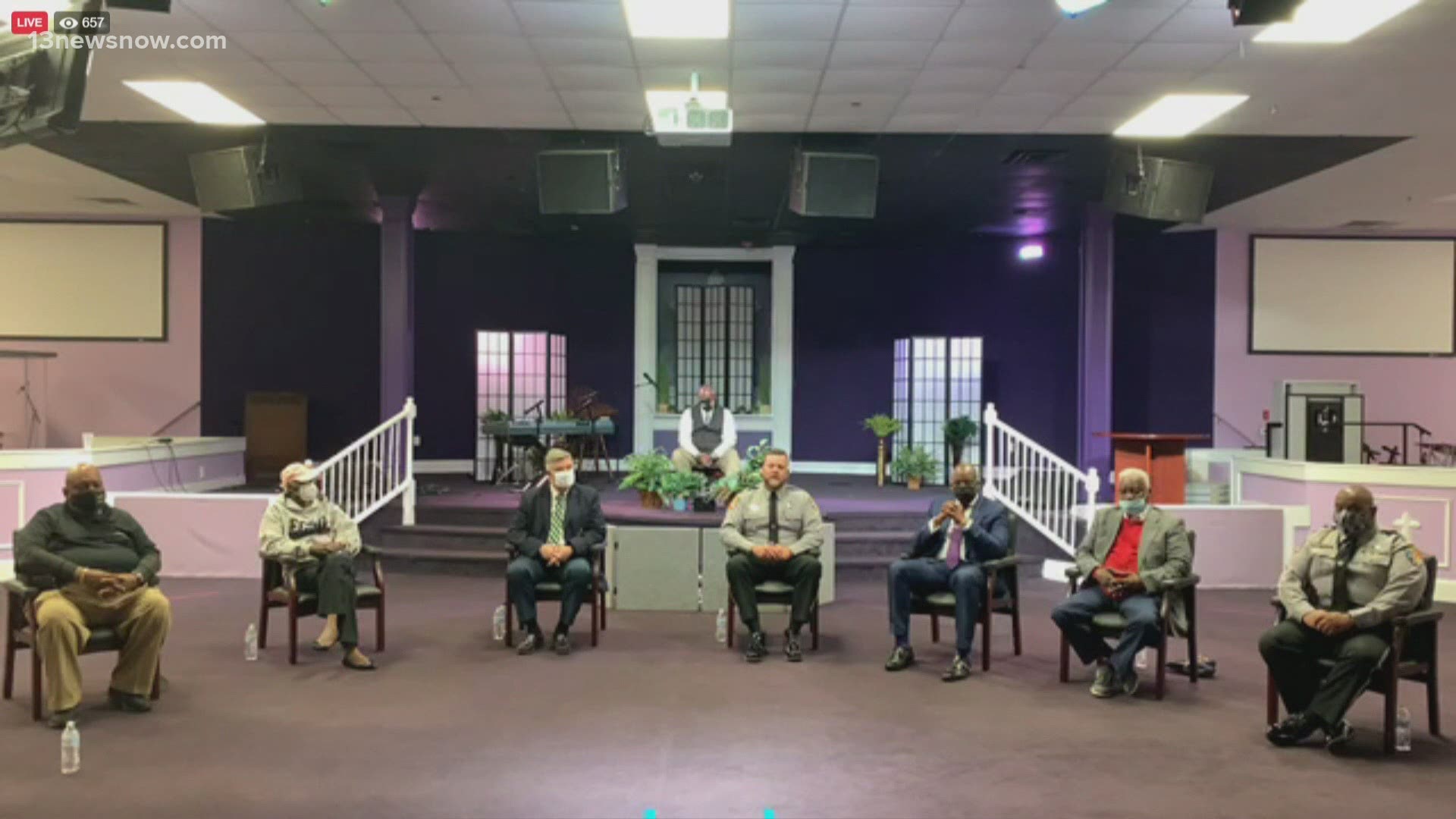 Gov. Roy Cooper was among those calling for the swift release of the body camera footage, saying that initial reports of what happened “are tragic and extremely concerning.”

Initial reports of the shooting in Elizabeth City and death of Andrew Brown, Jr. this week are tragic and extremely concerning. The body camera footage should be made public as quickly as possible and the SBI should investigate thoroughly to ensure accountability. 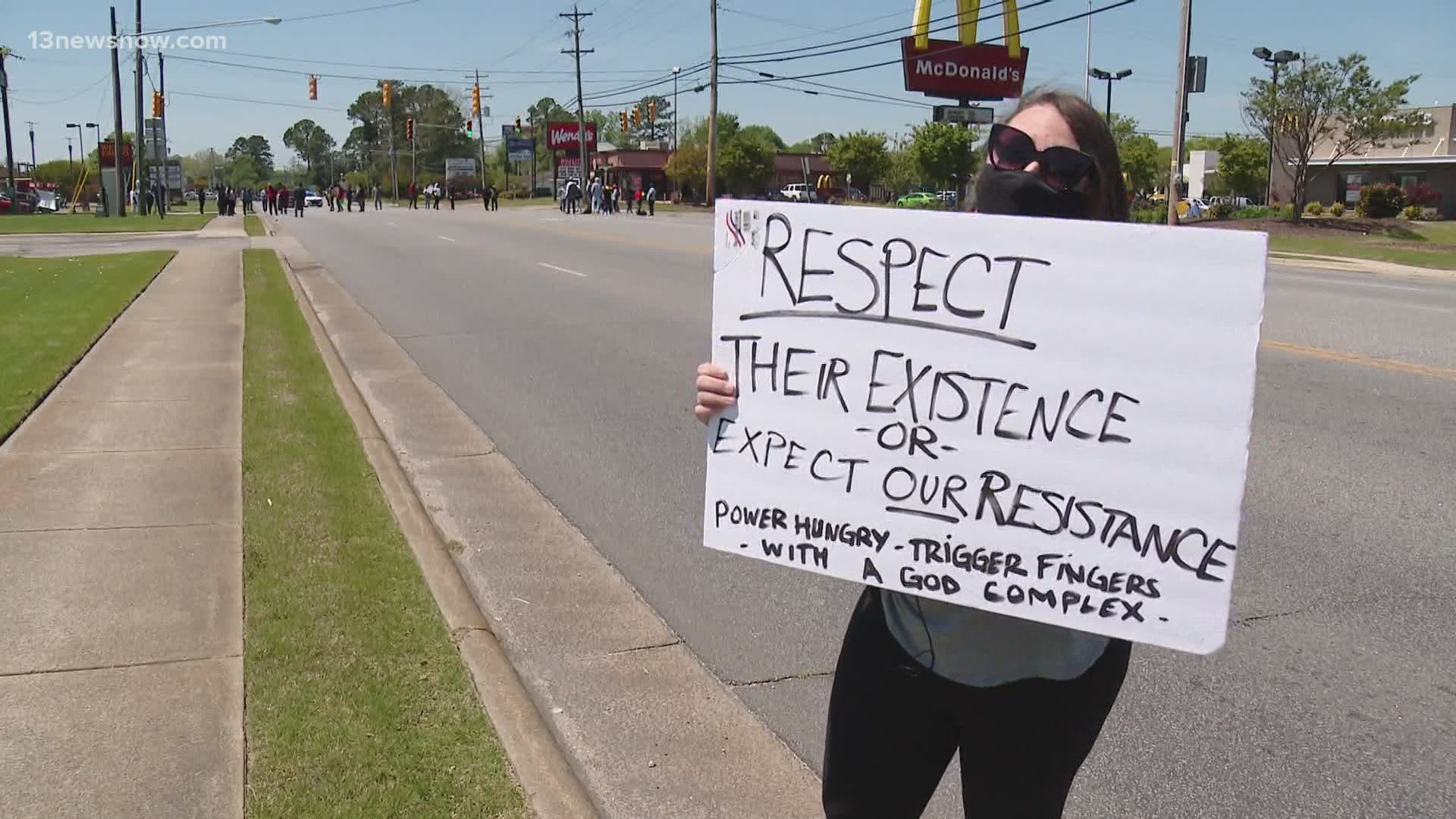 When asked in a text if the body camera footage could be released in a couple of days, Pasquotank Sheriff Tommy Wooten replied, "We are trying."