CHARLOTTE, N.C. — For the first time since Scott Brooks was shot and killed outside the restaurant he co-owned with his twin brothers, Brooks Sandwich House reopened Saturday in Charlotte's NoDa neighborhood.

For the past two months, the popular restaurant had become a place for people to grieve and remember. Now it is again a place to eat and celebrate.

"He didn't care what you did, what color you were, it was just quality in the heart," David Brooks said while remembering his brother.

David has suffered deeply. The two suspects wanted for the killing of his brother remain at large.

Despite the ongoing investigation, David said the outpouring of community support has been overwhelming.

Whether it was the "Too Blessed to be Stressed" craft beer created in Scott's honor, or the mural painted in Scott's image, David said it all moved him.

"It was absolutely amazing. Words can't describe the feelings in my heart for people around the NoDa area. They just reached out with both arms everybody."

RELATED: Scott Brooks to be remembered with NoDa craft beer

"The memories, they're never going to be erased, you feel like there's a time where you have to move on and this is a good memorial to my brother."

It's time for Brooks to reopen

The open sign at Brooks Sandwich House flipped on Saturday at 10 a.m.

David and Scott had been running the three-generation, family owned business that was started by their father, CT, in 1973. The small, counter-serve restaurant is known for its burgers, hot dogs and chili.

"They can beat you up but they can't beat you down," David Brooks said as he took in the long line of anxiously awaiting customers.

One of those loyal customers was James Robinson, who has been eating at Brooks for decades.

"Scott is looking down on us right now and I'm sure that this is what he would want," said Robinson.

David Brooks said the reopening Saturday would not have been possible without the support of the entire Brooks family.

The restaurant is normally not open on Saturdays, but they made a one time exception.

The restaurant will be open from 10 a.m. to 5 p.m. Monday through Friday going forward.

Moving forward, Brooks Sandwich House will not be serving breakfast. 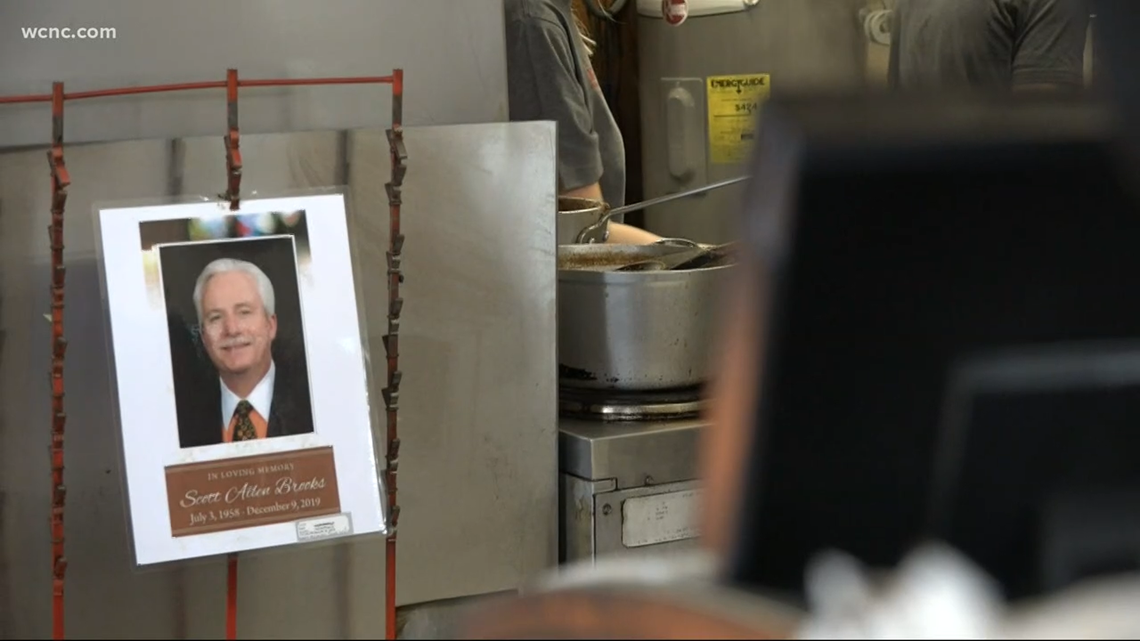 David Brooks said the family is asking the public to again take a good look at the two suspects seen in surveillance video recorded early on December 9.

Police are still looking for the suspect, who authorities believe were attempting an armed robbery of Scott Brooks as he showed up to open the cash-only restaurant.

"You know who you are, let the lord be the judge but I can certainly forgive you now, but please turn yourself in," David Brooks pleaded.

The Charlotte-Mecklenburg Police Department and the Charlotte office of the FBI are offering a combined $21,000 reward for informing leading to an arrest.