A city commission says nine streets should be renamed, but Confederate monuments at an Uptown cemetery can stay with additional signage. 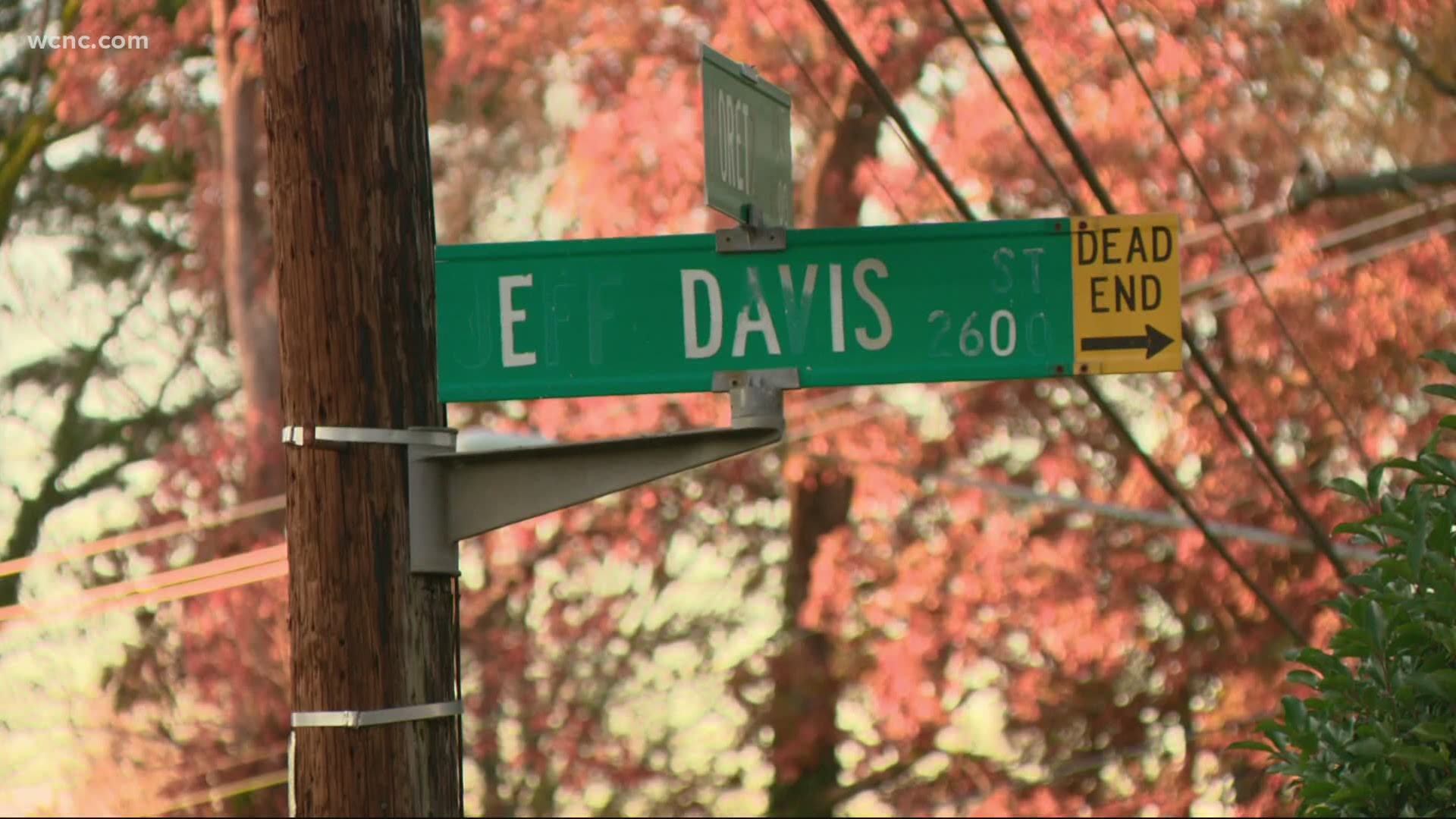 CHARLOTTE, N.C. — Nine streets in the City of Charlotte that were named after people with ties to the Confederacy, slavery, and white supremacy could soon be renamed.

The Legacy Commission, formed by Mayor Vi Lyles in June of 2020, will update Charlotte City Council with their report that recommends the streets be renamed, among other changes.

"We want to change the symbolic landscape to reflect the kind of city we aspire to be in the 21st century," said Emily Zimmern, chair of the commission.

Stonewall, Barringer, Jefferson Davis, & several other #Charlotte streets will likely be renamed. All of them were named after confederate soldiers, white supremacist, or slave owners. Tonight at 11, on @wcnc we went out to talk with those who have lived on them for decades. pic.twitter.com/qxcFQAXNNh

She moved to the street in April but says many of her neighbors have lived there for decades, including Stephanie Steele who lives across the street.

"I know it was Jefferson Davis which was a Confederate name," Steele said when asked if she knew the significance.

"It's time to change the name of the street," she said. "Jefferson Davis is gone and dead and buried, OK? Let somebody else's name be on this street."

Both neighbors are hopeful for action this time around.

"It is disturbing cause we live here and this whole area is predominantly Black," Cadena said. "Hopefully we'll get a new name."

"I think we have to confront our history to be able to change and create a better future," Zimmern said. "It's been a long time coming."

Zimmern and the commission she leads published a report Wednesday that will be given to Charlotte City Council as they're updated on the findings at their Dec. 14 business meeting.

.@CLTgov wants your feedback on this! At the bottom of this link you can make your voice heard before they vote on it. https://t.co/wlcABSFeqA @wcnc

In the report, the commission recommends renaming the nine streets and offer a blueprint for how the city should choose their replacements.

Some of those criteria include:

The report also gives examples of historically significant individuals who would fit the criteria, including Stonewall Street to be renamed after Julius Chambers, a Civil Rights activist and attorney who built one of the South's first interracial law firms. His law office was on Stonewall Street on the top floor of East Independence Plaza office tower, which he developed.

The City of Charlotte also has control over the Confederate monuments at Elmwood Cemetery in Uptown. The commission found it is appropriate for the monuments to stay, which tower over roughly 100 headstones marking the graves of confederate veterans.

.@CLTgov has a say as to what happens to this confederate monument at Elmwood Cemetery in Uptown. About 100 confederate veterans are buried here. What the commission feels should happen, tonight at 11 @wcnc pic.twitter.com/LKqKhGC2i1

However, the Legacy Commission recommended the city put signage up next to the monuments, giving context and explaining why they are there.

The city is asking for your feedback on the commission's findings. Please click here to make your voice heard at the bottom of the link.