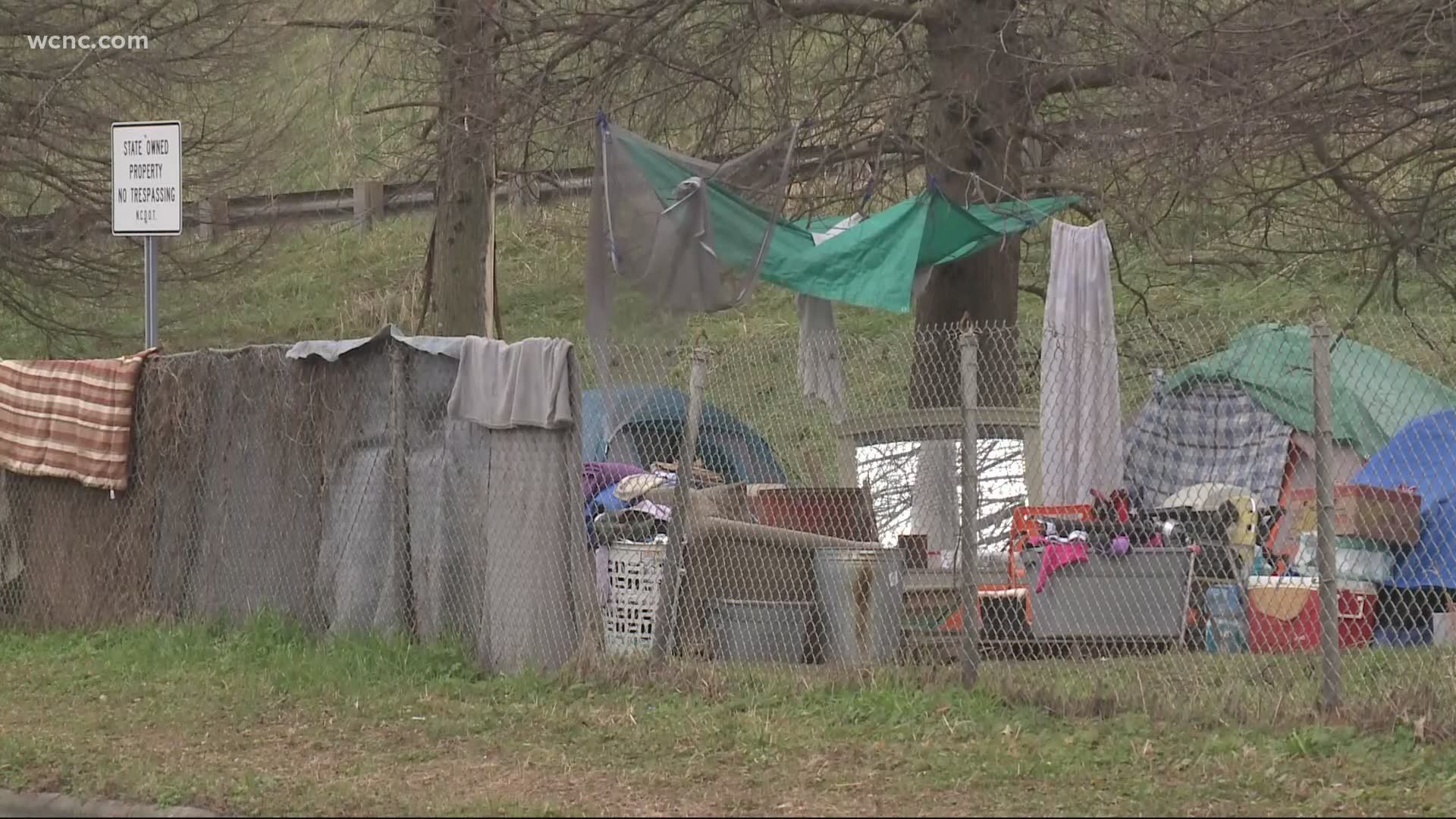 CHARLOTTE, N.C. — People living in Charlotte's Tent City, the homeless encampment right outside Uptown, were told to vacate the property by 5 p.m. Friday due to a rat infestation that Mecklenburg County leaders say is posing a public health threat.

A temporary housing offer was made, but after a few months, these people will again be on their own. The county offered residents of the encampment a free, 90-day stay in a hotel but there's still no long-term solution in place. The homeless camp right outside Uptown's thriving corporate buildings has been home to more than 150 people since the COVID-19 pandemic hit the region last year.

At least 210 people have accepted the county’s offer for a 90-day hotel stay, according to County Manager Dena Diorio. That number exceeds the number of people estimated to be living at the site. Diorio said they would not turn anyone away if they presented and said they had been living at the encampment.

At least 12 families came to Roof Above on Friday to ask for a room but were not living in Tent City. They were not given a room, but they were provided shelter through the Salvation Army.

The county does not know the exact number of people who were turned away on Friday.

"Oh my God, let's get up under some clean, warm blankets, and a warm environment, man it makes me want to cry," one man said at the encampment.

On Friday, volunteers with the University Soup Kitchen joined county workers in transporting residents to hotels. The process was frustrating, as county buses could only take a few people at a time, plus a number of people who don't actually live at Tent City were trying to get free hotels. The county is also seeing delays with the rides due to social distancing, with some people waiting as long as six hours for a ride.

Volunteers w/ University Soup Kitchen have been assisting the county with the process of transporting tent city residents to the motel. I'm told the process is a frustrating one as people who don't live in Tent City are claiming they do to get access to the free motels. @wcnc https://t.co/XUJ0dNBZar pic.twitter.com/T5RWeLcsD8

Joshua Bridges, who helps run University Soup Kitchen, said his group will be at Tent City at 5 p.m. Friday to encourage anyone left on the property to leave, even if they didn't plan on going anywhere.

"We don't know how our friends out here are going to react," Bridges said. "We don't know what kind of altercation's going to come. So we will be here this evening to make sure everything goes smoothly."

Tuesday, without any warning, Health Director Gibbie Harris issued a mandatory order requiring those who live in Tent City to leave by the end of the week so the areas can be cleaned and potential diseases won't spread. According to the CDC, rodents can spread 35 different diseases to humans through direct and indirect contact.

"To be perfectly honest, if I had my way, we would make a change in 24 hours. It is just not safe for people to be living in this environment," Harris said.

RELATED: Tent cities are popping up around Uptown Charlotte. Here's how you can help residents.

City of Charlotte and Mecklenburg County leaders have spent the past week pointing fingers over whose responsibility it is to help the homeless.

"Let me clear, that this is not a Mecklenburg County problem," Diorio said. "This is a community problem."

Diorio said on Friday that this move was not done to solve the homelessness problem in Mecklenburg County.

County officials said people who don't leave the area by 5 p.m. Friday could face a misdemeanor, but Charlotte-Mecklenburg Police and the Mecklenburg County Sheriff's Office both said they don't have anything to do with it. Neither agency plans to penalize anyone who doesn't get out by the deadline.

CMPD Chief Johnny Jennings issued a statement that said in part, “this is not how this should be managed” and he did not want to “criminalize homelessness.”

Meanwhile, Diorio called out City Manager Marcus Jones for backing out of an agreement to provide CATS buses to transport the homeless to the hotels.

"At a time when we have people living with rats, it is unfortunate that the city and the sheriff would refuse to help," Diorio said. "It is particularly troubling when one of the property owners is the City of Charlotte."

Rats multiply and they multiply rapidly, Harris says. It's a race against time to eradicate them before they spread to nearby areas. She advises folks who live in the surrounding areas to be on the lookout for rodents on their properties and to call pest control if they see them

Property owners are being given 72 hours to clean up the area -- and are expected to have everything cleared by 5 p.m. Monday. No one is allowed to return to the site during the clean-up process.

Harris called it "a race against time to eradicate" the rats before they spread into nearby areas. She cautioned those living near Tent City to be on the lookout for rodents on their properties and to call pest control if they see any.

"Rats multiply and they multiply rapidly. And that's our biggest concern," Harris said. "They're going to be moving to look for additional food. I would advise folks that live around the area just to be aware of their surroundings."

Harris said some property owners have told her they plan to put up fencing to prevent another tent city from popping up.

Diorio said although communication could have been better and there are lessons learned by the scrambling that was the past 72 hours of vacating the encampments, she is proud of her team and nonprofits for the work they've been able to do over the short period of time.

"We've relocated over 210 people into safe housing where they have access to food, three meals a day and snacks, wrap-around services, job supports, and mental health supports," she said.

RELATED: As deadline looms to relocate Tent City residents, leaders point fingers over who should help

How to help Tent City residents

Joel Segal, the executive director of the organization Housing and Dignity for All told WCNC Charlotte the homelessness problem in Charlotte has become even more noticeable since the pandemic started in 2020, and it’s the worst place to be right now.

Anyone who wants to donate can email joel.r.segal@gmail.com.

You can also donate to local nonprofits that help combat homelessness, such as the Salvation Army or Roof Above.

"This is what community looks like," WCNC Charlotte's Tanya Mednis tweeted alongside pictures of donations. "Donation drive underway to help the homeless in Charlotte. As deadline looms on Tent City move, dozens of people are pulling up, dropping off donations."

This is what community looks like. Donation drive underway to help the homeless in Charlotte. As deadline looms on Tent City move, dozens of people are pulling up, dropping off donations. pic.twitter.com/ZhgIVjRrZX

"Grassroots mission to help the homeless in Charlotte underway now," Mendis continued in a follow-up tweet showing the organization of those donated goods.

Grassroots mission to help the homeless in Charlotte underway now at @duppANDswat. @HealCharlotte1 @OhaviaPhillips and others organizing to make sure help gets to those who need it most pic.twitter.com/fd2JY3jvL2

A group of people gathered at the Mecklenburg County Government Center to protest the speedy abatement.

“I’m very sorry that it took a humanitarian issue like 12th street to get county and city leaders off their butts and moving about this,” said Charlotte resident Kyle Kirby.

Kirby said he isn’t with an organization, just a concerned citizen protesting what the county is doing to the people who live in encampments.

“No one wants them there with the rats, but 72 hours is a very, very high task for people with absolutely no means to move on,” Kirby said. “I would want somebody to come take a day off work and stand up for me.” 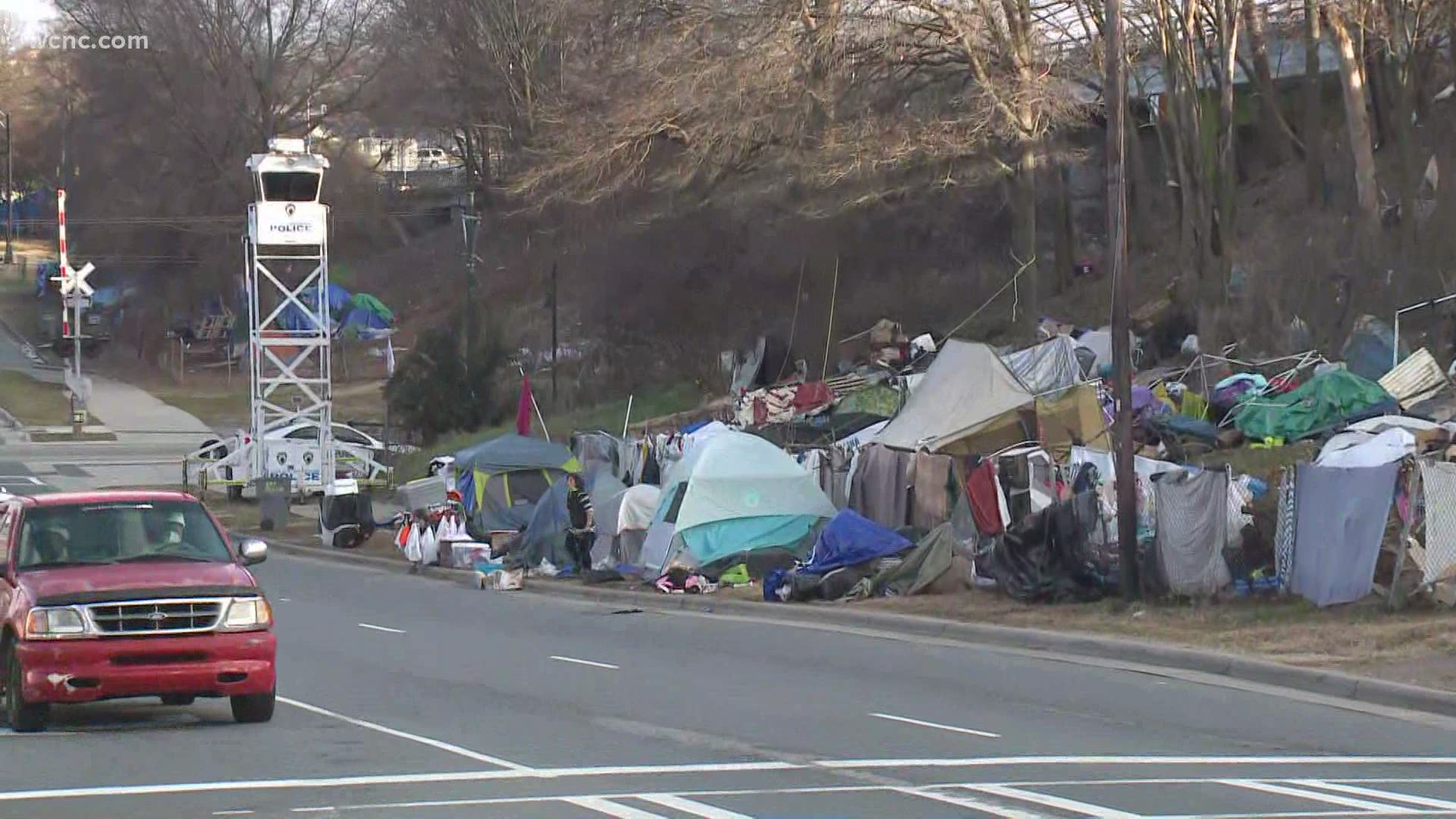 “Charlotte is suffering from a housing crisis and we need a permanent fix, we need homes, not hotels,” Kirby said.

“There’s nothing wrong with tanker cars or tiny houses or pods or whatever if it means a person gets to call it a permanent home and they feel safe, instead of just saying we’re just going to keep building more luxury apartments,” Brown said.

Instead of shuffling people around, Kirby said the city should look into why they’re out there in the first place.

“Whether it’s a mental illness, whether it's an addiction, whether it’s student loan debt, there’s a multitude of issues,” Kirby said.

Protester Jenny Gunn said if officials connected those people with resources to help, there wouldn’t be a need for a tent city.

“We need social workers and we need layers of support, and it is doable,” Gunn said.

Medis spoke with those helping the residents of Tent City hours before Friday's deadline.