CHARLOTTE, N.C. -- Car thieves in Charlotte are on the prowl. Shocking statistics show that auto thefts are on the rise to start 2017. 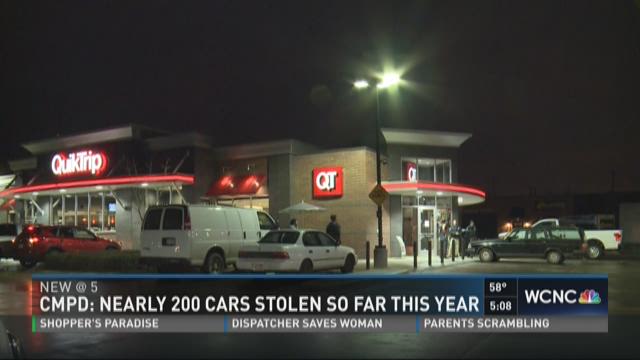 CHARLOTTE, N.C. -- Car thieves in Charlotte are on the prowl. Shocking statistics show that auto thefts are on the rise to start 2017.

Through Sunday, nearly 200 cars have been stolen in Charlotte alone. Officials fear these numbers will only get worse.

Justin Hedsbeth was speechless after hearing the news of a sudden surge in car thefts. In the last week alone, 43 cars have been stolen across the Charlotte area.

"In 20 something days," said Justin Hedsbeth. "I don't even know what to say about that."

Police say from Jan. 1-22, compared to last year, there's been a 60 percent spike in auto thefts.

"That's crazy man," said Daniel Hammond. "I got a mother and a sister and I got a wife. I don't want nobody to steal they car."

More than 50 of the boosted cars were taken with keys left in the ignition or just inside the car.

Police say most of these crimes have happened in private driveways and in public areas when cars are left unattended.

"She warmed up her car like many of us do in the driveway," said Julie Acuna. "She goes inside to get her child ready and goes back inside and the cars not there."

CMPD is teaming up with Quick Trip to shed light on this problem. Officers will be at select stores across the city tomorrow, checking for unlocked cars.

If you show an officer your keys, you'll be rewarded with a free coffee.