They said they are now "delivering millions of gallons per hour to the markets we serve." 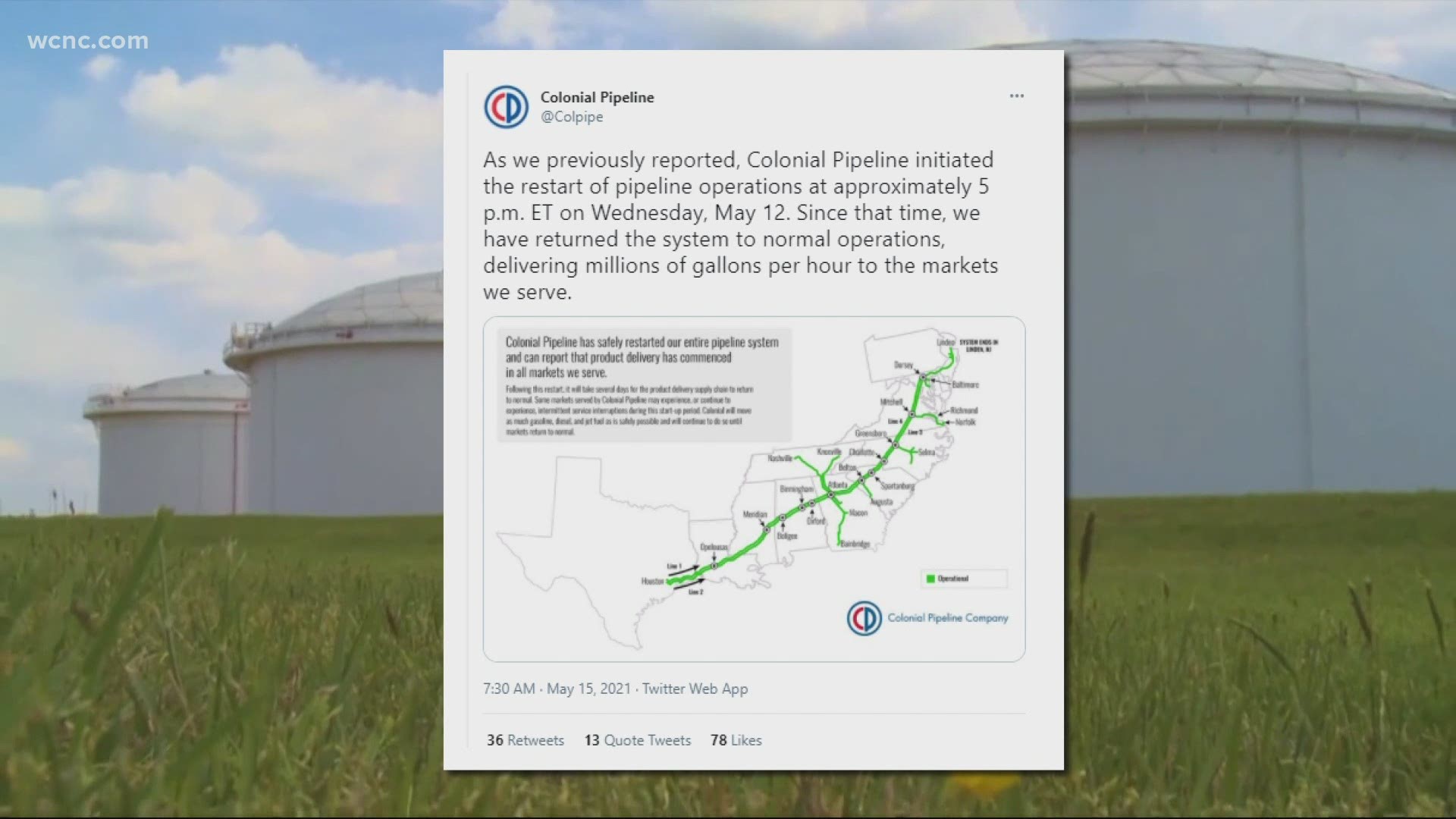 ATLANTA — One week after a cyberattack shut down the pipeline that is responsible for almost half of the entire East Coast's fuel supply, the Alpharetta-based company said they've returned to "normal operations."

Colonial Pipeline made the announcement on Saturday morning in a statement - just days after they said they initially restarted the flow of gasoline.

They said they are now "delivering millions of gallons per hour to the markets we serve."

"Since this incident began, we have been clear that our focus was on the safe and efficient restoration of service to our pipeline system. That is what we have achieved through the commitment and dedication of the many Colonial team members," the company said in a statement. "Our team members across the pipeline worked safely and tirelessly around the clock to get our lines up and running, and we are grateful for their dedicated service and professionalism during these extraordinary times."

As we previously reported, Colonial Pipeline initiated the restart of pipeline operations at approximately 5 p.m. ET on Wednesday, May 12. Since that time, we have returned the system to normal operations, delivering millions of gallons per hour to the markets we serve. pic.twitter.com/UJG7SqUxSQ

They said they recognize the "critical nature of our system" to millions of Americans.

According to the company, they deliver 100 million gallons of fuel per day and 36 billion gallons per year to markets they serve.

The outage sent motorists scrambling to the pumps to fill up - ultimately causing a fuel shortage across the state and along much of the route of the pipeline.

A statewide executive order signed previously by Gov. Brian Kemp to keep gasoline flowing into Georgia has been extended for another week.

The governor, on Friday, issued an executive order extension, which puts several provisions put in place, including the suspension of the state's fuel tax. It will remain in effect until 11:59 p.m. on May 22 - unless otherwise renewed.

According to GasBuddy, as of Saturday morning, 46 percent of the stations in Georgia are experiencing an outage.

Energy Secretary Jennifer Granholm says the nation is “over the hump” on gas shortages following a ransomware cyberattack that forced a shutdown of the nation’s largest gasoline pipeline.

Granholm says problems peaked Thursday night, and service should return to normal in most areas by the end of the weekend. She says about 200 stations are returning to service every hour, adding, "We should be back to normal fairly soon.″