On Sunday, a memorial was held in downtown York to honor Mike Doty, a detective who was shot in the line of duty early Tuesday morning. Doty died Wednesday from his injuries. 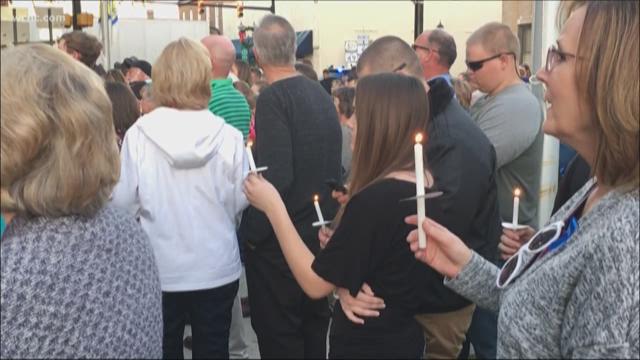 On Sunday, a memorial was held in downtown York to honor Mike Doty, a detective who was shot in the line of duty early Tuesday morning. Doty died Wednesday from his injuries.

Three other officers were shot in the line of duty during Tuesday morning's incident. Sgt. Randy Clinton and Sgt. Kyle Cummings are both recovering at home as of Sunday night. Officials say Sgt. Buddy Brown had another procedure Sunday and remains in the hospital.

Detective Doty began working at the sheriff’s office in 2006. He was an investigator with the York County Multi-Jurisdictional Drug Enforcement Unit and the Law Enforcement Officer Narcan (LEON) Program coordinator.

“He has done so much work in this community fighting the opioid crisis, and he would be proud,” said York County Sheriff Kevin Tolson.

People who knew Doty and many who didn't know him gathered at the memorial to honor his life.

Marie Burkhart, an explorer Doty trained through the Explorer Post 1786 program, told NBC Charlotte she came to the memorial to show appreciation for Doty's services to the community.

"I want everybody to realize what an asset he was," Burkhart said. "The [incident] has shown that there are good cops."

"Detective Doty was one of many good cops out there," she added.

"He loved his fellow officers," Robinson said. "He was just full of life, and the best thing we can do is go out and do our jobs to the best of our ability in his memory."

A funeral service will be held at the Calvary Church on Pineville-Matthews Road in south Charlotte at noon Monday.

Following the service, Doty will be interred at Forest Hills Cemetery in Rock Hill.