Emergency crews in Mint Hill are currently on the scene of a large house fire that broke out Wednesday morning. 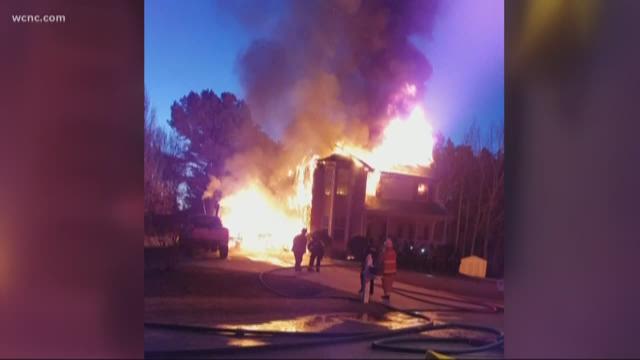 MINT HILL, N.C. – A Mint Hill woman was displaced after her home was engulfed in flames Wednesday morning.

According to Midland Fire & Rescue, firefighters responded to a reported house fire in the 7900 block of White Cliffs Drive a little after 6:30 a.m. When crews arrived on the scene, they observed a house engulfed in flames and smoke.

This is video from a neighbors phone. He says no one was inside the home at the time. Mother was out taking her children to school. pic.twitter.com/G0UM3T1rHz

Several additional fire departments were called to the scene, including Mint Hil Fire Department and the Idlewild Volunteer Fire Department. Officials at the scene told NBC Charlotte that the house is a total loss. The Red Cross is assisting the woman who was displaced by the fire.

BREAKING: Multiple crews on scene of a massive house fire in Mint Hill. No word just yet on the cause or if anyone was inside. Stick with WCNC as more info comes available. pic.twitter.com/AU1FmbRcUo