Here in this flag-draped, field of dreams are the dreams spread across 22 acres, that slipped away. 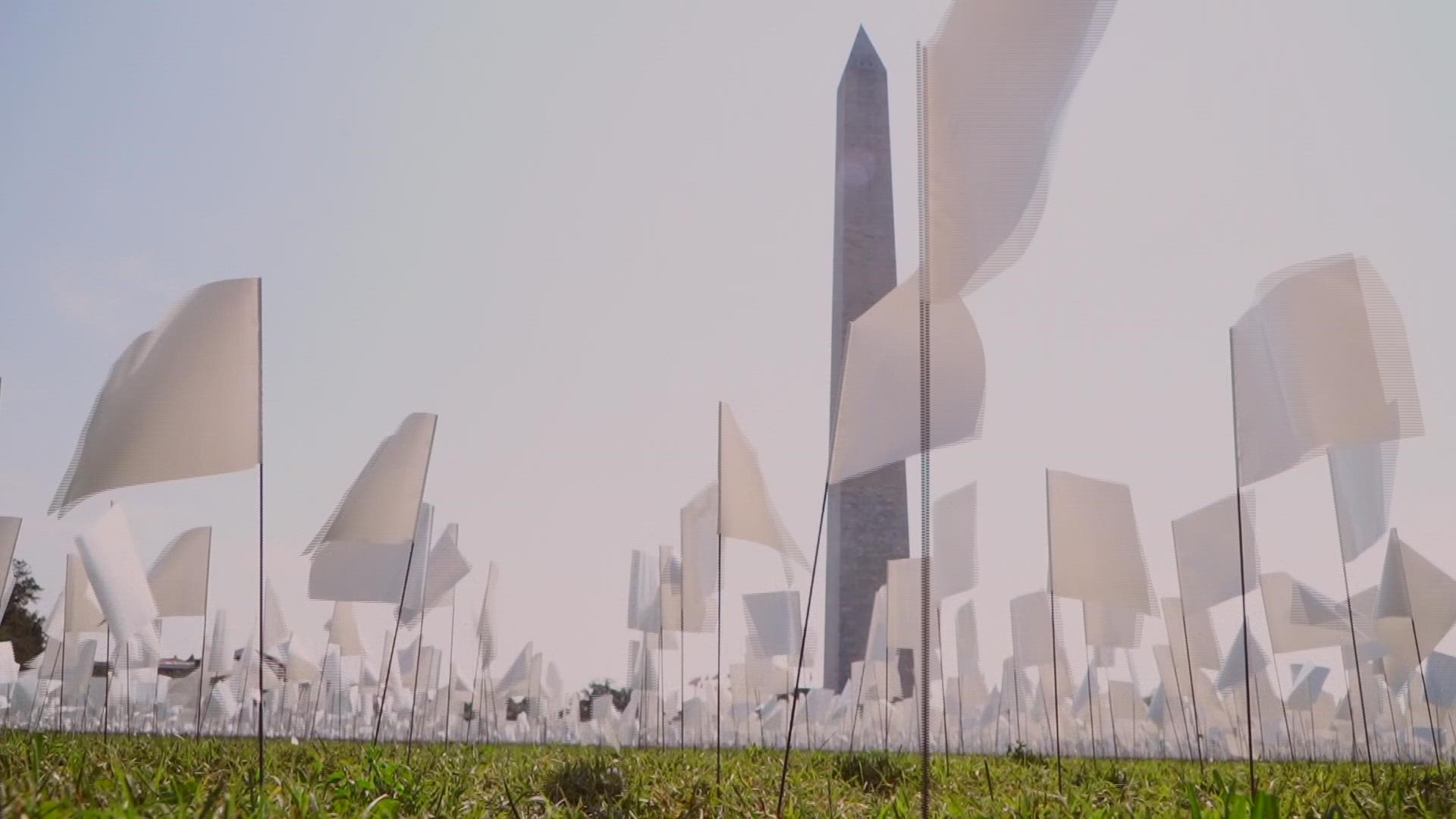 WASHINGTON — In our nation’s capital and across America you can pause to absorb our many memorials to wars around the world. Men and women lost to conflicts they didn’t start.

But with so many people dying each day in this war on COVID, how do you remember the ones who didn’t sign up to fight?

As we found out during a recent trip to the National Mall, you raise a flag.

There are hundreds of thousands of them along Constitution Avenue, flanked between 15th and 17th streets. The sight lead us to sit in a contemplative space of reverence as we absorbed in the sight of this national mourning space.

Step by step, we wondered.

How do you measure the enormity of a loss?

Here in this flag-draped, field of dreams are the dreams spread across 22 acres, that slipped away.

Visits that would never be.

Lives that didn’t have to end.

“This art is a mirror back to America saying this is who we are. Is this really who we want to be? That’s hard. It hurts,” said Suzanne Firstenberg.

Her In America: Remember tribute is a living installation. A memorial that seeks to capture the soul of the loss to COVID in this country and its devastating toll more than 680,000 times over and growing.

660,000 white flags on National Mall in honor of those who have died of COVID-19

“Every person’s presence honors every other person’s grief. So many people have grieved in isolation. And then, who listens to them?”

If you listen closely, there is a commentary on HOW we got here – on inequity and health disparities.

And, a declarative statement formed at the base of the Washington Monument and in the shadow of the National Museum of African American History and Culture.

“The fact that the lives of the elderly and lives of color are disproportionately affected by this, really drove me to create this art in the first place,” said Firstenberg. “We have to know that every life matters.”

As we walked through these green pastures, we had to ask Firstenberg whether the enormity and scale of the art she created – the lives lost – had hit her yet.

It’s too early to know. The rest of us are grappling with it too.

And, the Trust for the National Mall, thought America’s front yard should be open to gather, to ponder, and reflect.

Catherine Townsend is the President and CEO of the Trust for the National Mall. She believes there ought to be space for all kinds of social commentary and artistry on the land that bridges divide.

“It just has power. It has a real powerful opportunity,” Townsend said. “There’s so many people that have just happened upon it. They’re just walking up and saying what is this? That’s the beauty of this.”

In the days and weeks after In America: Remember found a space of reflection here on the National Mall, Suzanne says she’s been struck by the stories - and the humanity.

There was the ER doctor who wrote out 63 flags for patients he lost.

The mother who has tried desperately to get one of her children to get vaccinated, without any luck.

And, people like Cassandra Taylor and her daughter, Cheronda who came to honor the man they say was “large and in charge.”

Retired MSgt. Kevin Taylor died back in August of last year. For more than 20 years, he served his country in the Air Force. He’d go on to serve others in Delaware where he worked for the state.

He loved his family. And, he loved the professional football team that plays here in Washington. He grew up here in DC and carried on his family legacy of military service through the generations.

But he was also a servant leader in his church. And, his family believes he contracted COVID while leading the worship one Sunday.

“That’s a hard pill to swallow and process and then hear people joining and making fun and saying oh, it’s a hoax, only 1% is dying - well if it was your loved one that would matter,” said Charonda. “My Dad contributed greatly to this country.”

In section 00, there is a flag that bears Kevin’s name. On it, Kevin’s wife chose a word to best describe her love of more than 40 years.

“I said he was a victor because that’s what he was.”

Credit: Taylor Family
Charonda singing at her father’s flag as a tribute. She comes from a singing and serving family.

There are so many stories here in the rows of white flags as they flap in the wind. And, in spite of all the loss here, Firstenberg sees hope.

“I hope it changes people, if not as a nation as a whole, individually, one at a time to say we have to change something.”

Or else, we’ll be left to ponder how we raised a white flag and surrendered.

The In America: Remember tribute changes each day – because the people who visit add to the art that Firstenberg created.

There are flags that represent people from every part of our nation.

Each flag is geo-captured and so it can be seen by loved ones who can’t make it here to the mall. You can fill out a form to have your loved one memorialized here and view it on the artist’s website.

In America: Remember will remain on the Mall until October 3.

RELATED: Loved ones personalize 660,000 white flags planted on National Mall in honor of those who have died of COVID-19

Harmful hashtags are appearing on social media which could be in your child’s hands right now. We spoke with teens and experts about how they handle negativity.