Monday night officials said aerial firefighting operations would be continued through the night. The cause of the fire remains under investigation. 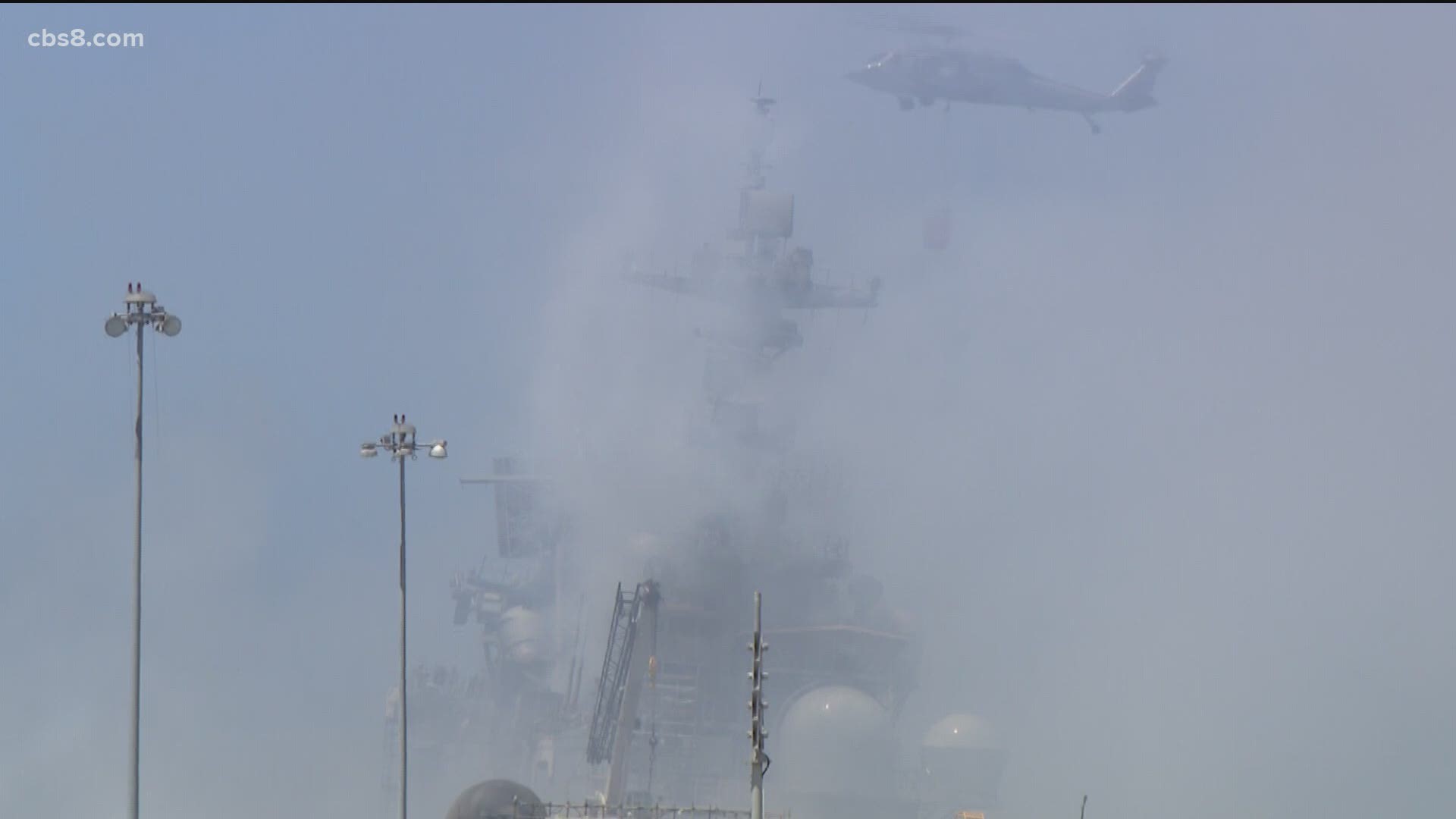 SAN DIEGO — Firefighters spent a second day battling a fire Monday aboard the USS Bonhomme Richard at Naval Base San Diego, laboring to contain a super-hot, explosive blaze that injured scores of sailors and civilians Sunday and caused extensive damage to the warship.

Navy officials held a news conference Monday morning to give an update on firefighting efforts aboard this ship.

Monday afternoon the Navy issued the following statement indicating that all its personnel had been released from the hospital.

"59 personnel, 36 U.S. Navy Sailors and 23 civilians, have been treated for minor injuries including heat exhaustion and smoke inhalation. Currently, there are no personnel hospitalized."

Monday night officials from Naval Surface Force U.S. Pacific Fleet shared an update saying that significant progress had been made with the help of aerial firefighting operations which would continue through the night.

Naval forces are "doing everything they can" to save the ship, which has sustained considerable superstructure damage since the conflagration erupted on the vessel's lower decks, Rear Adm. Philip Sobeck said.

Sobeck said the cause of the fire aboard the ship is still unknown, but that crew reports indicate it started in lower decks. Because the vessel was undergoing maintenance work when the fire broke out, its built-in flame-suppression system was inoperative, he told reporters.

Adding to the dangers posed by the inferno, the flames were burning several decks away from a section in the ship where a million gallons of oil is housed, Sobeck acknowledged, though he expressed confidence that firefighters could keep the blaze away from that storage area.

Navy veteran Brandon Jesina watched the burning ship from the nearby bridge. He served four years onboard the USS Bonhomme Richard and now works as a contractor on Navy ships.

"When you see the ship engulfed in flames all the way from the bottom all the way to the top of the mast, it's a rough sight to see," he said.

Jesina believes the firefight is especially challenging because of all the lagging or insulation on board.

"Of course we all want to see the ship sail again, but by the looks of it...it’s pretty damaged," he added.

Officials in National City asked residents to remain in their homes as much as possible to avoid health hazards from the smoke billowing off the burning ship. Likewise, the San Diego County Air Pollution Control District Office noted that if residents can smell acrid smoke, they should limit physical activity and stay indoors if possible.

"Right now, we're not seeing anything rise to a level of health concerns for the public," county Public Health Officer Dr. Wilma Wooten said. "However, where smoke is present, San Diegans should limit physical activity and stay indoors, if possible, to limit exposure to particulate matter. The situation could change, as the fire is expected to be burning for a few days."

The National Weather Service reported that the area of smoke concentrations would shift throughout the day as the onshore winds kick in and that the smoke should lift as the temperatures rise.

A Family Care Line has been set up for families looking for information regarding their sailor. The number is 844-523-2025.

The fire began shortly before 9 a.m. Sunday, according to the Navy and the San Diego Fire-Rescue Department. After about 90 minutes, authorities decided to remove all firefighters from the vessel for safety reasons and battle the blaze by remote means, including water-dropping helicopters.

About two hours after the fire began, a blast shook the vessel.

"None of the (SDFRD) firefighters were on board the ship when the explosion happened, but the blast threw several firefighters off their feet," the city department reported.

A total of 57 crew members battling the blaze have suffered various injuries, mostly heat exhaustion and smoke inhalation, according to Navy officials. Five have been hospitalized in stable condition.

There were 160 sailors and officers aboard the ship when the fire broke out, Navy spokesman Brian O'Rourke said.

About four hours after the ship began burning, the Navy moved the USS Fitzgerald and USS Russell to berths farther away from the fire, according to Mike Raney, deputy public affairs officer with the Naval Surface Force.

"We are grateful for the quick and immediate response of local, base and shipboard firefighters aboard (the ship)," Chief of Naval Operations Adm. Michael Gilday said Sunday in a prepared statement, describing the event as "a terrible tragedy."

Despite the severity of the fire, Sobeck told news crews he was "absolutely hopeful" that the personnel were doing everything possible to make sure the Bonhomme Richard can sail again.

San Diego Mayor Kevin Faulconer pledged that city officials are "here for the sailors and civilians affected by the ship fire at Naval Base San Diego."

"All of the crew is off the USS Bonhomme Richard and accounted for," Faulconer noted. "Thank you to our brave sailors and rescue crews."

The Bonhomme Richard is the third warship in U.S. naval history to bear the name, which means "Good Man Richard" in French and honors Benjamin Franklin's Poor Richard's Almanac.

The vessel has been homeported at Naval Base San Diego since the spring of 2018, when it returned from a six-year port switch to Sasebo, Japan, while becoming the command ship for Navy Expeditionary Strike Group Seven.

RELATED: 21 hospitalized with injuries from fire, explosion on USS Bonhomme Richard at Naval Base San Diego

PHOTOS: Fire crews responded to a fire and explosion onboard a Navy ship at Naval Base San Diego on Sunday, July 12, 2020