Democrats say it's needed to keep elections fair, but the GOP says it's a power grab. 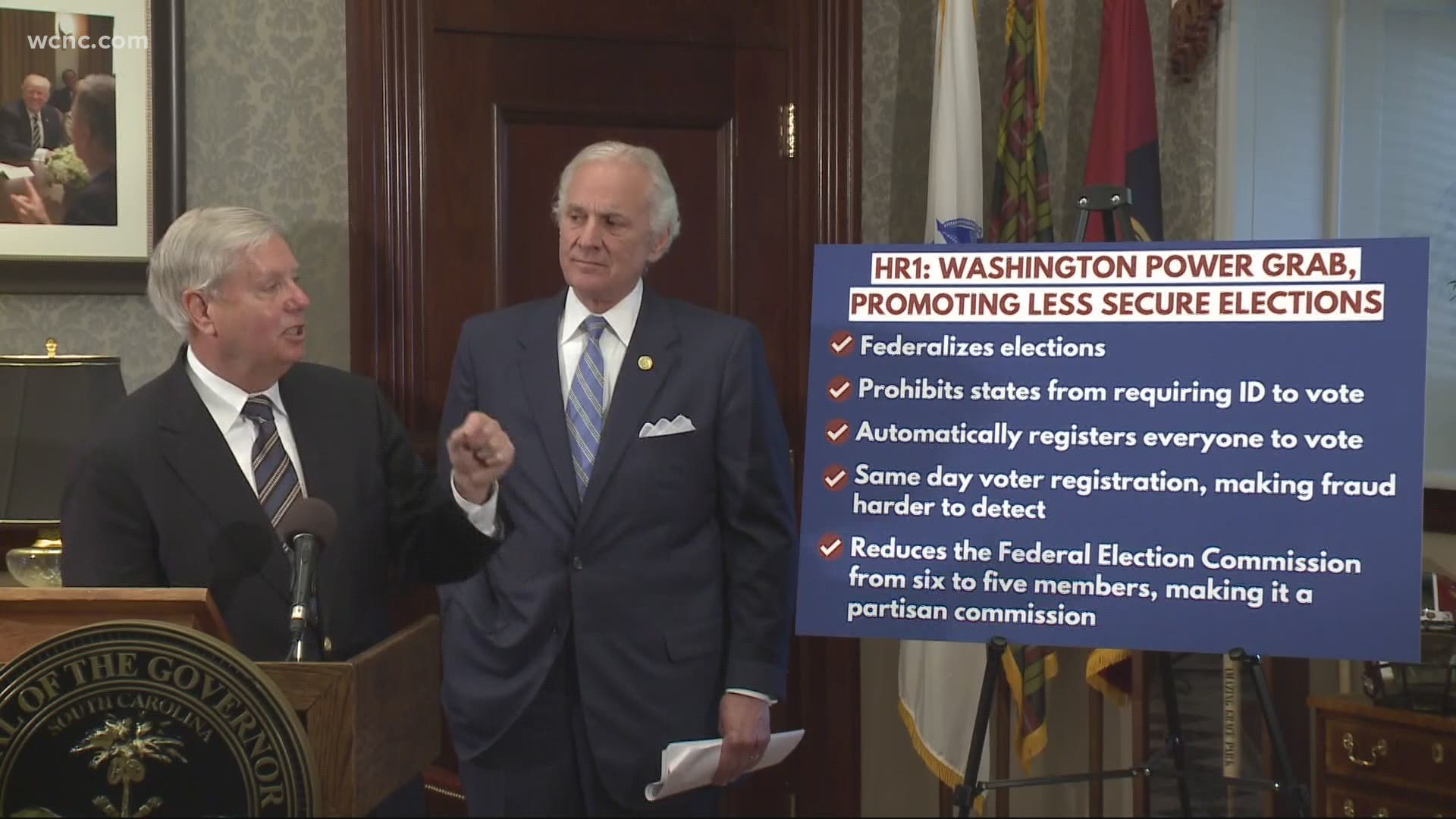 The two lawmakers held a joint news conference Tuesday where they basked the bill, calling it a "power grab."

"[It] is an attempt by the radical left to take over every election system in the country," Graham said. "The contents of this bill should scare everybody in South Carolina."

The For the People Act, as it's known, has already passed the U.S. House along strictly partisan lines, with no Republicans voting for it. It now faces an uncertain future in the Senate, since that body is split 50-50, and it might take throwing out the filibuster rule to pass it. West Virginia Democratic Senator Joe Manchin has so far been opposed to going that route.

Democrats say the bill is necessary to expand voter access and crack down on money in politics. Many of the ideas have been discussed by Democrats for years, and key provisions have been introduced before, such as trying to limit drawing of Congressional districts that favor one party or limiting what's sometimes known as "dark money," or funding from political action committees that's hard to trace and is essentially unlimited.

However, the bill does not reauthorize the Voting Rights Act, an action many Democrats have been calling for since a Supreme Court ruling seven years ago took out key provisions. The effort to reauthorize that bill is still underway, but it's separate from this proposed law.

Republicans, however, counter that the law is a "power grab" designed to give an advantage to Democrats. They object to the lessening of voter identification requirements, expansion of early voting, and automatic voter registration for federal races. Republicans say this would weaken election security and allow people who are ineligible to vote to cast a ballot.

"They will eliminate a requirement, any kind of ID requirement, other than saying that you are who you say you are, and you can register to vote on the same day as the election." McMaster said. "It requires the states to have early voting.”

"[The law] will destroy ballot integrity," Graham added. "This will institutionalize techniques used by the left to expand the vote in a fashion where there will be no integrity in the vote

Trav Robertson, the chair of the South Carolina Democratic Party, pushed back on both Graham and McMaster in a statement, saying the bill fights against voter suppression.

"At the end of the day the only people attempting a power grab at the ballot box are Lindsey Graham and Henry McMaster." Robertson said.  "They are scared to death that Democrats in this state increased their share of the general election electorate and that the mood in this state is changing where people want Democratic policies like the American Rescue Act and the newly announced infrastructure bill, because these bills are making people's lives better."

As the federal battle wages on, there's also a fight in many state legislatures over voting rights, with Republicans in dozens of states creating bill they saw are designed to fight voter fraud, but that Democrats say will suppress voting, particularly of minorities. The measure that's gotten the most headlines is the one passed in Georgia recently that's led to boycotts and then boycotts of the organizations doing the boycotting.