"I Can Do Anything": Burlington Heart Transplant Is Home!

ALj and his mom rode home in style; leaving Children's Hospital in Chapel Hill in a limo provided by a Burlington police officer. 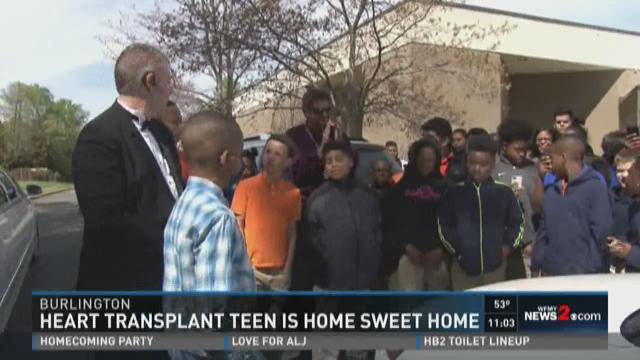 BURLINGTON, NC - When Albert Jeffries, IV received a new heart, he captured the heart of the world. After 127 days in the hospital and a successful transplant, the Burlington teenager, known as ALj is home.

ALj and his mom went home in style; leaving Children's Hospital in Chapel Hill in a limo provided by a Burlington police officer.

Officer Jack Boyles, III owns Allure Limousine. He offered ALj's mom the limo for free, after hearing her plea from another officer.

The Burlington Police Department gave their full support.; even giving Boyles the day off to drive the ALj and his mom home.

"It's turned into an absolute blessing and a second chance for this young man and I'm so honored and proud to be a part of that," said Boyles.

On March 10th, the 13-year-old underwent heart surgery, after waiting his entire life for the transplant. Diagnosed with dilated cardiomyopathy at 4-months-old, ALj was in and out of the heart for years.

In December of 2015, he was checked into the hospital once again, but his condition worsened during his stay. By the "grace of God," his mother said, the teenager was surprised with a new heart after 99 days in the hospital.

The video of ALj and him mom, Tina Turner, receiving the life-saving news, went viral, and was covered by several national media outlets.

Now, Tina said life is becoming easier for her son.

"I'm not going to have to worry about him getting short of breath anymore or him having chest pains anymore. It's all going to be alright," said Tina.

The day before his release, ALj underwent a biopsy for a last check of the heart. The results showed his body accepted the heart 100 percent.

"The heart is perfect. It's a perfect fit," Tina said.

Like a celebrity- ALj rode off in style and stopped by Broadview Middle School- to see his friends for the first time in months.

But, he was most excited to sit with his family and eat cupcakes and think about all the normal things he can now do.

"I'm looking forward to running and getting to ride my bike, " said ALj. "I feel like I can do anything right now."

Physical therapy will continue for ALj and he will have more doctor visits in the coming weeks and years to ensure his heart continues to beat strong.

The teenager hopes to go back to school in May. Tina plans to throw ALj an official homecoming party in Burlington on April 23rd.