Austin Water issued a city-wide boil notice on Feb. 17. It's been partially lifted. 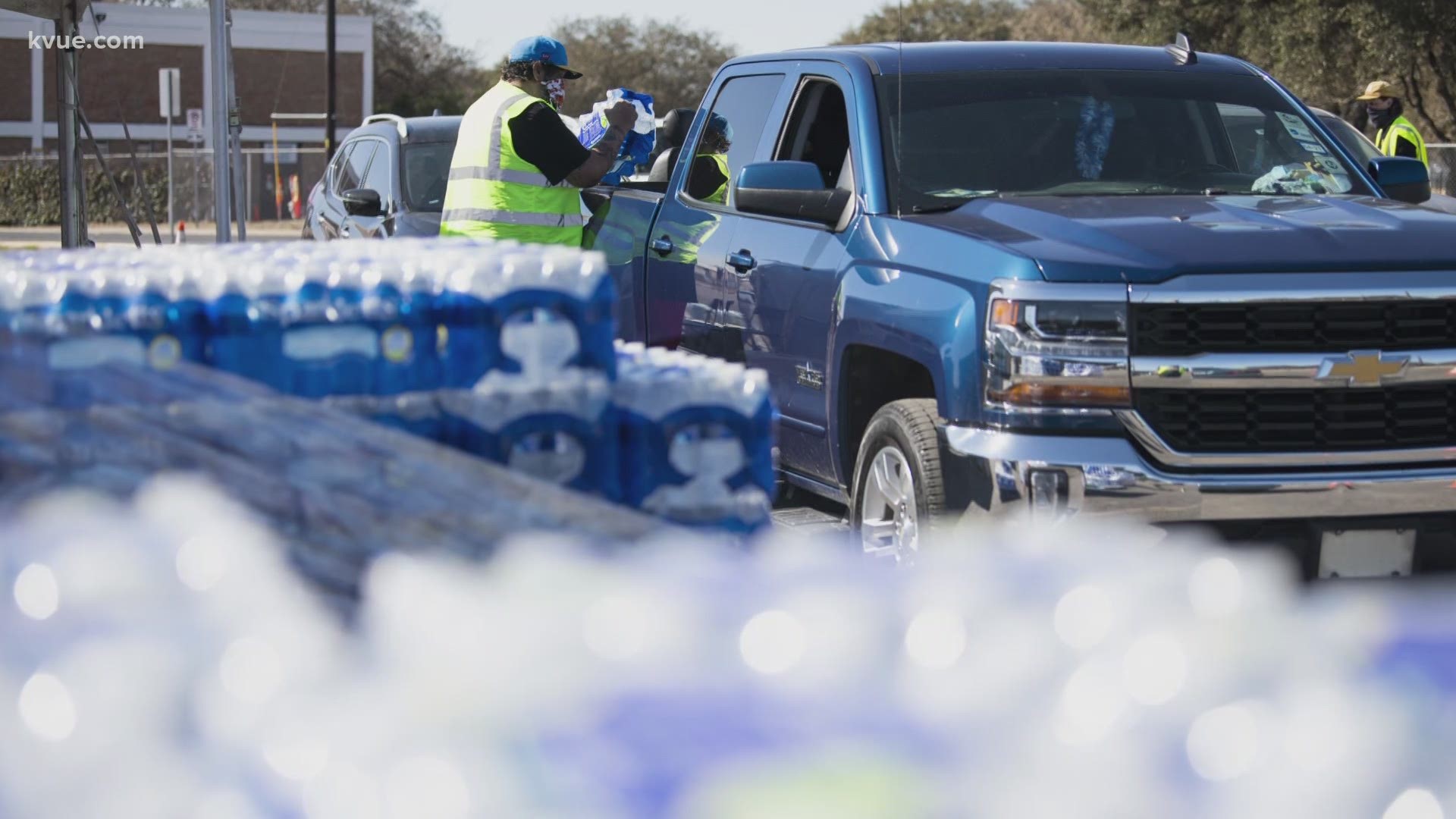 AUSTIN, Texas — Amid statewide power outages, some local water utilities are having issues with service.

Here's a list of alerts that have been reported to the KVUE newsroom.

Austin Water said it restored water service to three major hospitals on Thursday and was working with state officials to expedite the testing and approval process so that hospitals can safely use the water without the need to boil it. Austin Water has also restored water pressure in "major pipelines that are the backbone of our water distribution system," which will enable the agency to start restoring service to customers in additional areas.

A boil water notice has been issued by Hornsby Bend Utility Company for the Austins Colony water system, Public Water System ID No. 2270255, located in Travis County. It affects about 3,327 customers.

On Feb. 24, Aqua Water said the boil notice for the entire Aqua WSC system has been lifted.

The boil water notice for the Brushy Creek Municipal Utility District (MUD) has been lifted as of Saturday, Feb. 20.

Due to prolonged power outages, the Brushy Creek MUD water distribution pressures fell below 20 psi for a couple of hours on Feb. 17. The Texas Commission on Environmental Quality had required the District to notify all customers to boil their water prior to consumption.

The boil water notice for areas east of Onion Creek in the City of Buda is now lifted. The City received the results from our water samples and all is good. Tap water is now safe for consumption after the city confirmed positive results from water sample tests.

As of Feb. 23, Manville Water Supply corporation has lifted its boil water notice.

Due to freezing temps & outages, CLSUD is unable to keep up with demand.

The City of Dripping Springs lifted its boil water notice on Saturday, Feb. 20.

The City of Georgetown has lifted boil water notices for all Georgetown water customers.

People in areas no longer under the boil water notice may still see sediment or discoloration in their water because of the loss of pressure in the water system, the City said. To remove sedimentation or discoloration, follow these steps:

Previously: Monarch Utilities announced a boil water notice for customers in the Plum Creek, Huntington Estates, Iverness Point, and River Oaks Ranch water systems. The SouthWest Water Company said on Feb. 20 that some systems have no water either because the wholesale provider can't provide water to the company at this time or crucial equipment needed to supply and treat water is frozen.

“Due to repeated power outages, the system is unable to keep up with demand,” a press release from the utility company said.

Due to wholesale provider the City of Austin issuing a boil water notice, Mid-Tex Utilities customers will also be required to boil water prior to consumption. Bacteriological samples will be collected as soon as conditions improve, and the utility would cancel the Boil Water Notice at that time. This notice affects all 508 customers of Mid-Tex Utilities.

The Village of San Leanna issued a boil water notice Wednesday night for all customers in the village. All residents are being asked to cease non-essential water use, including faucet dripping, until tank levels can be replenished.

The City of Hutto ended its boil water notice on Tuesday afternoon.

City of #Hutto water is safe to consume again so our boil water notice has ended. Our system is fully functioning and water has passed TCEQ requirements for use.

Thank you for your patience! pic.twitter.com/wNjblndJxZ

Jonestown Mayor Paul Johnson posted on Facebook on Feb. 16 that the Jonestown Water Supply Company issued a boil water notice for its customers.

After the boil water notice was issued on Feb. 17, Kyle officials announced the advisory would be lifted as of Feb. 22.

City leaders also confirmed water customers will not see a rate increase in water rates as a result of the winter storm, as these rates are set by City ordinance in coordination with the City budget process.

As of 12:30 p.m. on Feb. 23, the boil water notice for all Leander water customers was canceled, the City said.

As of 3:45 p.m. Feb. 23, the boil water notice for Lee County Water Supply Corporation customers has been rescinded.

As of Feb. 23, the boil water notice first enacted on Feb. 17 has now been lifted.

Residents of Carriage Hills, Bell Farms, Stonewater and Briar Creek are now under a boil water notice. Manville Water has recharged their systems and until water samples are tested in the lab, water should be boiled before consumption or use.

As of Feb. 24, a boil water notice has been lifted for all areas of Pflugerville shown in green on the City's map located here.

The boil notice for Pflugerville was issued on Feb. 15.

Additionally, SouthWest Water Company had previously issued a boil water notice for its customers in the Windemere Community water system. The company said due to repeated power outages, the system is unable to keep up with demand. Crews are on site and will be providing service as conditions permit. Bacteriological samples will be collected as soon as conditions improve and the boil water notice will be canceled at that time.

Effective Sunday, Feb. 21, the City of San Marcos has lifted the boil water advisory for all City water customers as testing has confirmed the water is safe to drink.

The City of Taylor announced a boil water notice on Feb. 15, and residents throughout the City were experiencing low or no water pressure until power was restored. On Feb. 16, crews were alerted that a generator was on its way to the water treatment facility to restore power.

On Friday, Feb. 26, the City said residents no longer need to boil their water prior to use based on test results provided to the Texas Commission on Environmental Quality.

Due to the cold temperatures and power outages to critical infrastructure, Travis County officials are warning customers in the WCID No. 17 service area, with the exception of Steiner Ranch, could be experience water reduction or complete loss of service until restored. A boil water notice was also issued for customers in the same area.

Due to reduced distribution system pressure due to power outages, the TCEQ has required the Wimberley Water Supply Corporation (WSC) public water system to notify all customers to boil their water prior to consumption.

To ensure the destruction of all harmful bacteria and other microbes, water for drinking, cooking, and ice making should be boiled and cooled prior to use for drinking water or human consumption purposes. The water should be brought to a vigorous rolling boil and then boiled for two minutes.

When it is no longer necessary to boil the water, the public water system officials will notify customers that the water is safe for drinking water or human consumption purposes. Once the boil water notice is no longer in effect, the public water system will issue a notice to customers that rescinds the boil water notice in a manner similar to this notice.

The Wimberley WSC said on Saturday that the LCRA had opened its lab to receive water samples from public water systems with a 24-hour turnaround time. Wimberley WSC said field personnel was collecting samples Saturday morning that were expected to be delivered to the LCRA by noon Saturday. If Wimberley WSC receives negative results from the LCRA, "the boil water notice could be lifted as soon as Sunday afternoon."

If you have questions concerning this matter, you may contact Garrett Allen at our office phone number 512-847-2323.

Texas power outages: How the largest energy-producing state in the US failed in freezing temperatures