The property owner, WB Moore Company, gave prior notice the area needs to be cleared out because it’s interfering with business operations. 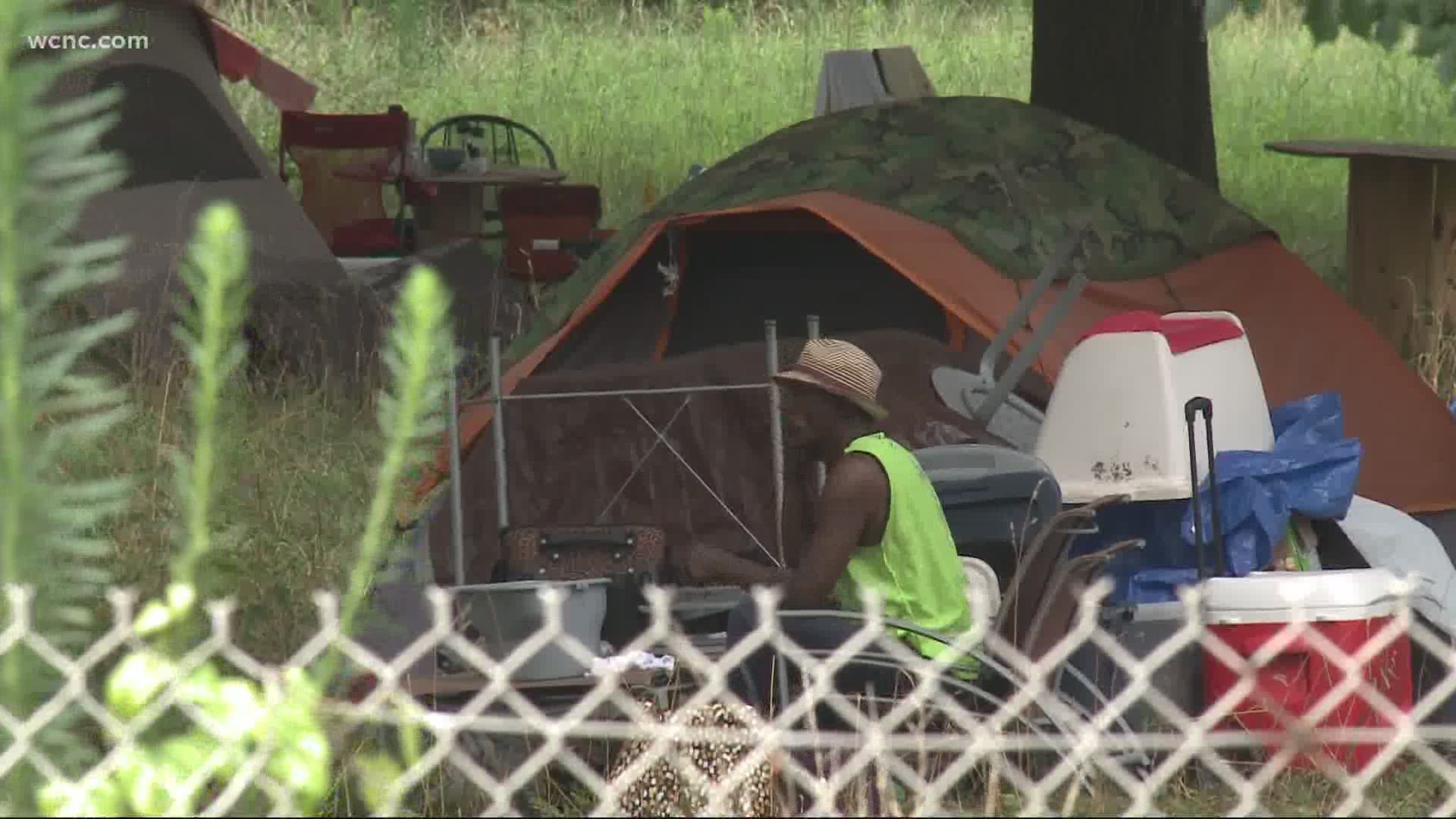 CHARLOTTE, N.C. — People living in Charlotte’s tent city were forced to move out by 5 p.m. on Friday.

The homeless camp is located near West 12th Street and Poplar. The property owner, WB Moore Company, gave prior notice the area needs to be cleared out because it’s interfering with business operations. The Charlotte Mecklenburg Police Department said they would remove people who are trespassing if needed.

Members of non-profit groups say nearly all of the people moved out earlier in the week, but WCNC Charlotte talked to others who say they’re willing to be arrested.

Charlotte's Mayor Vi Lyles spoke out about the issue in an open letter saying in part, "cities across America continue to struggle with homelessness
and many have reported increased size and visibility of encampments. Charlotte is no different."

Charlotte is not alone in its struggle to combat and control homelessness. This is an issue in every major city in the U.S. and it is getting worse with each day of this pandemic.
I am committed to finding solutions for everyone living in homeless encampments and tent cities. 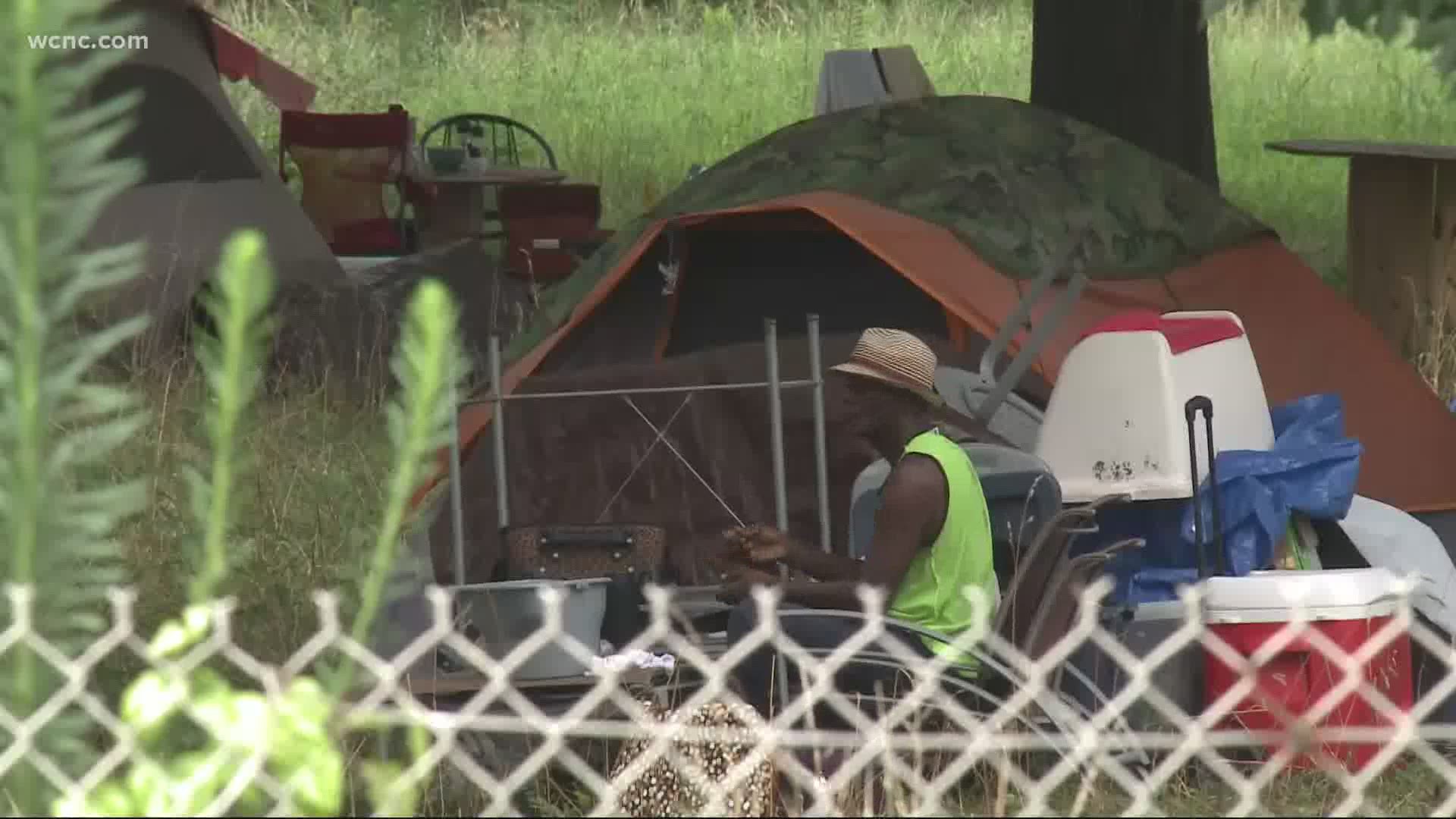 On Friday, there were still some tents that remained, but not many people.

“They’re just empty, and people are just trying to get their last little stuff out,” said Bruce Vaughn.

Vaughn lived in the tent city with his fiancé, and he said he only returned to support another man who is refusing to leave.

“My plan is to stand by him, not abandon him,” said Vaughn.

The property owner, WB Moore Company, gave prior notice that people would have to clear out by 5 p.m. on Friday.  Meantime, several non-profit groups have been helping people move; many of whom left earlier in the week.

“We were able to help them evacuate and go across the street,” said Jessica Gibson, who is assisting people who are moving.

However, across the street is state-owned land, which advocates hope doesn’t cause new problems.

“We’re hoping that the governor, because it’s on state property, will adhere to CDC guidelines and leave them alone,” said Jessica Lefkowitz, founder of Hearts for the Invisible Coalition.

CDC guidelines discourage clearing out encampments in the pandemic because when people disperse it increases the potential for the disease to spread.  WB Moore says they are sensitive to the situation, but also have a business to run, and there’s a demolition job scheduled for Monday.  CMPD says they will remove people from the property who are trespassing if needed.

“The CMPD has a duty and an obligation to respond and assist the property owners,” said Captain Brad Kock with CMPD.

Vaughn is aware of what could happen to him if he sticks around.

“Peacefully, humbly be walked away in handcuffs with him if need be,” said Vaughn.

The non-profit, the Roof Above, said they’re aware of 25 to 30 people living in the tent city.  The organization said six people have agreed to move to the shelter, but the rest have not.  Some expressed concern about being in the shelter during the pandemic.

The last person in this specific tent city off W. 12th and North Poplar is getting help moving off the property. No arrests. Everyone else has moved. @wcnc pic.twitter.com/TXEL2mI2vm