After violent incidents and crimes happened at Concord Mills Mall in 2017, a petition was created calling for a curfew. The petition is now garnering new attention. 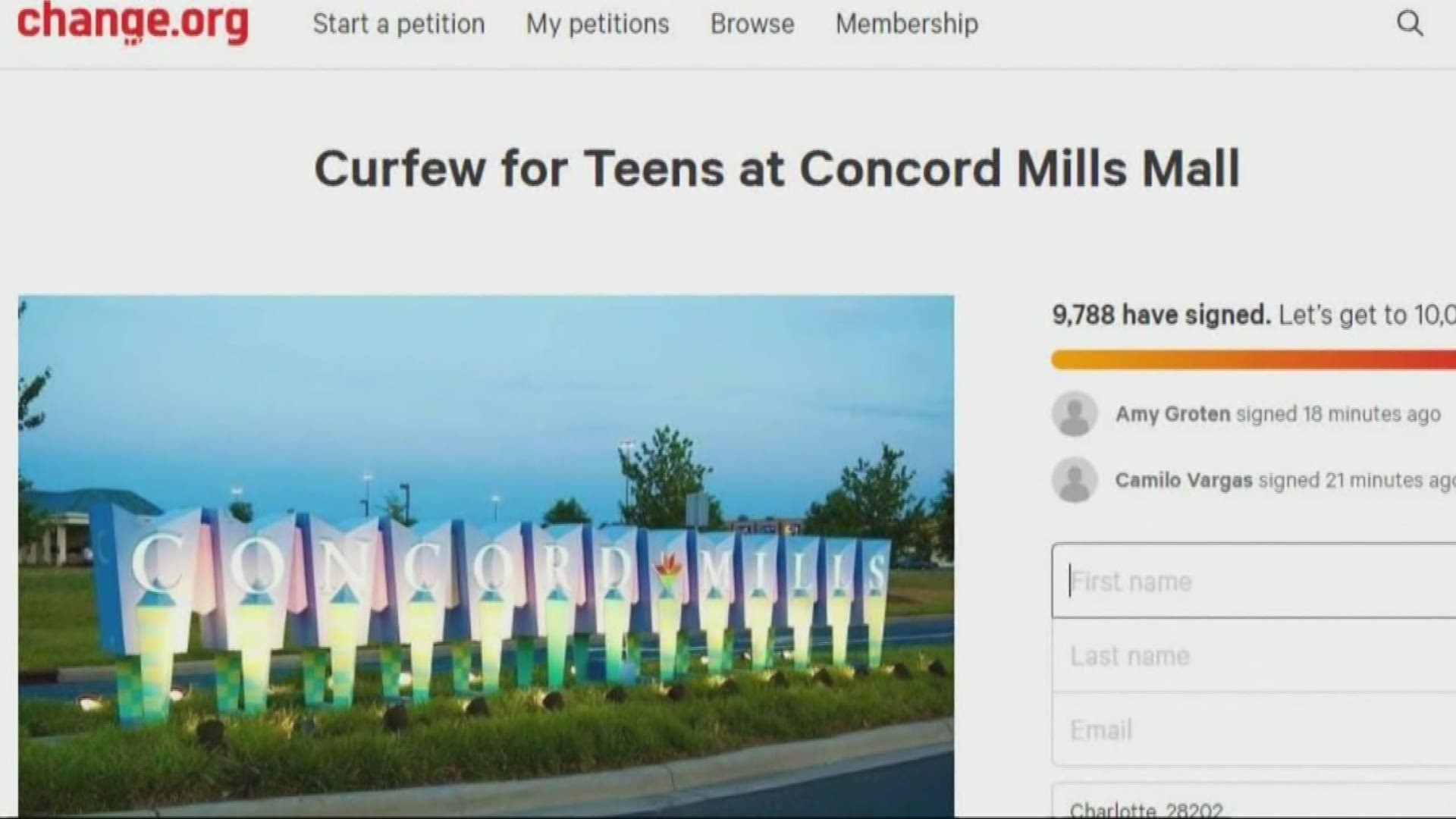 CONCORD, N.C. — Police said 13-year-old Aveanna Propst was hit by a stray bullet and killed outside Concord Mills Mall on Saturday. Now, an old petition calling for a curfew to be established at the popular shopping center is gaining renewed attention.

RELATED: Teen charged with murder in shooting of 13-year-old at Concord Mills

"It's shocking, honestly," said Edward Griffin, who uses the mall to go to the movies. "It's unbelievable."

Propst's death is still gripping the community. A teen who was not the intended target, according to police, was gunned down just before the new year.

Concord Police said Dontae Milton Black, 18, was arrested for Propst's murder on Wednesday. They said he also shot two other innocent minors, who survived, as he tried to take aim at a 16-year-old.

Police said Black got into an altercation with the 16-year-old inside the mall moments earlier.

"It was devastating," said Kristen Twumasi, a mother who frequents the mall.

It's unclear if Propst and the other teens were there alone, but the heart-breaking murder renewed support for a petition that was originally created in 2017.

The petition calls on Concord Mills Mall to enact a curfew for minors after several violent incidents in recent years.

"When I was a teenager, I had to be home before the street lights were on," Twumasi said.

It's unclear if a curfew would have prevented the shooting or the tragic murder, but other area malls have put those restrictions in place. It's an idea that creates a mix of reactions.

"It could prevent a life -- an innocent life -- that was probably gone too soon," Twumasi said.

"There should be a curfew, I do agree with that," shopper Laci Irwin added.

"Maybe we're a little bit too protective sometimes," another shopper said. "They have to have some freedom at some point or another."

Concord's Mayor, Bill Dusch, told NBC Charlotte the shooting is, "beginning to start discussions with Law Enforcement, Council, City Staff and Mall management to ensure our citizen's safety. At this time, we do not have any position on curfews."

The petition has been signed by nearly 10,000 people since its creation. For now, parents will hold their children close as others promote love instead of violence.

RELATED: 'We just need to love each other' | Remembering Charlotte homicide victims of 2019

"Everybody be nice, just be cool and be nice," Griffin said.

NBC Charlotte reached out to Simon Property Group, the owner of Concord Mills Mall. They provided the following statement:

“Safety at Concord Mills is our top priority.  We are Department of Homeland Security (DHS) Safety Act certified – the country’s highest safety designation.  We have a number of proactive security measures in place, both seen and unseen.  We conduct multiple safety drills each year, one of which is always an active shooter drill.  Every tenant is strongly encouraged to participate in these drills.  Every tenant also receives and confirms receipt of a Tenant Emergency Guide and, as part of our Comprehensive Emergency Management Plan (CEMP), we ensure they each have an up-to-date emergency plan in place.  We also maintain a close working relationship with the Concord Police Department and have a collaborating police sub-station on-site to help provide and maintain a safe environment at our property.”