Dr. Robert Lesslie, his wife, Barbara, and their two grandchildren will be laid to rest after a celebration of life Wednesday afternoon. 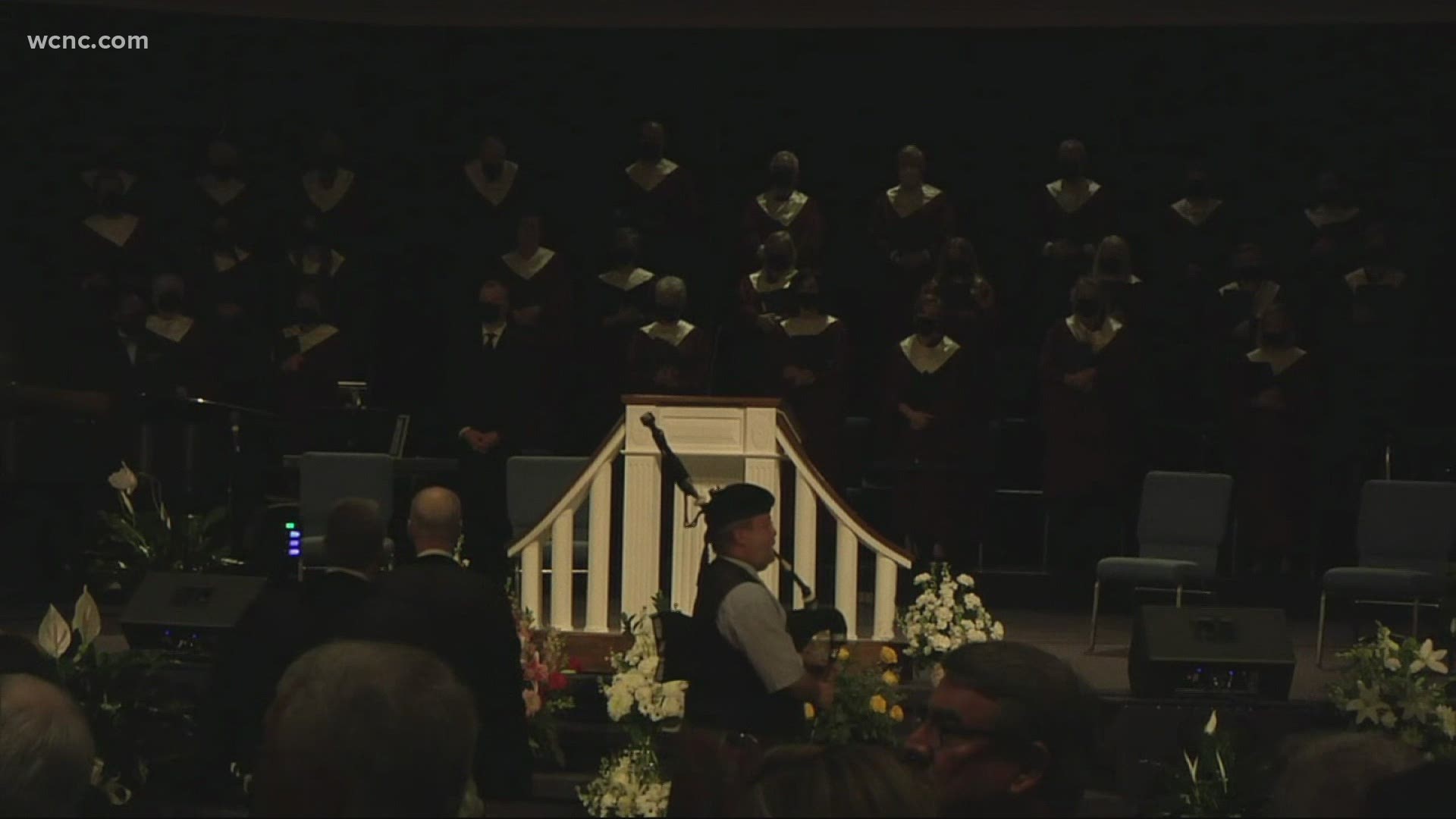 ROCK HILL, S.C. — Four family members who were shot and killed in their home in Rock Hill last week were laid to rest Wednesday after a private funeral service.

Dr. Robert Lesslie, his wife, Barbara, and their two grandchildren, Adah and Noah, were honored during a private celebration of life at West End Baptist Church. The service began and ended with Lesslie's favorite instrument, the bagpipes; the center of the service was the family's faith in God.

"Unless they were out of town, Robert and Barbara, Adah and Noah were always in worship," their pastor J. Barry Dagenhart said.

The family could be found at church every Sunday, and often on Wednesdays as well, Dagenhart said. Barbara was delighted to teach children Bible study, Robert was a church elder who pored over the scriptures.

Friends and family who attended the service heard stories of Lesslie's "quick wit" and his ability to lighten tense moments. Barbara was remembered for the creative ways she would decorate the rooms in the church and entertain the children.

Dagenhart also shared stories of the couple's generosity and enthusiasm. They hosted picnics at their home, Dagenhart said, and invited the entire congregation.

"Robert and Barbara always made you feel better," the pastor said. "Regardless of what you were going through, they could speak to the heart."

The children were remembered as caring souls who "knew kindness and practiced it."

The family had expressed their desire to grieve their loved ones in private. To honor that request, WCNC Charlotte went to the family medicine practice that Dr. Lesslie founded decades ago instead of visiting the church.

While the service was closed to the public, the family had a livestream of the memorial. In lieu of flowers, the Lesslie family has asked the community to donate to Camp Joy, a retreat for people with special needs, a cause that was dear to the Lesslies' hearts.

Jane Jordan, a classmate of the Lesslies, got to see the couple's generosity firsthand at Erskine College in the 1970s.

"They were just really warm, just wonderful people," Jordan said. "I can't believe this has happened."

Friends said the Lesslies were people of faith, who will be sorely missed at their church, and also in the community. It's a void that will never be replaced in the lives they touched.

"It is just a sad, sad day to see such wonderful lives be taken in such a senseless manner," Skip Tuttle, a close family friend, said.

Dr. Lesslie, his wife, and the two children were all found dead inside their home from gunshot wounds. Two HVAC technicians working at the home also died from their injuries.

Former NFL player Phillip Adams was identified as the gunman. He was found dead in his father's home in York County after an hours-long standoff with police. His brain will be tested by researchers for the degenerative disease chronic traumatic encephalopathy, more commonly known as CTE, which has been shown to cause violent mood swings and other cognitive disorders.

James Lewis, one of the two workers killed in the shooting, will be laid to rest in Gastonia Thursday. Robert Shook's family is finalizing funeral plans, as well.

RELATED: Suspect in Rock Hill shooting will have brain probed for trauma-related harm