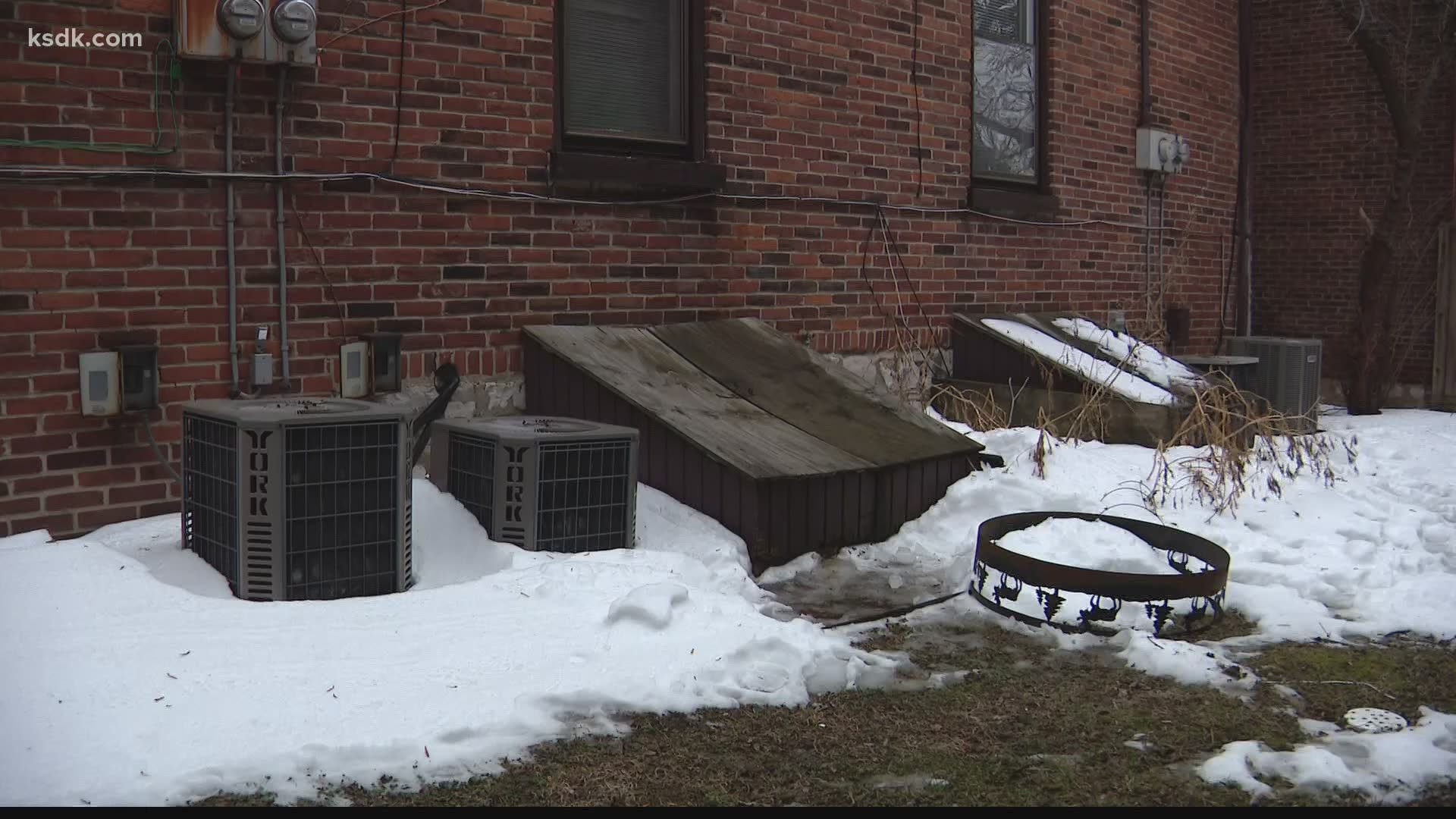 ST. LOUIS — During recent record-setting cold, a 75-year-old woman and her husband accuse their landlord of leaving them without heat to fend for themselves. They claim to have chronic health issues that make the living conditions all the more dangerous - a situation the property management company disputes.

For 14 years,  Ann McCullough has lived in a warm apartment in St. Louis' historic Soulard neighborhood to protect her from the worst of winter. For the past few weeks, though, she says her home has been freezing due to a faulty furnace.

“It is 7 degrees outside. I have a medical condition, and my husband has cancer,” McCullough said.

In early February, McCullough says she informed their landlord, Select Leasing & Management, that the furnace wasn’t working in their vintage home. This is a huge issue because she told 5 On Your Side that she has recently had two brain surgeries that have compromised her health, especially in cold temperatures. She said management did dispatch someone out to look at the problem but did not fix it.

"I’m like, how do you treat tenants like this?” McCullough said. “They take your dignity, they don’t care. They take your rent but won't come do the repair."

McCullough said after several visits from a heating and air conditioning company and maintenance men, she was informed that the furnace filter needed changing. When first contacted by 5 On Your Side earlier this week by phone, a manager with Select Leasing & Management told us that changing the furnace filter is the tenant’s responsibility. The manager, Joe Kelso, also said when temperatures are in the single digits or colder like they were last week, some of the cold is going to get inside of the apartments.

Yet McCullough said that’s never been an issue in her 14 years living in the home. Kelso also disputed her claim that conditions were unlivable, saying his staff recorded the temperature in the 70s in her apartment. McCullough said she’s had to use space heaters and the oven -  a fire hazard - just to heat it up to 60 degrees.

To change the filter, she said accessing the basement where the furnace is located is a huge problem for her. Given her physical condition, it’s hard and dangerous for her to walk down an alley, behind her building and climb down into the basement to service the furnace. She said even if she could physically get down there, she doesn’t know what she’s doing and is fearful she would be responsible for any damages.

“That basement has been wet, full of water, everything has been down there,” she said. “The police had to come get homeless people out one time.”

Things took a turn for the worse this weekend. On Saturday, she smelled gas coming from the vent. When Spire arrived to check out the issue it was discovered the basement had flooded, forcing them to turn off the gas, McCullough said.

No furnace, no gas, no hope and now dwindling cash, McCullough and her husband said they finally moved in a hotel on their own dime. We interviewed her by video call from the room where she says the elderly couple is temporarily living.

She also said Select Leasing & Management has stopped communication with her about her concerns.

The couple is trying to move out, but due to their health and the pandemic, McCullough says that has been very challenging too.

After our story aired on Sunday, February 21, Kelso contacted 5 On Your Side to respond in more detail to her allegations.

Officials at Select Management & Leasing said they take great pride in the properties that they manage. As for her complaint that the couple's plea for warmth went unanswered, Kelso says a maintenance worker responded to every one of her requests.

During these past few cold weeks, the company tells us a new thermostat was installed, a furnace filter was delivered and the heating system was serviced multiple times when maintenance requests were filed. A space heater was provided for the couple. All of the visits from the heating contractor and maintenance crews were free of charge for McCullough, according to Select Management. The company says the flooded basement was caused by a pipe in a vacant apartment that burst, and it's currently being handled. Crews are in the process of getting the gas turned back on.

Select Management added that this particular building is older and in need of repairs, which are currently ongoing. Both McCullough and Select Management said the St. Louis City Health Department also visited the property due to the issues. Select said following that visit they were not cited for any issues.

Select also said that despite Soulard becoming a popular neighborhood in St. Louis to live in, McCullough's rent hasn't gone up since 2012.

According to the Missouri Landlord-Tenant Law, landlords are required to "make property habitable before tenants move in" and "refrain from turning off a tenant’s water, electricity or gas."