Dozens of people reacted to the Caldwell County Sheriff's Office's Facebook post announcing the raffle before it appeared to have been taken down. 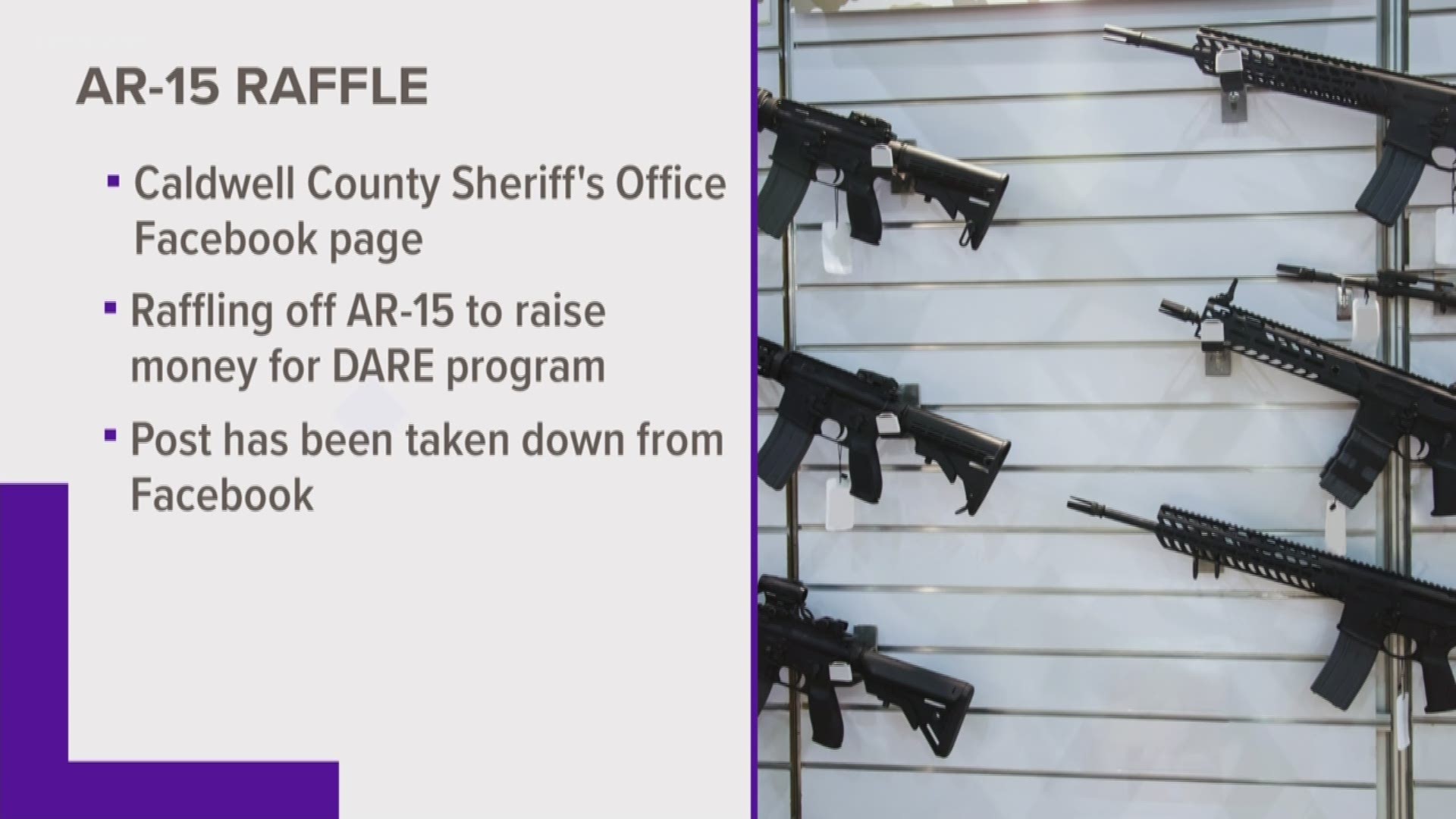 LENOIR, N.C. — The Caldwell County Sheriff's Office received mixed reactions from people after it announced on Facebook it was raffling an AR-15 to raise money for the county's D.A.R.E. program.

The post, which appeared to have been taken down Tuesday afternoon after less than 24 hours online, had been reacted, commented and shared by dozens of Facebook users.

The sheriff's office said in the post it would give away a custom-built AR-15 and a Henry Lever Action .22 long rifle to two people, who must possess either a purchase permit or a concealed handgun permit.

NBC Charlotte reached out to Sheriff Alan Jones and the captain overseeing the D.A.R.E. program about the raffle and whether it will still happen after the original Facebook post disappeared.

We received this statement on Thursday:

Once the drawing is held the winners of the rifles will be presented with a Certificate indicating which rifle was won along with the name of the person that won the rifle.  The winner at that point will be required to go to the Federally Licensed Firearm Dealer to claim the firearm.  In addition to a standard background check that is conducted when a rifle is purchased, the Caldwell County DARE program will be requiring the winner of the rifles to also obtain a Gun Purchase permit prior to claiming the rifle at the Federal Firearms Dealer.  A gun purchase permit currently is not required when purchasing a rifle but will be required to claim the rifles that will be raffled.

We are aware that there are some individuals that are unhappy with the fact that The Caldwell County DARE Program will be raffling firearms; however, the goal of the raffle is to raise money that will benefit this worthy program in continuing to combat drug addiction and abuse.  The Caldwell County DARE Program will continue to strive to divert children from using illegal drugs and alcohol.  The shareholders of this program will examine the fundraising methods that are utilized in the future.

"In addition to having full-time deputies in every school, I have always supported the DARE program and feel that DARE is important in changing the lives of children in this county. During my time as sheriff, we have expanded the DARE Program from 2 to 14 DARE officers that are certified and will continue to use all resources available to beat drug usage in this county,” said Sheriff Alan C. Jones.

WHAT OTHERS ARE READING ON WCNC: