Towing in the heart of Charlotte on the rise, data says

There is an eye-opening Defenders investigation you need to see before finding your next parking spot. 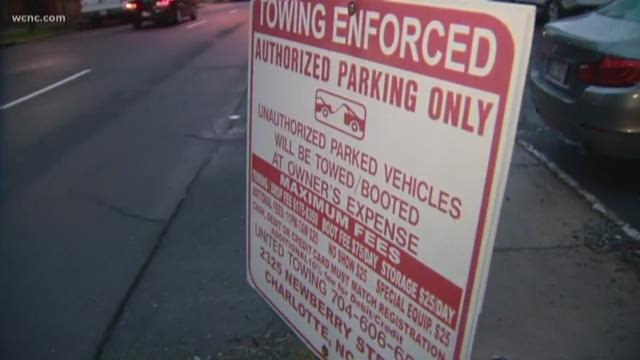 CHARLOTTE, N.C. -- There is an eye-opening Defenders investigation you need to see before finding your next parking spot.

New numbers show towing is on the rise in the heart of the Queen City. The Defenders team is investigating hot spots where your car could be most at-risk.

The Defenders team learned the Better Business Bureau received 65 complaints in 2017, including at some of the busiest spots in Charlotte.

NBC Charlotte talked to one driver who described what happened to him at the Starbucks on East Boulevard in Dilworth.

He said a towing company put a boot on his truck shortly after he went to get a coffee.

“I was really upset,” said Alan Vanderschouw. “I wasn’t even in there for five minutes.”

Vanderschouw parked in a spot reserved for another tenant. NBC Charlotte asked if he saw the towing sign.

He shared photos with NBC Charlotte that appear to show shrubs blocking the towing sign. However, he said the towing company put a boot on his truck nonetheless.

“It’s definitely predatory towing because it was so quick and they didn’t really give me a chance to move,” Vanderschouw said.

The towing company locked down his vehicle, but he snapped photos of theirs. The Defenders team learned the company seen in the photos, United Towing, received an "F" rating from the BBB.

NBC Charlotte asked the BBB how a company gets an F rating.

“It’s primarily based on how they handle or don’t handle customer complaints,” said Tom Bartholomy, president of the BBB in the Charlotte area.

From there, the investigation into alleged predatory towing led NBC Charlotte to South End; a hot spot for complaints against towing companies last year, according to the BBB.

“They just lay and wait and ready to pounce on somebody to make a mistake,” says Bartholomy.

The Defenders team obtained new numbers that show towing is on the rise in the Queen City.

However, unlike other companies, the city’s towing contractor, Eastway Wrecker, gets an A rating from the BBB.

NBC Charlotte called United Towing, the company that booted Vanderschouw’s vehicle, for answers about their F rating. At first, the owner agreed to an on-camera interview but then a week later, he changed his mind.

Over the phone, he said everyone has an excuse when they’re being towed.

“[It’s] somewhat of a shady practice to boot someone’s car when I was obviously here as a customer, I even had a coffee in my hand,” Vanderschouw said.

NBC Charlotte also sent photos to United Towing of the obscured warning sign. The owner responded by saying there are plenty of other signs around.

Vanderschouw said he’s not sure if he will ever go back to the Starbucks.

“If they change the parking, I may come back here,” Vanderschouw said.

However, Vanderschouw said there are other places to get coffee without the additional risk.

NBC Charlotte also asked city leaders if there needs to be more parking in Charlotte. They said they couldn’t answer that because a study has not been done yet.