From Massachusetts with love: Truckloads of food arrive in Texas, courtesy of US veterans, New England Patriots

Freeport Marine Ernesto Casas Jr. texted a fellow Marine about the need for food in Texas after last week’s deadly winter storm. And this happened. 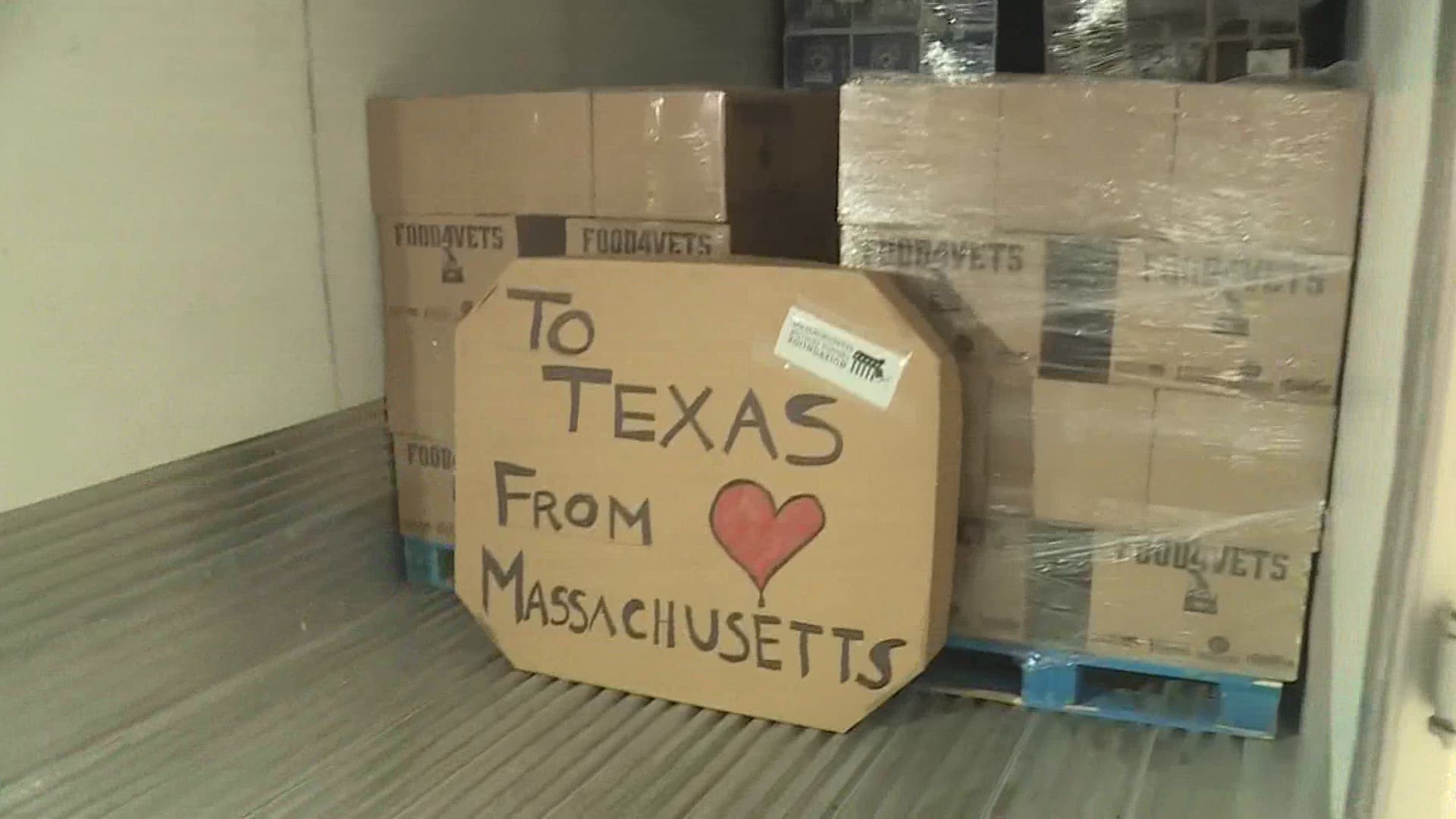 HOUSTON — Cheers erupted in Freeport Friday morning when two trucks loaded with 150,000 pounds of food rolled into town from Massachusetts.

After last week’s historic storm caused millions of homes and businesses in Texas to lose power, families had food spoil and grocery shelves were bare.

Since then, the Houston Food Bank and other pantries have been overwhelmed at food drives with cars sometimes lined up for miles.

From east to west and lot of spots in between, A Marine veteran from Lake Jackson travels the country visiting families of fallen soldiers and first responders to honor them.

“I tell them that their loved ones will never be forgotten,” said Ernesto Casas. “That’s my primary goal.”

Casas travels include the states of New Mexico, California, New Hampshire, Tennessee, and Massachusetts, where he met Representative Steven Xiarhos.

“When my son, Nick, was killed in Afghanistan, this man from Texas came all the way to Massachusetts and visited us,” Rep. Xiarhos said.

A Marine veteran, who travels the country honoring fallen soldiers, asked for food and got 150,000 pounds of it. An awesome story is coming up tonight at 10 on #KHOU11. I hope you watch it. #Marines #Veterans #Massachusetts #Texas #winterstorm pic.twitter.com/tRpa9KFKHD

Casas and Xiarhos have kept in touch through the years. Last week, when Xiarhos asked how Casas and his community was holding up after the deadly winter storm, Casas had an idea.

“He’s (Xiarhos) always said if you ever need anything just reach out," Casas said.

That’s exactly what folks in Massachusetts did. Katsiroubas Bros., a produce wholesaler in New England, pitched in to secure 150,000 pounds of food.

Volunteers loaded pallets of food on two tractor-trailers and they hit the road.

Garivey plans to meet the trucks at 8 a.m. with some of his cruisers for a Texas-sized welcome.

“Give them the escort they deserve, traveling hundreds and thousands of miles just to get here," Chief Garivey said.

The food will be distributed to Freeport churches and food banks, then given to families who could use the help.

It's an amazing gift for Texas thanks to one man’s Texas-sized heart.

The food is being supplied thanks to the Massachusetts Military Support Foundation, USA4Veterans and the New England Patriots Foundation.

“A Marine has reached out to a fellow Marine for help. I’m proud that Massachusetts and USA Military Support Foundations are able to answer this call and I am grateful to my incredible partners – New England Patriots Foundation and Katsiroubas Bros., for helping to make this possible,” MMSF President Don Cox said.