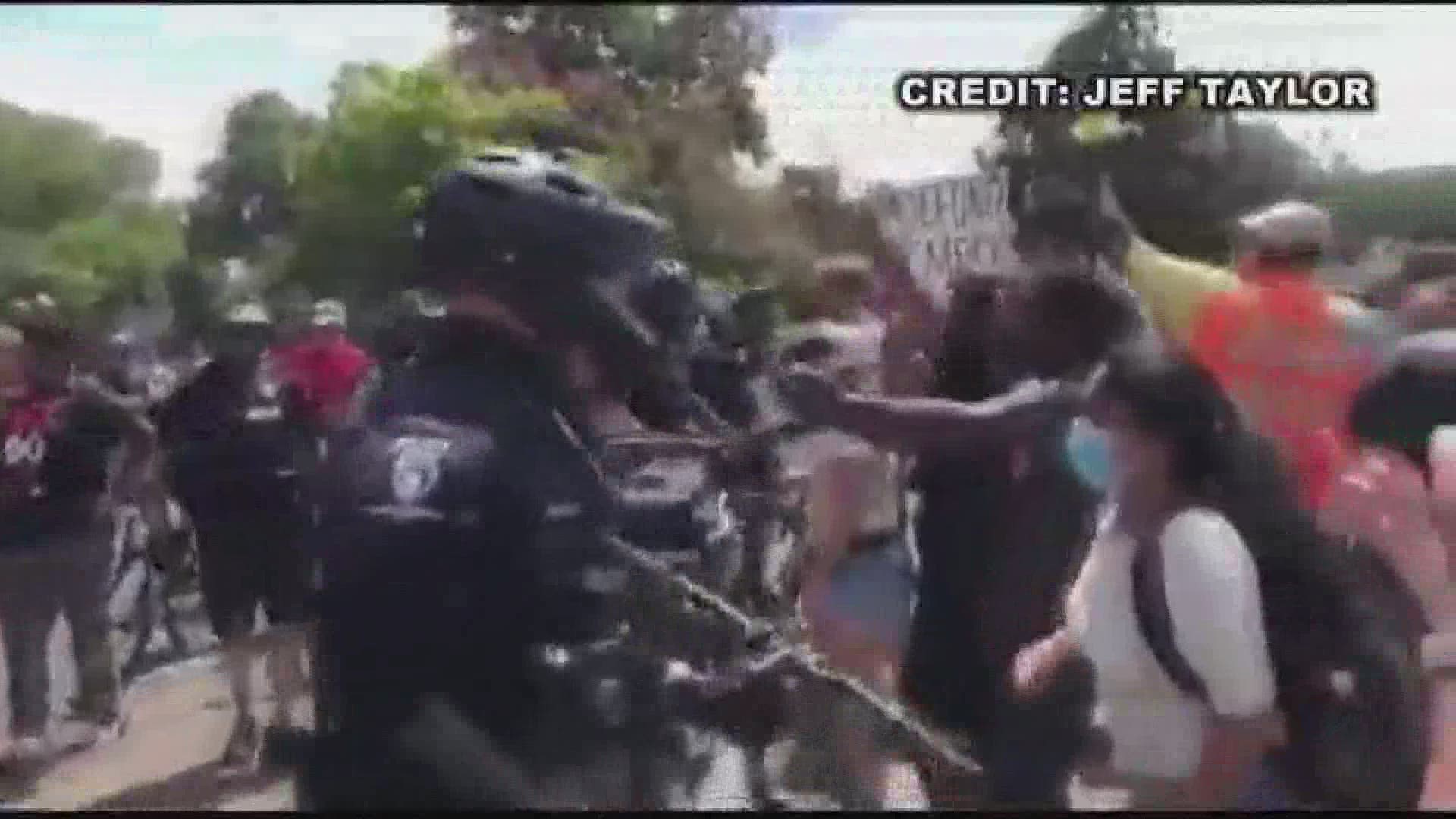 Video shows CMPD using pepper spray on a protester at Marshall Park Saturday afternoon. In the video, a protester appears to grab or push one of the officer's bikes. Police said in a statement that the protester attempted to steal the bike, and the pepper spray was deployed on that particular person.

It happened at a Blue Lives Matter rally in uptown Charlotte, aimed at showing support for police. "Defund the Police" protesters later marched to the park where the rally was taking place.

A video shared with WCNC Charlotte by Jeff Taylor shows the incident between police and protesters. Behind the line of police, Blue Lives Matter rally attendees started chanting "USA" repeatedly after the pepper spray was deployed.

Editor's Note: The below video may contain mature or sensitive content and language.

Black Lives Matters protesters have showed up to a Blue Lives Matter rally at Marshall Park. In this video, you see CMPD use pepper spray during a confrontation. Hear from those who were there at 6 @wcnc https://t.co/a0uLMXnCDH

"We were met with violence from white supremacists but also violence from the police," said Ash Williams, Court Organizer with Charlotte Uprising. "They pepper-sprayed folks and right now we're administering medical attention to the folks that were pepper-sprayed."

Police said that the person accused of attempting to steal the bike was pepper-sprayed, though in the video it appears several people were impacted.

"Pepper spray is a lot more intense than we've experienced in the past," Williams said. "It burns more."

It comes just days after a judge dissolved a temporary restraining order that limited CMPD's use of riot control agents during protests.

RELATED: NAACP takes CMPD to court to prevent use of chemical agents

"That's really unfortunate that CMPD is back to their old tricks," Williams said.

Maya Pillai, a Blue Lives Matter supporter in attendance, said the Black Lives Matter protesters flipped over tables that had been set up for the event.

"We certainly did feel that it was an infringement on our constitutional beliefs," Pillai said.

Pillai said she feels things could have gone better between the two groups.

"Both sides are obviously upset with what's going on," Pillai said. "But at the same time, we wish we would've been able to receive a little more respect from the other side."

Williams told WCNC Charlotte she feels the Blue Lives Matter group is "out of touch" with Charlotte Uprising and protest groups.

"What we're demanding is for the police to be defunded so I know people are wanting to counter that," she said.

CMPD said in a statement that no other agents were used during the event, and no arrests were made.

Central Division Officers managed the Blexit Rally today. Counter protesters were also on scene. When one protester attempted to steal a patrol officer’s bicycle, officers deployed pepper spray on that individual. No other agents were used during the event. No arrests made. #clt pic.twitter.com/7rRLTKox0O

Zuckerberg, Bezos, other tech CEOs to testify on competition

Some worry that White House briefings are a broken tradition

Chinese researcher charged with US visa fraud is in custody