"I really firmly believe as long as we keep on doing this each and every single day that we possibly can, that change will come," one protester said. 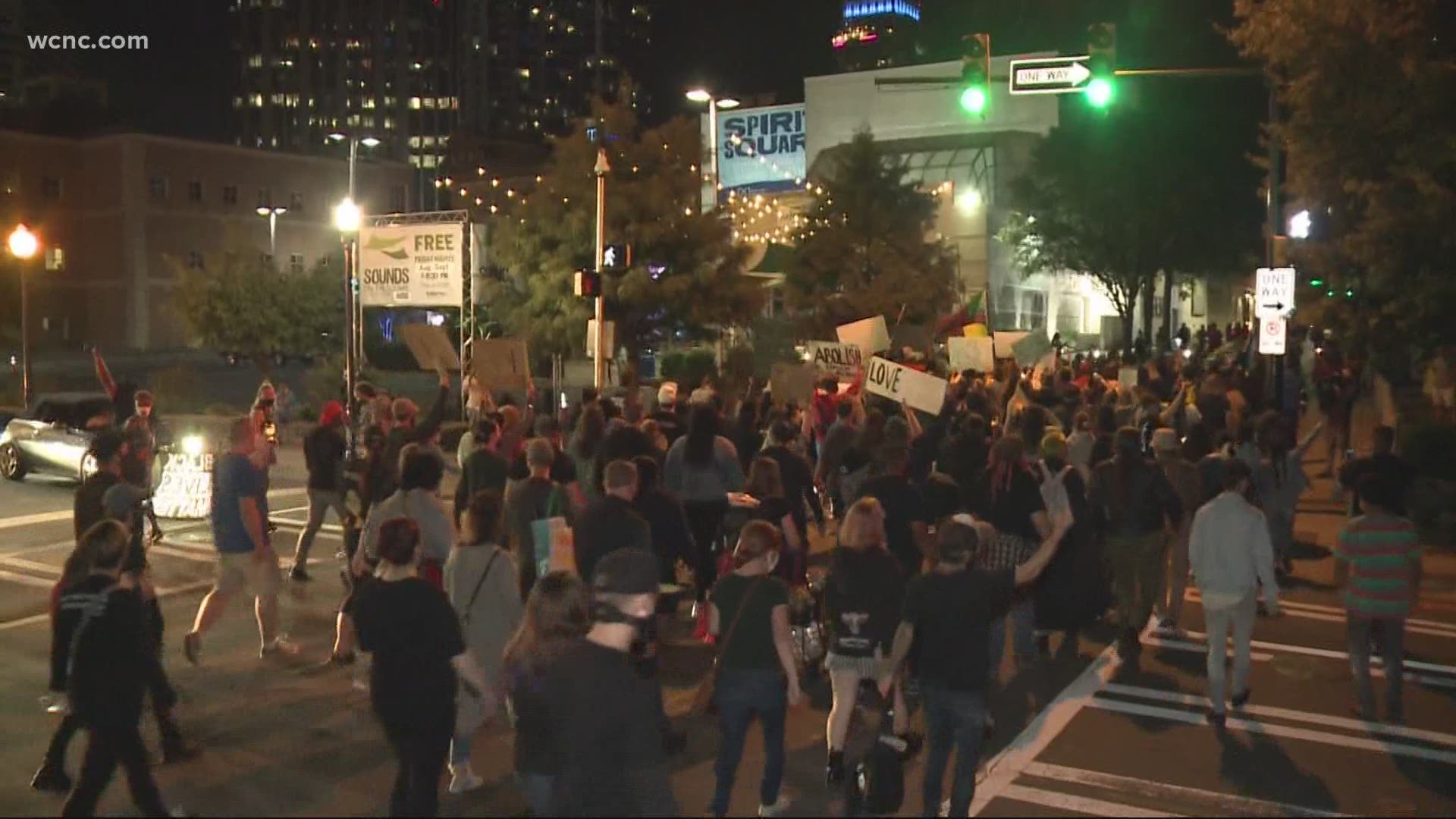 CHARLOTTE, N.C. — Peaceful protesters gathered in uptown Charlotte Saturday night in response to a Kentucky grand jury's decision to not charge a former Louisville police officer for the shooting death of Breonna Taylor.

Some gathered at the Black Lives Matter mural in uptown Charlotte, though groups later gathered as well at First Ward Park in uptown.

"I really firmly believe as long as we keep on doing this each and every single day that we possibly can, that change will come," Witherspoon said.

CLT Uprising is getting ready to take to the streets of Uptown tonight after the #BreonnaTaylor grand jury decision. @wcnc pic.twitter.com/Db35iPXur1

Protesters in uptown Charlotte brought the energy with them — video taken by WCNC Charlotte reporter Lexi Wilson around 8:45 p.m. appears to show a drum line performing amid the protesters as others cheered along.

"I was angry, I felt betrayed," protester Dylan Gossdtt said.

Saturday night protests in uptown Charlotte remained peaceful. The Charlotte-Mecklenburg Police Department has not provided any information on their presence at the demonstrations.

There’s a lot of energy out here tonight. Protesters are taking to the streets on uptown for #BreonnaTaylor @wcnc pic.twitter.com/y7s92kRvK8

The Jefferson County, Kentucky grand jury recommended Wednesday three counts of first-degree wanton endangerment for former Louisville police officer Brett Hankison for firing shots that went into a nearby apartment the night of Breonna Taylor's death. No other officers involved were indicted.

Attorney General Daniel Cameron's office said it did not investigate Kenneth Walker or Breonna Taylor, claims of civil negligence by the officers or the narcotics case against Jamarcus Glove or the search warrant obtained for Taylor's apartment.

Across the United States Wednesday night — including in Charlotte — protests and demonstrations followed.

"It's hard to be proud of a nation where we can't get justice," Gossdtt said.

That outrage has been felt across the country and in Charlotte. Some say this time, the outrage is less about police reform and more about a failed system.

"We got to start at someplace and one small step will take us to a big dream at the end of the day," Witherspoon said.

But there is still hope — activist Ash Williams said change is happening in Charlotte. For example, CMPD adopting the "8 Can't Wait" initiative aimed at police reform. The eight new policies include banning chokeholds, de-escalating tactics, and duty to intervene.

RELATED: CMPD implementing all '8 Can't Wait' use of force policies

"We pushed really hard for that, safe collation, and a lot of people here in charlotte together and were going to keep pushing, keep protesting till we get the other things we want to demand," Williams said.