Wildlife officials are investigating reports of illegal hunting across the Charlotte area. 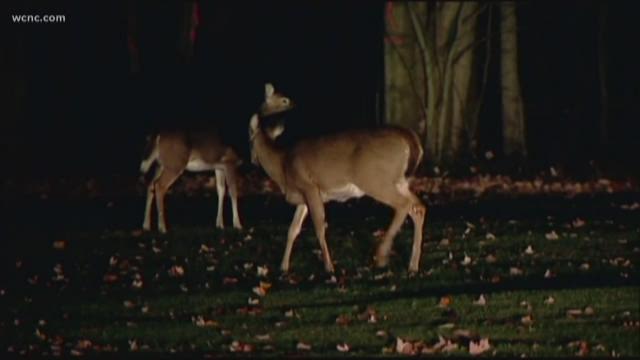 CHARLOTTE, N.C. -- It's not hunting season but according to a south Charlotte resident, it's not stopping people from hunting deer in the same place he walks his dog Zoey.

"No one spends $300 on a feeder, all the effort to put a deer stand up in the tree, a blind behind their house and sets up a spotlight because they want to look at deer," said Adam Hansil, a south Charlotte resident.

Wildlife officials are investigating reports of illegal hunting across the Charlotte area.

"Without a doubt in your mind, you think somebody is back here illegally hunting deer?" asked NBC Charlotte's Xavier Walton.

"There's no doubt in my mind," Hansil responded.

Adam has the evidence to prove it. Besides the deer stand, blinders and spotlight, he 's also found two arrows while walking his dog. He's reported everything to the North Carolina Wildlife Resources Commission and the Charlotte-Mecklenburg Police Department.

"They admit the issue is they have to catch the guy red-handed," Hansil said.

Wildlife officials say they're actively investigating several illegal hunting incidents including a pair of deer stands discovered in a south Charlotte subdivision, which were found near Carmel Road and N.C. 51.

"It's sad," said Lisa Davis, a south Charlotte resident. "It's crazy that it's actually going on right here in our neighborhood in our own backyard."

According to officials, it's illegal to hunt with bow and arrow or a gun within Charlotte city limits. But still, wildlife officials say it still happens and Adam wants it to stop before it's too late.

"You don't want to wait until someone gets hurt," Hansil said.