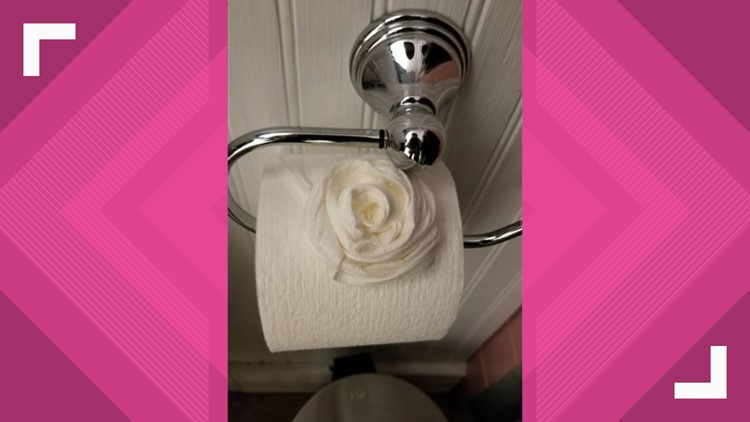 Photo by: Nate Roman via NBC News
The intruders left an Origami rose on Nate Roman's toilet paper after cleaning his house.

Massachusetts man says someone broke into his home ... and cleaned it

It was a clean getaway.

A Massachusetts father came home to find that someone had broken into his house. But nothing was missing.

Instead of stealing, the intruder or intruders cleaned the house.

Nate Roman, 44, of Marlborough, said he had returned home with his 5-year-old son on May 15 when the little boy noticed that the back door was open.

“Nothing was damaged, nothing was taken … just arranged in a really creepy way," Roman told NBC News in a phone interview Thursday.

Roman said as he inspected the house, he smelled bleach and other cleaning solvents and could tell that the place had been tidied up.

His son's room, which they had left messy that morning, was immaculate, with the bed made and stuffed animals neatly arranged. The toilet paper in his bathroom had been adorned with "this very neatly folded rose," he said.

Roman said every room had been cleaned, except for the kitchen.

“I was immediately worried that someone was in the house,” he said.

Confused and not sure what to make of the situation, he called the police.

A Marlborough Police Department spokesman told NBC News on Thursday that officers had no leads or suspects in the case.

Roman said he believes someone working for a house-cleaning service may have confused his home for another. He said his alarm did not go off because he forgot to turn it on. He also thinks he forgot to lock his back door that day.

While the incident left him a little shaken, Roman said it was a reminder for him to double-check that his doors are locked.