Amanda DeAngelis posted a video of the seat smoking on Facebook to warn other parents. As of Wednesday night, it had more than 82,000 shares and 8.8 million views. 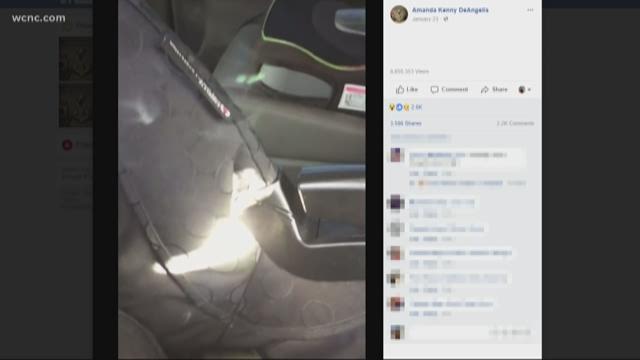 CHARLOTTE, N.C. -- A mother said the baby mirror she installed in her car was reflecting enough sunlight to scorch her daughter’s car seat.

Amanda DeAngelis posted a video of the seat smoking on Facebook to warn other parents. As of Wednesday night, it had more than 82,000 shares and 8.8 million views.

“This is my baby's car seat smoking,” DeAngelis is heard saying in the video. “Because there is a mirror on the back of the seat so I can see her, and I just took her out of the seat and smelled smoke and saw the smoke coming up. This is caused by the sun's reflection into the car seat.”

Shannon Bullock, director of safe kids North Carolina, said they recommend avoiding any unnecessary accessories in the car, mirrors included. They can cause harmful reflections, but they can also become projectiles in a crash.

“They could go 40, 50 miles an hour in the vehicle,” Bullock said. “We know that parents want to look back at their children make sure that they're OK, but it's not safe.”

The manufacturer of this particular car seat, Britax, is based in Fort Mill, South Carolina.

In a statement, a company spokesperson told NBC Charlotte: "Direct sunlight reflecting off shiny objects in a car can be dangerous. The federal government requires all car seats and the interior of vehicles to meet flame retardant standards. In this incident, the flame retardants in the car seat did their job. As always, parents and caregivers should exercise caution when using any after-market car seat accessories, including back seat mirrors. All back seat mirrors should be installed correctly, securely attached and mounted to the vehicle head restraint. Incorrect installation can result in injury if the mirror becomes a projectile in a crash."