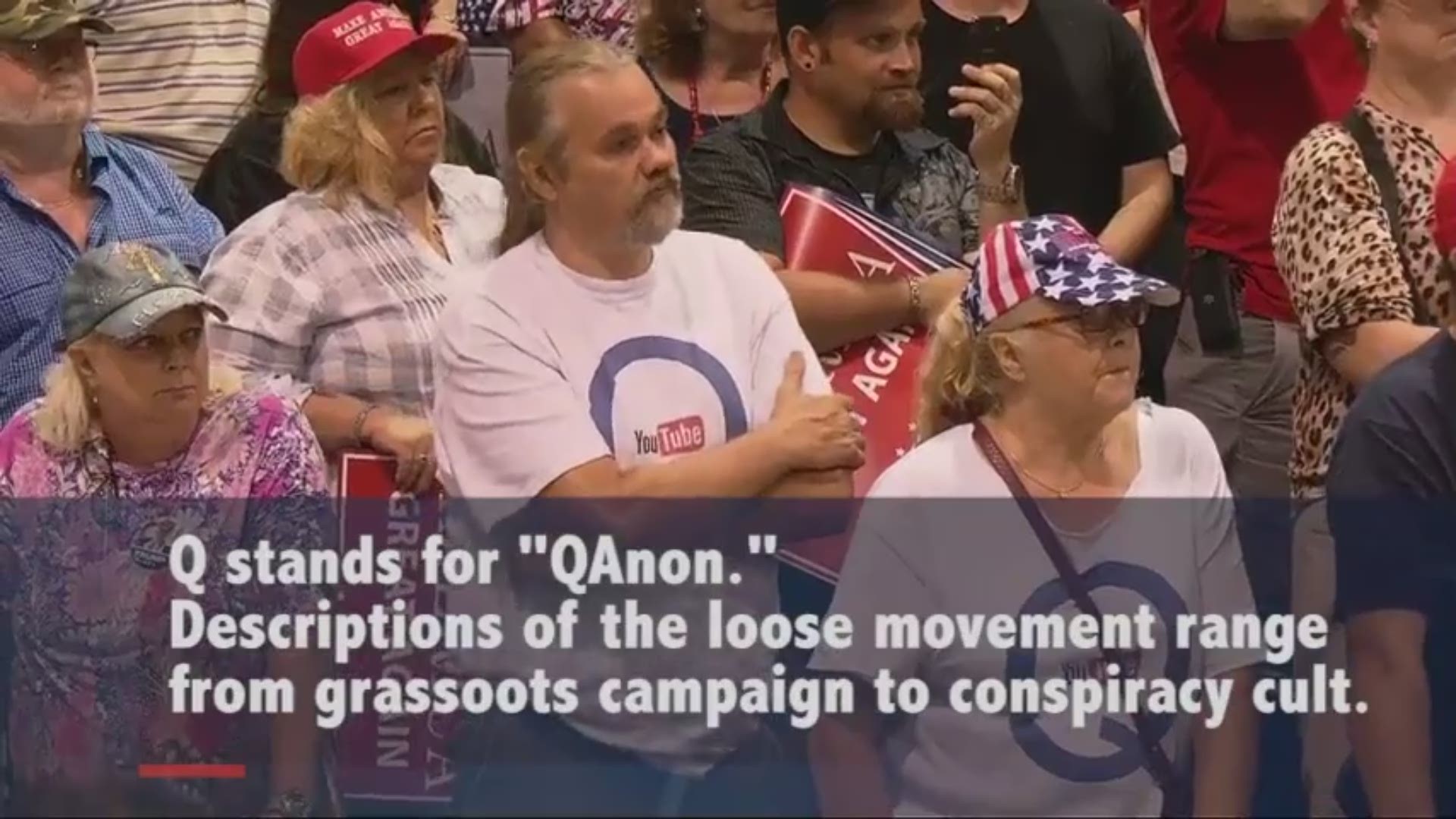 Credit: Rod Millington, EPA-EFE
People cheer as President Donald Trump speaks at the Florida State Fairgrounds Expo Hall in Tampa, Florida, July 31. A sign showing the letter Q can be seen. Q stands for QAnon, a conspiracy theory believed to have originated in 2017.

"Q" signs at President Trump's Florida rally aren't a new slogan for the administration, but rather a conspiracy theory that grew out of comments on an anonymous message board last year.

"Q" is a reference to QAnon, a group of people attempting to decode vague, anonymous comments posted on dark web message boards such as 4chan and 8chan. It's also been called "The Storm" and linked to conspiracy theory Pizzagate, that prompted a 28-year-old man to open fire inside a D.C. pizza shop.

Joseph Uscinski, a University of Miami professor who has been studying conspiracy theories for decades, told USA TODAY people who follow QAnon are typically "Trump supporters who have a strong conspiracy mentality and are probably evangelical."

Here's what you should know about QAnon:

A user named "Q" began posting messages on the dark web in October of 2017, The Guardian reports. Q is reportedly a person working in the nation's energy department who has a top secret clearance. QAnon is the community of people trying to understand the meaning of Q's messages.

What do followers believe?

It's difficult to say. "Q" claims to know about a large child sex trafficking ring within the government, or "deep state," Uscinski notes. This user has also posted claims saying Hillary Clinton, and John McCain, are wearing ankle monitors and Clinton and former president Obama are under investigation, New York Magazine reports.

Roseanne Barr has expressed support for QAnon through tweets, referencing in since-deleted messages the "untold story" of "pedophile rings," The Washington Post notes, as well as requesting QAnon to direct message her.

Conspiracy theorist and radio host Alex Jones featured Q in a December 2017 show, but has since distanced himself from the movement.

"Even Alex Jones is very skeptical, Uscinski said. "So, that tells you something."

Inside Florida State Fairgrounds' Expo Hall Tuesday night, Q posters and shirts peppered the crowd chanting "fake news" and "build the wall." While QAnon followers have been a part of public events in the past, this sighting is making QAnon more mainstream. It was the group's "real coming-out party," Washington Post columnist Margaret Sullivan notes.

More: Trump jokes about not acting 'presidential' during Florida rally