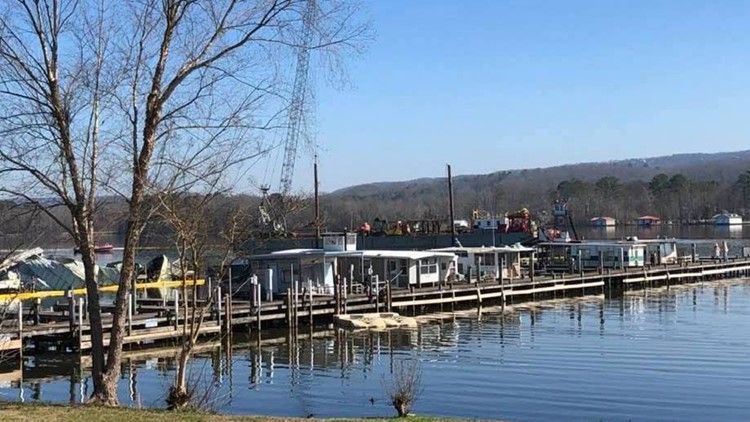 Photo by: Rocket City Now
Crews continue to work in the area of the Jackson County Marina Park dock that was the scene of a deadly fire on Monday in Alabama.

Investigators are focusing on one boat in particular as the cause of a massive Alabama marina fire that killed at least eight people, including four children.

Fire Chief Gene Necklaus said Tuesday that crews will raise each sunken craft at the Jackson County Park Marina to determine whether additional people may have died.

The Jackson County coroner confirmed to TEGNA station WZDX in Huntsville that four of the eight victims were children ages 7, 9, 10 and 16 years old. Victim identifications have yet to be released.

The fire destroyed a dock and approximately 35 boats.

The cause of the fire is still under investigation, with special fire teams from the ATF working alongside local and state officials to determine what happened.

“We woke up hearing screams and popping noises,” Mandy Durham told WZDX. “When we woke up, we could see red through the window. Within 15 to 20 minutes, the whole dock was in flames. All these boats have propane tanks and gas tanks, and that’s a lot of fire.”

The blaze was reported shortly after midnight as people living in the boats were sleeping, and consumed the wooden dock and an aluminum roof that covered many of the vessels, cutting off escape routes and raining debris into the water.

Floating barriers have been installed to keep oil and other materials from spreading into waters near the marina. The dock that burned is on a creek that feeds into the Tennessee River.