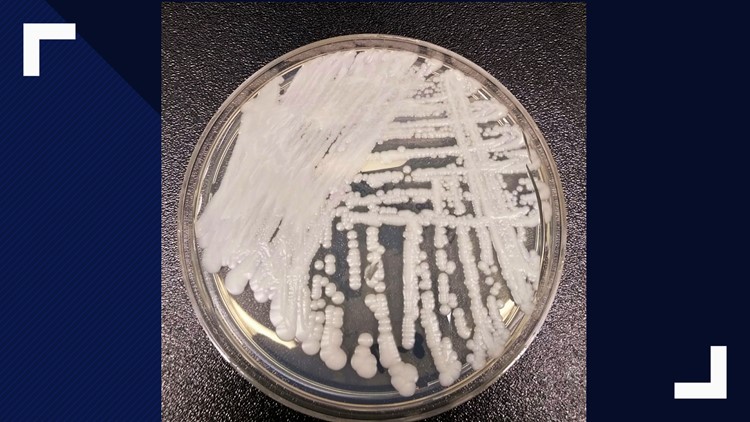 Photo by: AP
This undated photo made available by the Centers for Disease Control and Prevention shows a strain of Candida auris cultured in a petri dish at a CDC laboratory. On Tuesday, April 25, 2017, New York state health officials provided new details about a continuing outbreak of the infection. The count is 44 now, up from a half dozen last fall. The fungus is a harmful form of yeast that was first seen in a patient in 2009, in Japan. Scientists say it can be hard to identify with standard lab tests, and more cases are being reported as doctors are looking harder for it. (Shawn Lockhart/CDC via AP)

Health officials are warning of a drug-resistant fungus they are calling a "serious and global health threat." The Centers for Disease Control and Prevention says there are already 587 confirmed cases of the fungus, called Candida auris, in the United States.

C. auris is a type of yeast that can cause severe illness. It was first identified in 2009 in Japan and seen in the United States for the first time in 2013. C. auris infections have been reported in more than 20 countries. The yeast is often resistant to multiple antifungal drugs commonly used to treat other Candida infections, making it difficult to treat.

Infections have been reported in 12 states, with Illinois, New York and New Jersey citing the most cases.

People who have been hospitalized for a long time, had recent surgery, diabetes, a catheter or other lines or tubes entering their body or previously used antifungals or antibiotics are at higher risk of contracting a C. auris infection. The yeast is spread in healthcare settings through contact with contaminated surfaces.

The yeast can enter the bloodstream and spread throughout the body, leading to infections that can become fatal. C. auris has been known to cause bloodstream, wound and ear infections.

In May 2018, a man was admitted to the Brooklyn branch of Mount Sinai hospital with a C. auris infection and died 90 days later. The yeast was so pervasive in his hospital room that special cleaning equipment was needed to eradicate it and some of the ceiling and floor tiles had to be replaced, according to the New York Times.

“It’s an enormous problem,” said Matthew Fisher, a professor of fungal epidemiology at Imperial College London, told the New York Times. “We depend on being able to treat those patients with antifungals.”

The CDC recommends that anyone who believes they have any fungal infection or healthcare-associated infection see a healthcare provider.