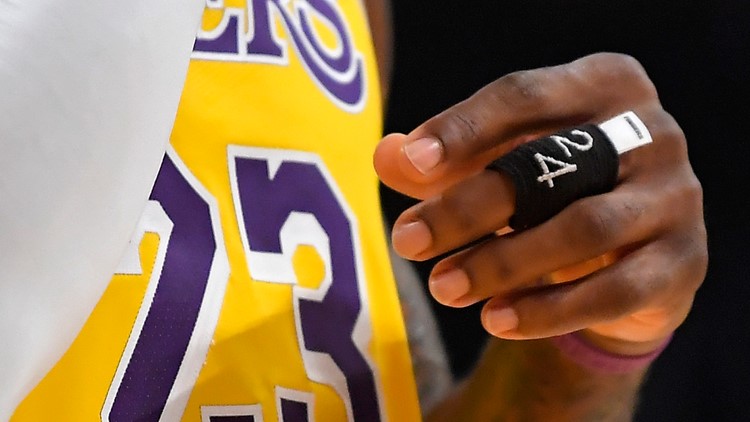 Photo by: AP
Los Angeles Lakers forward LeBron James' hand is seen with a wrap that features Kobe Bryant's number on it during the second half of an NBA basketball game against the Houston Rockets, Thursday, Feb. 6, 2020, in Los Angeles. (AP)

Details of Kobe Bryant's private funeral have been released

Kobe Bryant and Gianna Bryant were killed when their helicopter went down on the morning of Sunday Jan. 26 near Calabasas, California, with seven others on board. There were no survivors.

According to Extra, it is unknown who attended the Feb. 7 private memorial, but as the outlet points out, it appeared that Kobe's sister Sharia was in Los Angeles as recently as a few days ago. Video was shared on Instagram by Vanessa Bryant showing her daughter Capri standing up with Sharia's help.

A public memorial service is set for Feb. 24 at 10 a.m. local time at Staples Center in Los Angeles so the public can come together to honor the basketball legend and the 8 others souls lost on that tragic day. It was at Staples Center where Bryant played for most of his NBA career with the Los Angeles Lakers.

Los Angeles Mayor Eric Garcetti, quoted by E! News, said of the planned public memorial service, "we will absolutely do everything to make sure that this is done so that everybody can come to it as well." Mayor Garcetti spoke of his city saying, "we are one city that believes in each other, believes in something bigger than ourselves."

Kobe Bryant's wife Vanessa said, while dealing with the incredible loss of both a husband and a child, "I've been reluctant to put my feelings into words." Bryant said, "my brain refuses to accept that both Kobe and Gigi are gone. I can't process both at the same time. It's like I'm trying to process Kobe being gone but my body refuses to accept my Gigi will never come back to me. It feels wrong."

RELATED: 'My brain refuses to accept that both Kobe and Gigi are gone': Vanessa Bryant shares heartbreaking message

As the Associated Press reports, Kobe Bryant will be announced Friday at All-Star Weekend in Chicago as one of the finalists for this year’s Basketball Hall of Fame induction class. The finalists announcement is expected to be largely focused on Bryant's memory.

USA Basketball managing director Jerry Colangelo said, “I think every player, anyone who’s been in the game was incredibly affected by the loss of Kobe.” Colangelo, who was quoted in the Associated Press, went on to say, “A few days after it happened I was in Dallas for the Hall of Fame committee meeting to look at the candidates who will be announced in Chicago and to eventually put some individuals forward. And what do you think we talked about most of the time?”

The All-Star weekend in Chicago will be the first large gathering of the NBA family since the tragic death of Bryant, his daughter and 7 other people who were on that helicopter.