Greg Stephen faces potentially decades in prison after admitting to sexually exploiting and abusing at least 400 boys, including former players, their friends and other young athletes. 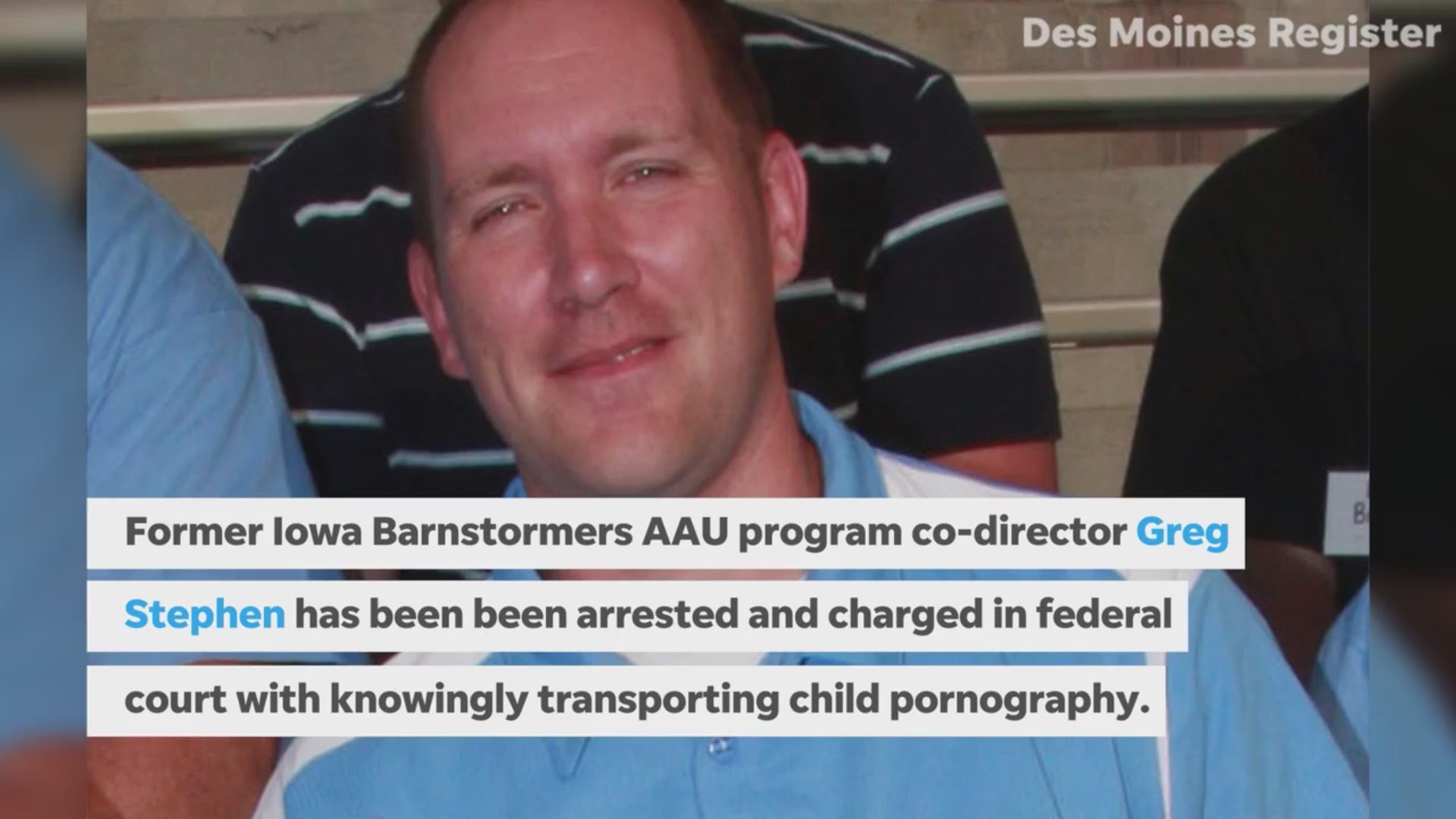 IOWA CITY, Iowa — A prominent Iowa youth basketball coach faces potentially decades in prison after admitting to a yearslong pattern of sexually exploiting and abusing at least 400 boys, including former players, their friends and other young athletes.

The massive scope of Stephen's abuse was revealed in a plea agreement filed Thursday after the former Iowa Barnstormers coach pleaded guilty to seven charges, including sexually exploiting minors and possessing and transporting child pornography, in federal court in Cedar Rapids.

Stephen's arrest in March shocked the basketball community in Iowa, where he for years was a coach and co-director of the Adidas-sponsored traveling program for the state's top youth players. The case has played out amid heightened awareness of sexual abuse in sports triggered by the arrest of disgraced gymnastics doctor Larry Nassar, who is serving decades in prison after hundreds of women and girls accused him of sexually assaulting them under the guise of medical treatment.

Stephen acknowledged that he had a hard drive containing folders named for 400 different boys, each containing explicit photos and videos that he had amassed over the years through his involvement in the program for children ages 9 to 17. Many former Barnstormers have gone on to play college basketball at Division 1 programs.

Some images were of boys undressing and showering, captured by recording devices that Stephen secretly placed in hotel bathrooms. Devices designed to look like a bath towel hook and a smoke detector were used at his home in Monticello, Iowa, and his lake cabin in nearby Delhi.

Stephen also took photos and videos of sleeping boys with their pants pulled down, including recordings of himself touching their genitals with his hands and, in at least one case, his mouth.

One such recording involved a boy who was 11 or 12 and had been given medication by Stephen that made him drowsy beforehand. Stephen would share beds with players during trips in which players competed in American Athletic Union tournaments or attended NBA games.

When they weren't traveling together, Stephen often posed as teenage girls on Facebook and Snapchat and used those profiles to trick boys into giving him explicit images. He would offer to exchange nude videos and photos, telling the boys the types of images to produce. He used software to record live transmissions of the boys without their knowledge, and saved those images as well as their chats.

Prosecutors said the victims' folders included at least one explicit video or photo of each, with some containing many different types. The plea agreement says that Stephen "committed sexual acts and sexual contact" on an unspecified number of boys.

The conduct occurred in 2018 and in "past seasons going back several years," according to the plea agreement, which notes Stephen had been involved with the Barnstormers since 2008.

Stephen had initially offered an innocent explanation of the videos of boys showering, telling investigators they were intended to monitor their physical development and were not sexual in nature.

Stephen's conduct was exposed after his former brother-in-law, Vaughn Ellison, discovered a recording device while remodeling Stephen's home in February. Ellison gave the device to police after seeing that it contained several videos of boys showering in hotels in Lombard, Illinois, and Ankeny, Iowa. Investigators obtained warrants to search Stephen's homes , where they found the hard drive and other devices.

Stephen's attorneys have argued that the evidence should be suppressed because it was based on Ellison's unlawful seizure of a device. A judge rejected that argument earlier this month . The plea agreement allows Stephen to appeal that decision to the 8th Circuit Court of Appeals.

If his conviction stands on appeal, Stephen will face a minimum of 15 years in prison and a maximum of 180 at sentencing, which hasn't been scheduled. He has been in custody since his arrest and will remain jailed pending sentencing.

The agreement notes that the potential sentence he faces will be lengthened due to the number and age of victims, the fact that he engaged in sexual acts and contact with multiple boys, and that he had supervisory control over them.