After shrapnel from the engine smashed a window on the Southwest Airlines flight, passengers pulled a woman back in as the sudden decompression of the cabin pulled her part way through the opening. 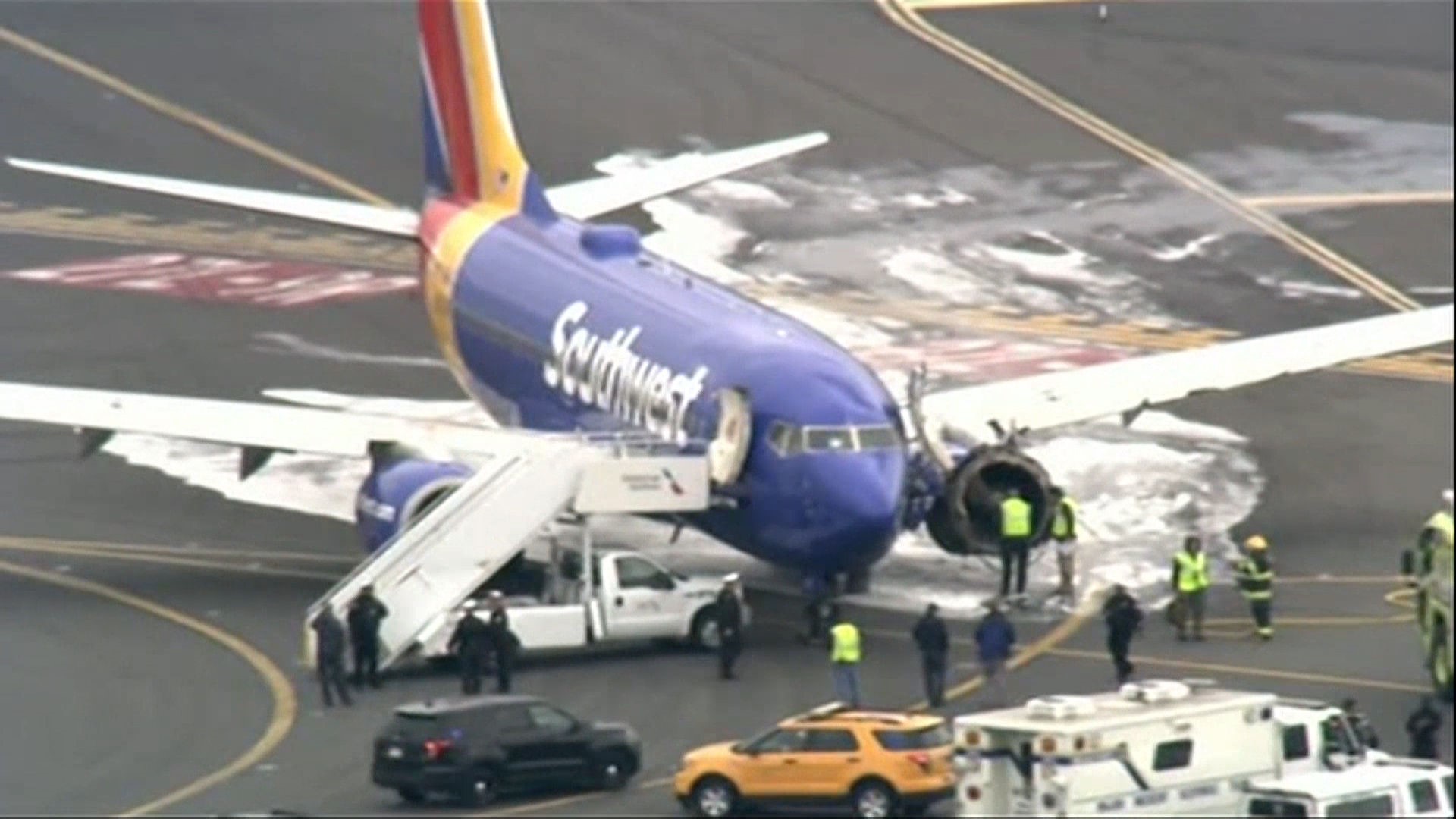 PHILADELPHIA — Shrapnel from a blown jet engine crashed through a window of a Southwest Airlines flight and caused such a perilous drop in air pressure that a passenger suffered fatal injuries after nearly being sucked outside.

Passengers recall a harrowing scene where desperate crew members and others tried to plug the broken window, while also trying to save the mortally wounded woman, identified as a bank executive and mother of two.

The battered jet eventually made an emergency landing in Philadelphia and all other passengers made it off without serious injuries.

Dallas-bound Southwest Airlines Flight 1380 out of New York had 144 passengers and a crew of five onboard, Southwest said in a statement. The plane was met on the tarmac by a phalanx of emergency vehicles that quickly sprayed the area with safety foam and aided the injured.

Jennifer Riordan, a mother of two from Albuquerque, N.M., was identified late Tuesday as the sole victim of the incident, according to the Associated Press.

Riordan, a vice president of community relations for Wells Fargo bank and graduate of the University of New Mexico, was the first passenger death on a U.S. airline since 2009— and the first ever in Southwest Airlines' history.

Credit: Joe Marcus/Twitter
Photo posted on Twitter by Joe Marcus (@joeasaprap) on April 17, 2018 showing what appears to be the damaged engine on a Southwest Airlines airplane with a caption reading: &quot;What a flight! Made it!! Still here!! #southwest #flight1380&quot;

Passengers on board described chaos as the decompression led to her being partially sucked out of the plane. They rushed to try and pull her back inside but her injuries were too grave.

Seven others were injured in the incident. Tracking data from FlightAware.com showed Flight 1380 was heading west over Pennsylvania at about 32,200 feet and traveling 500 mph when it abruptly turned toward Philadelphia.

Amanda Bourman, of New York, was asleep on the plane when she heard a sudden noise and the oxygen masks dropped.

“Everybody was crying and upset,” she told the AP. “You had a few passengers that were very strong, and they kept yelling to people, you know, ‘It’s OK! We’re going to do this!’”

Another passenger, Marty Martinez, posted a brief Facebook Live video showing him donning his oxygen mask. "Something is wrong with our plane!," he wrote. "It appears we are going down! Emergency landing!! Southwest flight from NYC to Dallas!!"

NTSB Chairman Robert Sumwalt said the plane engine would be closely examined to determine what caused the tragedy.

Southwest said the Boeing 737-700 left New York's LaGuardia Airport shortly after 10:30 a.m. ET, bound for Dallas Love Field. The airport said the plane had landed "safely" and that passengers were being brought into the terminal. 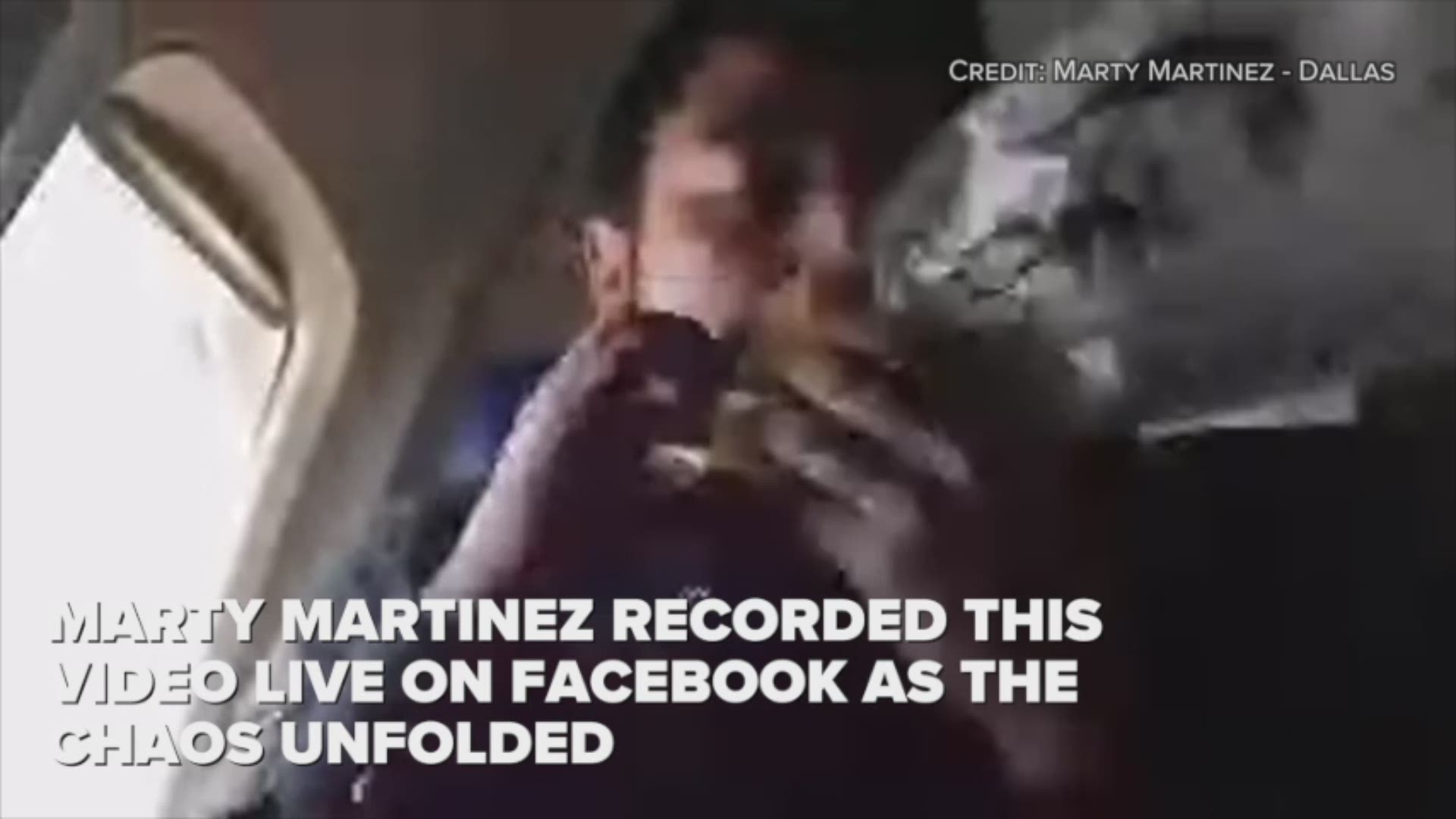 Thiel said a small fire was found in one engine and fuel was leaking. At least one window and the fuselage were also damaged, officials said. AP also reported that the twin-engine 737 apparently blew an engine at 30,000 feet and got hit by shrapnel that smashed a window.

Bourman said passengers were told to brace for impact, but the pilot was able to land.

Gary Kelly, Southwest's chief executive officer, commended the flight crew for safely landing the plane but said the company and the NTSB were in the early stages of investigating exactly what led to the incident.

"This is a sad day and on behalf of the entire Southwest family, I want to extend my deepest sympathies for the family and loved ones of our deceased customer," Kelly said. "Truly, this is a tragic loss."

“Let me assure you the safety of our customers and crew is our uncompromising priority," he said.

Southwest flies Boeing 737 aircraft exclusively, with a fleet of about 700 planes.

“It is a very, very reliable engine,” Kelly said. “The airplane in my opinion is proven. It’s very reliable. It has the greatest success of any aircraft type over a long, long period of time. It doesn’t create any doubt in my mind, at least at this point.”

The plane Tuesday was a 737-700, but the entire fleet has the type of GE engine that failed, Kelly said.

“We are in close contact with the manufacturers,” said Kelly, who said the company is cooperating with investigators from FAA, DOT and NTSB. “At this point, it’s very premature to say what changes we might need to make, if any.”

Kelly has tried to contact the victim’s family, but hadn’t reached them by 6:30 p.m. Eastern.

1 / 10
DOMINICK REUTER/AFP/Getty Images
A Southwest Airlines jet sits on the runway at Philadelphia International Airport after it was forced to land with an engine failure, in Philadelphia, Pennsylvania, on April 17, 2018.

“I reached out to the family and at this point have not made contact,” Kelly said.

The plane was delivered to Southwest in July 2000 and has made about 40,000 flights. The engine last had a major overhaul about 10,000 flights ago, and the plane’s most recent inspection was Sunday, although Kelly couldn’t say what was inspected.

What a flight! Made it!! Still here!! #southwest #flight1380 pic.twitter.com/Cx2mqoXVzY

“There is no information that there were any issues with the airplane or the engines,” Kelly said.

Flights continued to arrive and depart, but the incident led to delays of other flights, the airport said in its statement. The FAA had issued "ground stop" for planes on the ground at other airports waiting to depart Philadelphia. The ground stop was lifted shortly before 2 p.m. 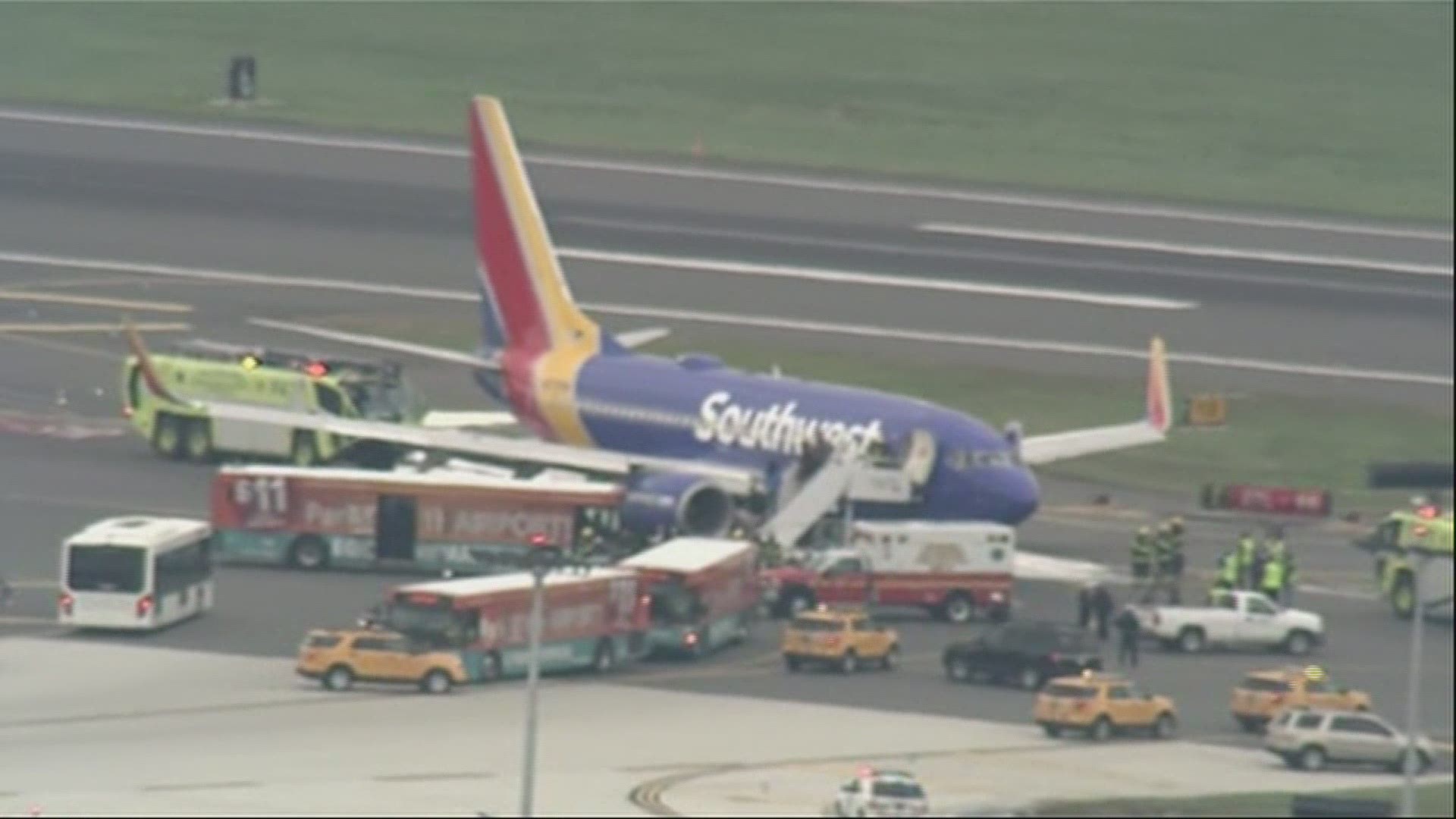