The storm, now downgraded to a tropical depression, had sustained winds of 40 mph and was centered about 75 miles north-northeast of New Orleans Saturday morning.

NEW ORLEANS — Authorities in Alabama say a suspected tornado spurred by then-Tropical Storm Claudette demolished or badly damaged at least 50 homes in a small town just north of the Florida border. Claudette has since been downgraded to a tropical depression.

Sheriff Heath Jackson in Escambia County said a suspected tornado “pretty much leveled” a mobile home park, toppled trees onto houses and ripped the roof off of a high school gym. Most of the damage was done in or near the towns of Brewton and East Brewton, about 48 miles (about 77 kilometers) north of Pensacola, Florida.

“I kind of affected everybody,” Jackson said. “But with those mobile homes being built so close together it can take a toll on them a lot more than it can on houses that are spread apart.”

There were no immediate reports of serious injuries or deaths. Photos of the Brewton area shared on Facebook show toppled trees, including one that landed on a house, as well a long stretch of debris that a local news outlet said was from a badly damaged trailer park.

Damage from the storm was also felt in north Florida, where winds - in some cases reaching 85 mph (137 kph) - caused an 18-wheeler to flip on its side.

The National Hurricane Center declared Claudette organized enough to qualify as a named storm at 4 a.m. Saturday, well after the storm's center of circulation had come ashore southwest of New Orleans. By Saturday afternoon, it was 80 miles (130 kilometers) north-northwest of Mobile, Alabama, with sustained winds of 40 mph (65 kph). It was moving north-northeast at 14 mph (22 kph). Most of the heavy weather was happening far to the north and east of the center.

Early Saturday, the storm dumped flooding rains north of Lake Pontchartrain in Louisiana and along the Mississippi coast, inundating streets and, in some areas, pushing water into homes. Later, the storm was drenching the Florida panhandle and, well inland, a broad expanse of Alabama. The National Weather Service warned of possible tornadoes in north Florida and south Alabama.

Parts of inland Mississippi and Georgia were getting heavy rain from Claudette as well. And even though the storm was weakening, the National Hurricane Center issued a tropical storm watch for parts of the North Carolina coast, which could feel the effects by Sunday night. The storm was forecast to cross into the Atlantic Ocean on Monday, and regain tropical storm strength over open water Tuesday. 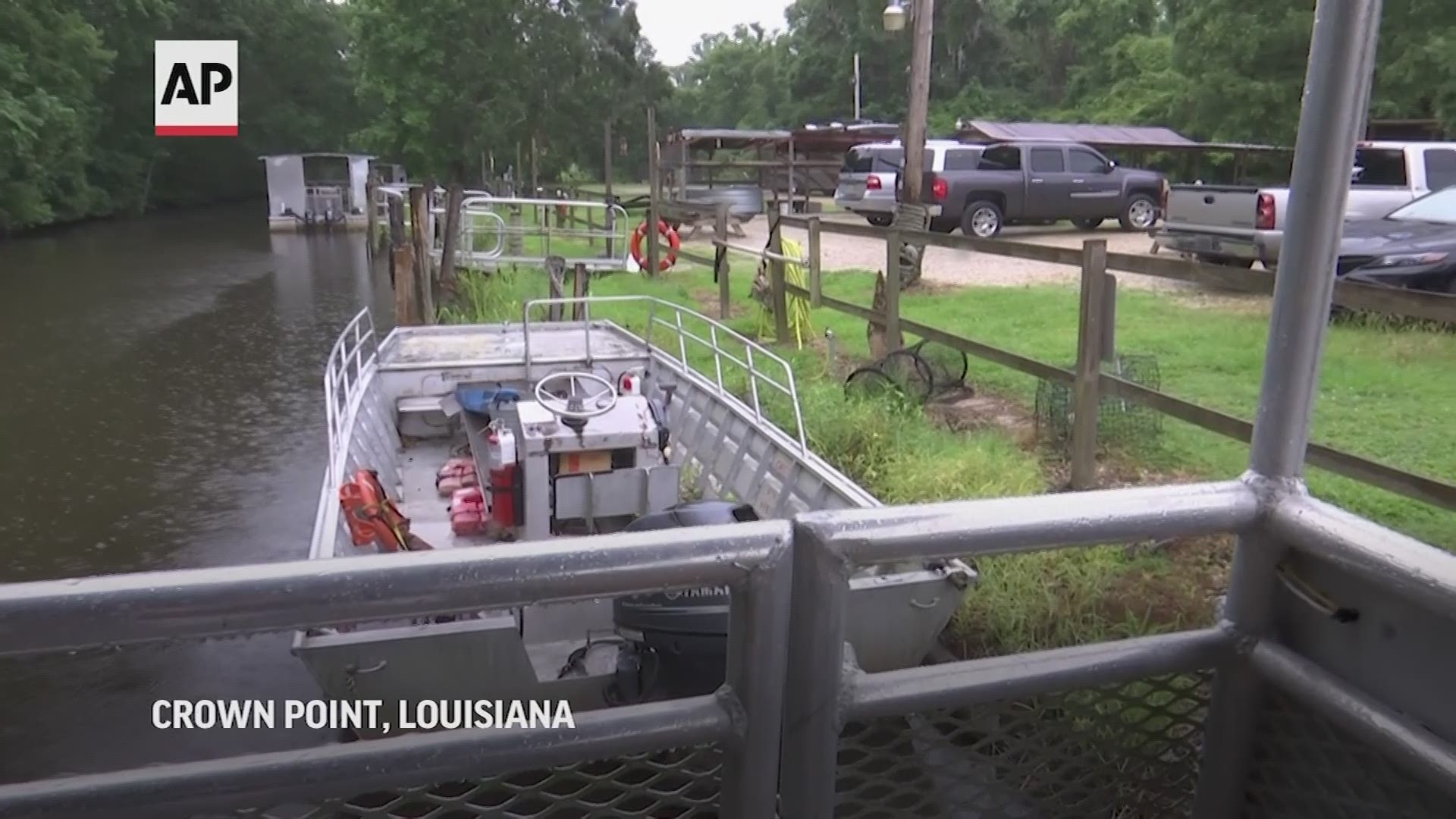 Residents of Pace, Florida, called 911 to report a possible twister that tore the roofs off two homes and damaged at least three others.

An 18-wheeler hit several utility poles and flipped on its side during the storm early Saturday. Debris from the accident, including a collapsed utility pole, turned into projectiles and struck a passing SUV, according to the Florida Highway Patrol.

The accident report said wind gusts of 85 mph were clocked in the area. Highway Patrol officials were to close both lanes of the Interstate 10 bridge between Escambia and Santa Rosa counties due to high winds.

The county received two calls about trees falling onto homes, but no one was home at the time.

The storm left tens of thousands without power and some flights were being canceled or delayed at Pensacola International Airport.

“We have a lot of visitors that are here vacationing,” she said. “Red flags flying out at the beaches so there’s absolutely no swimming.”

Forecasters said Claudette could dump 5 to 10 inches (12 to 25 centimeters) of rain in the region, with isolated accumulations of 15 inches (38 centimeters) possible.

Residents of Slidell, Louisiana, north of Lake Pontchartrain, reported flooded streets and water in some neighborhoods as the storm pushed onshore overnight. Slidell police said the flooding had largely receded by daybreak, after swamping as many as 50 cars and trucks with water.

Most people riding out the storm still had electricity when they woke up Saturday morning. The website poweroutage.us reported roughly 22,000 outages total across Louisiana, Mississippi, Alabama and Florida.

The storm struck on a weekend when many on the Gulf Coast planned to celebrate Juneteenth and Father’s Day.

Business owners across the Gulf Coast, from restaurateurs to swamp boat operators, had anticipated an influx of tourist cash after a year of lost revenue due to the coronavirus pandemic.

“My biggest concern is that it drives away a busy weekend, and may just end up being a lot of rain,” Austin Sumrall, the owner and chef at the White Pillars Restaurant and Lounge in Biloxi, Mississippi, said Friday.

He had 170 reservations on his books for Sunday, but was concerned some patrons would cancel.

“We saw, especially last year, the rug can get jerked out from under you pretty quickly,” he said.

In Louisiana, the threat came a month after spring storms and flooding that were blamed for five deaths, and as parts of the state continued a slow recovery from a brutal 2020 hurricane season.

Separately, Tropical Storm Dolores made landfall on Mexico’s west coast with near-hurricane force. The storm’s center was located about 50 miles (75 kilometers) southeast of Manzanillo, Mexico, a city of about 160,000 people. Its maximum sustained winds were clocked at 70 mph (110 kph), and it was moving north-northwest at 13 mph (20 kph).

Heavy rainfall of six to 10 inches (about 15 to 25 centimeters) was expected across the southwest and western coastal areas of Mexico throughout the weekend. Forecasters were warning of the potential for flash flooding and mudslides.