Pelosi: No State of the Union in the House until shutdown ends

Pelosi acted just hours after Trump notified her that he was planning to deliver the speech next Tuesday in line with her original invitation. 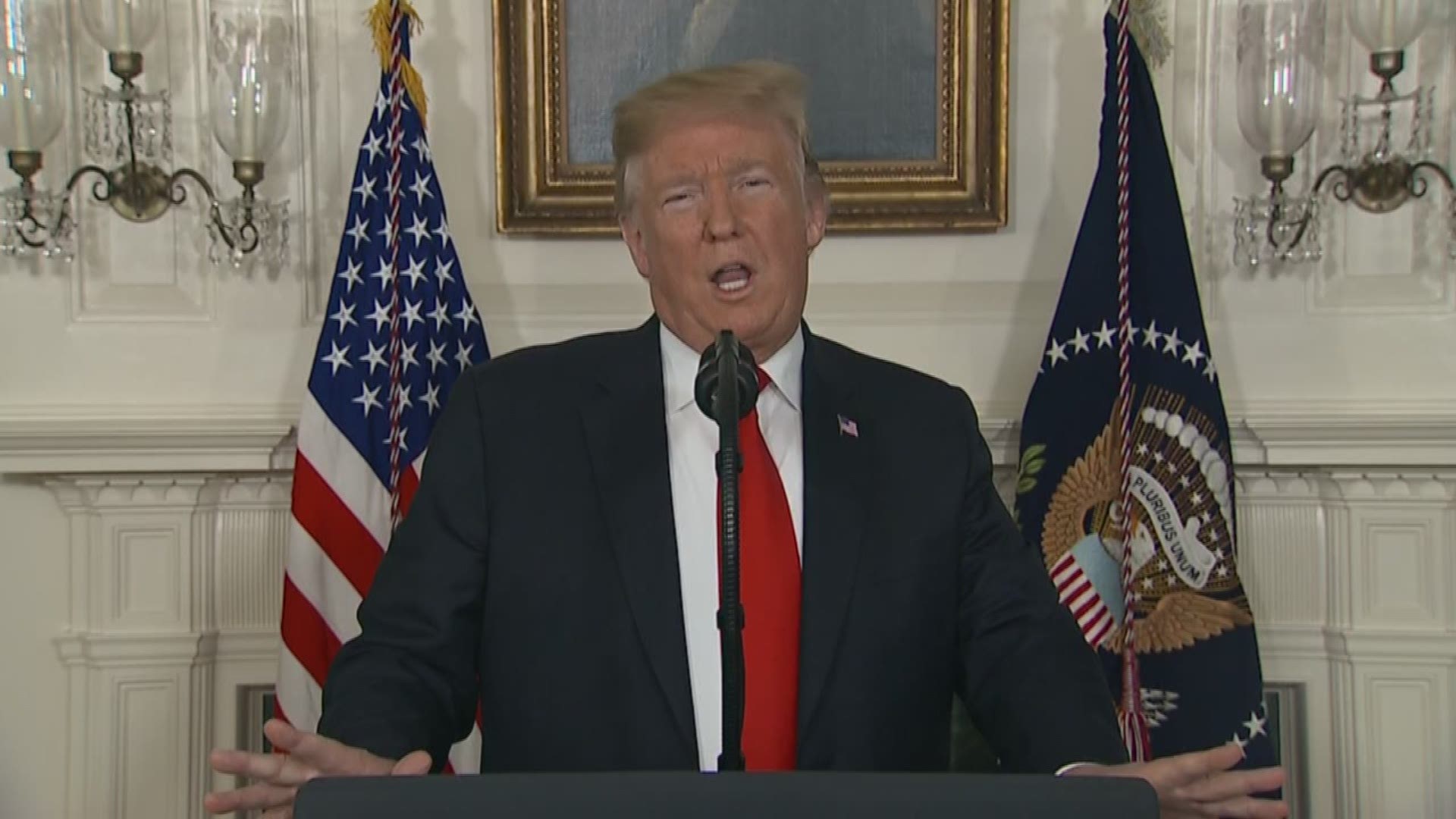 The California Democrat told Trump in a letter Wednesday the Democratic-controlled House won't pass the required measure for him to give the nationally televised speech from the House floor.

Pelosi acted just hours after Trump notified her that he was planning to deliver the speech next Tuesday in line with her original invitation.

Pelosi's moves have left the White House scrambling to devise an alternative plan for the speech, which is one of the president's top opportunities to lay out his agenda to the public.

Pelosi said "I look forward to welcoming you to the House on a mutually agreeable date for this address when government has been opened."

President Trump says he is not surprised about Pelosi officially postponing his address saying Democrats have become "radicalized" and "don't want to see crime stopped, which we could very easily do on the southern border."

Trump was asked about Pelosi's action during a health care event at the White House and as the government shutdown extended into a second month.

The president said: "This will go on for a while. Ultimately the American people will have their way because they want to see no crime."

He also said in the Cabinet room to a group of reporters that the State of the Union address was cancelled because was Pelosi supposedly didn't want to hear the truth.

"Now Nancy Pelosi, or Nancy as I call her," he said. "She doesn't want to know the truth. I think that's a great blotch on the great country we all love."

He continued to say that he'll bee looking at alternatives for the address.

Last week, Pelosi sent a letter to Trump suggesting that he either deliver the speech in writing or postpone it until after the partial government shutdown is resolved, citing security concerns.

But in his response on Wednesday, Trump said there were no security concerns and emphasized that it is his "Constitutional duty" to deliver the speech as scheduled on Jan. 29.

"It would be so very sad for our Country if the State of the Union were not delivered on time, on schedule, and very importantly, on location!" said Trump in the letter.

The president said the address would happen in the chamber of the House of Representatives.

The move is the latest in a game of political brinkmanship between Trump and the House speaker as they remain locked in an increasingly personal standoff over Trump's demand for border wall funding that has forced a partial government shutdown that is now in its second month.

The maneuvering began last week when Pelosi sent a letter to Trump suggesting that he either deliver the speech in writing or postpone it. But the White House maintained Pelosi never formally rescinded her invitation, and is, in essence, calling her bluff.

House Minority Leader Kevin McCarthy, a Republican, previously said the address should be "in the House chamber as we have always done. This is not the time to play politics."

Trump emphasized in his Wednesday letter that the address would happen in the House chamber, but earlier in the day, the White House was continuing to work on contingency plans to give Trump a backup in case the joint-session plans fall through. The president cannot speak in front of a joint session of Congress without both chambers' explicit permission. A resolution needs to be agreed to by both chambers specifying the date and time for receiving an address from the president.

It wasn't immediately clear if Pelosi and House Democrats would approve of hosting the State of the Union in the House chamber.

Officials have been considering a list of potential alternative venues, including a rally-style event, an Oval office address— as Pelosi previously suggested — a speech before the Senate chamber, and even a return visit to the U.S.-Mexico border as Trump is expected to continue to hammer the need for a barrier, according to two others familiar with the discussions.

The Constitution states only that the president "shall from time to time give to the Congress Information of the State of the Union," meaning the president can speak anywhere he chooses or give his update in writing. But a joint address in the House chamber, in front of lawmakers from both parties, the Supreme Court justices and invited guests, provides the kind of grand backdrop that is hard to mimic and that this president, especially, enjoys.

Trump called Moore Monday evening, according to his office, and spoke by phone with Chatfield Tuesday morning, Chatfield tweeted.

"I understand you have other plans for #SOTU, but as we discussed, I look forward to hosting you in Michigan again soon," Chatfield wrote.