Lawmakers emphasized the bill is still in its early stages, and they want to hear what people think about it. 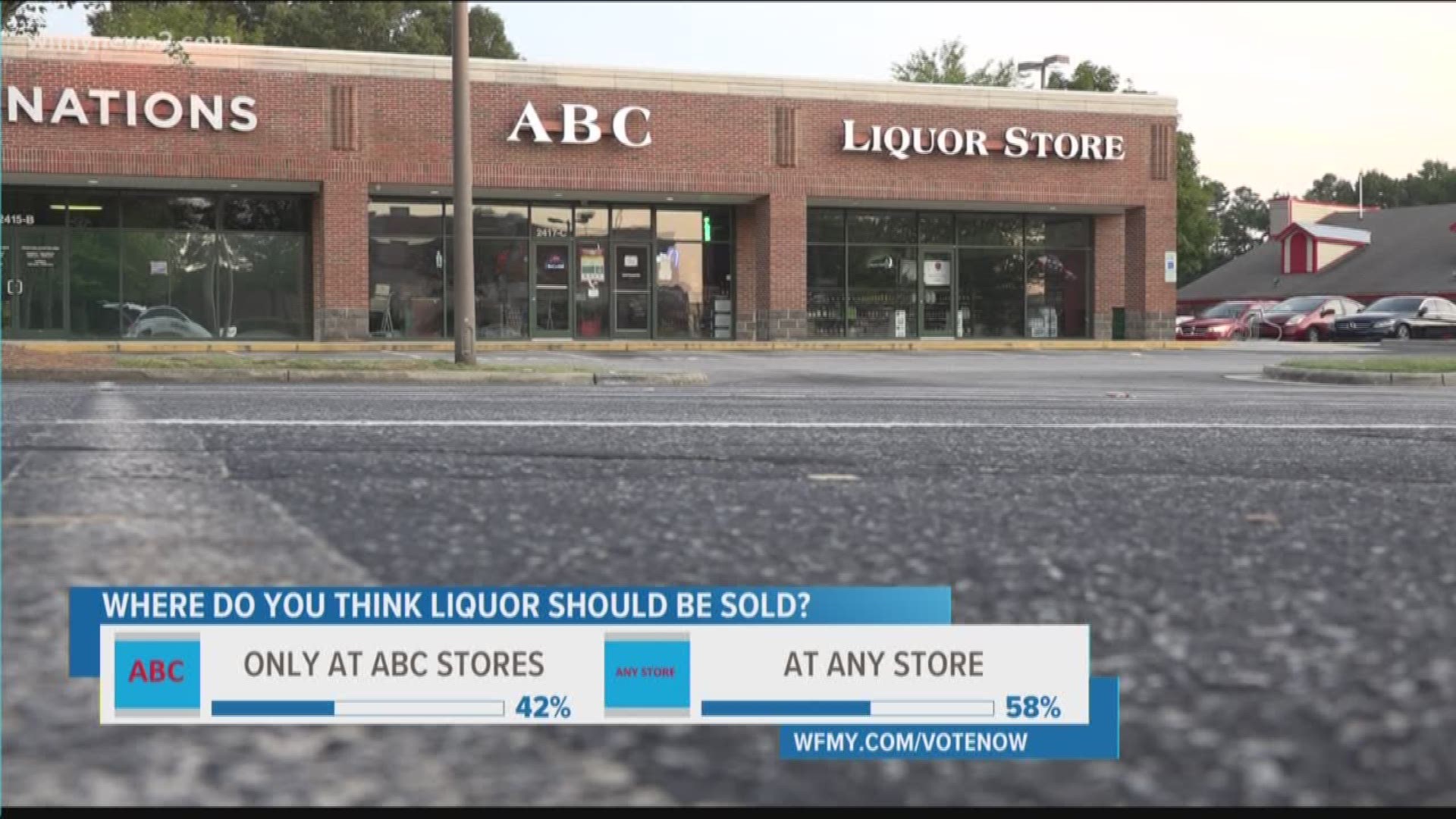 RALEIGH, N.C. — This week, lawmakers unveiled the latest version of a bill that would overhaul North Carolina's liquor sales. Big changes include replacing government-run ABC stores with privatized stores, permitting liquor sales at retail stores, and allowing liquor to be sold on Sundays if cities or counties vote to allow it.

House Bill 971, called "Modern Licensure Model for Alcohol Control," was first filed April 2019 and the latest version was released July 22. On Tuesday, an ABC committee discussed the new bill for about two hours, but no decisions were made.

WFMY News 2 spoke with Harrison and Hardister on Sunday about the new bill. They both stressed that the bill is still in its early stages and likely will not become finalized for at least another two years.

"There are a lot of 100-year-old rules in our books relating to alcohol sales that probably need a revisit," said Harrison.

"We need to modernize our system. I don't see any reason why the government should own and operate ABC stores. I think it's service best left to the private sector," said Hardister. "It's something most other states have done. Really I think our laws in North Carolina are outdated."

Could liquor be sold at retail stores and gas stations?

Yes, but with a few caveats.

The bill would scrap government-run ABC Stores where people must currently go to buy spirituous liquor for consumption off-premises. Instead the state would issue permits to privatized liquor stores and retail businesses, including stores like Walmart, grocery stores, and gas stations.

"The biggest change would be that we're looking to move to a private ABC system. Currently our ABC system is government-owned. What we are seeking to do is change that to a licensing model. Which is something many other states have done," said Harrison.

Hardister said the state could move to place a cap on the number of retail stores allowed to sell liquor.

Liquor stores would have to be at least 500 yards from each other, according to the current version of the bill. However, a business already holding malt or wine permits before July 2020, and also gets more than 50% of its sales from alcohol, would be allowed to get a liquor license no matter where it is located.

"I have heard concerns from some of my colleagues who are worried about retail outlets on every corner in certain neighborhoods. And I would hope that whatever structure we put in place would prohibit something like that happening, because that's certainly not our intent," said Harrison.

Would you be able to buy liquor on Sunday?

The new bill would allow liquor sales after 10 a.m. on Sundays, if counties or cities vote to allow it, effective July 2021.

"That would most likely be a local option where cities and counties could decide whether or not they want to allow liquor sales on Sunday," said Hardister.

Representative Harrison said privatizing liquor sales would most likely cause liquor prices to go down for consumers.

"That's the ways it's worked in other states, because there will be competition. And what's kept prices somewhat higher than our surrounding states is that we have a government-run monopoly on liquor sales," said Harrison.

Harrison said some people travel out of state currently to avoid paying higher prices on liquor.

"I understand that people near the South Carolina border near Charlotte make a liquor run all the time buy cheaper distilled spirits in South Carolina," said Harrison.

A Feb. 2019 report by the Program Evaluation Division of the North Carolina General Assembly concluded that consumer prices would decrease by an estimated 1.3% with a private retail option and increase under a licensure model by about 16%.

"Prices increase under the licensure option because private wholesalers must add a markup in order to profit from liquor distribution," report authors wrote.

As far as earnings from liquor sales befitting local governments, "The funding that currently goes to the counties and local governments will remain the same, it will just come from a different channel," said Harrison.

What happens to the ABC stores?

In Greensboro, there are 16 ABC Stores.

The current bill states that between July 2021 and January 2022, local ABC boards will stop operating and sell all their assets, including liquor, to the highest qualified bidder at a public sale. The money would go to the county's general fund.

"The legislation anticipates them liquidating their inventory," said Harrison.

Why are lawmakers pushing to change the ABC system in NC now?

Hardister and Harrison said the push to "modernize" the sale of liquor in North Carolina has been a long time coming.

"The issue about privatizing the ABC system has been around since I was first elected 15 years ago," said Harrison. "I gave a good look at a lot of our ABC rules. Many of them are anachronistic. They date back to the prohibition era. And there was a lot of modernizing that we needed to do. And deregulation, taking the handcuffs off of entrepreneurial businesses which craft brewers and craft distillers have turned into a big part of North Carolina's economy."

Harrison said she became involved in revamping liquor sales in North Carolina after working with craft breweries and distilleries. She wants to remove regulation to allow distilleries to thrive.

"I've been working on the craft brewery issue and watched how after we passed the legislation that allowed higher alcohol content for beers," said Harrison. "I wonder what might happen if we do this for craft distilleries?"

Hardister said many other states have already privatized liquor sales.

When could all of this take effect?

Both Harrison and Hardister emphasized all of the changes in this bill are subject to change and any real change is likely years off.

"It's a pretty dramatic change from the current status quo," said Harrison. "I don't want folks to think this is going to happen next week and the legislation implementation in the next year. I think we are few years out if we do go down this road."

Harrison said the government will likely conduct a study and involve all stakeholders to more fully understand the impacts of the proposed changes.

"In the ABC system, there's been a lot of mismanagement, cost overruns and some changes that need to be made at a minimum at that level," said Harrison.

UPDATE: This article has been updated to include information from a Feb. 2019 report by the Program Evaluation Division of the North Carolina General Assembly.