Newly obtained texts provide both a more specific timeline about their relationship as well as details that describe intimate encounters. 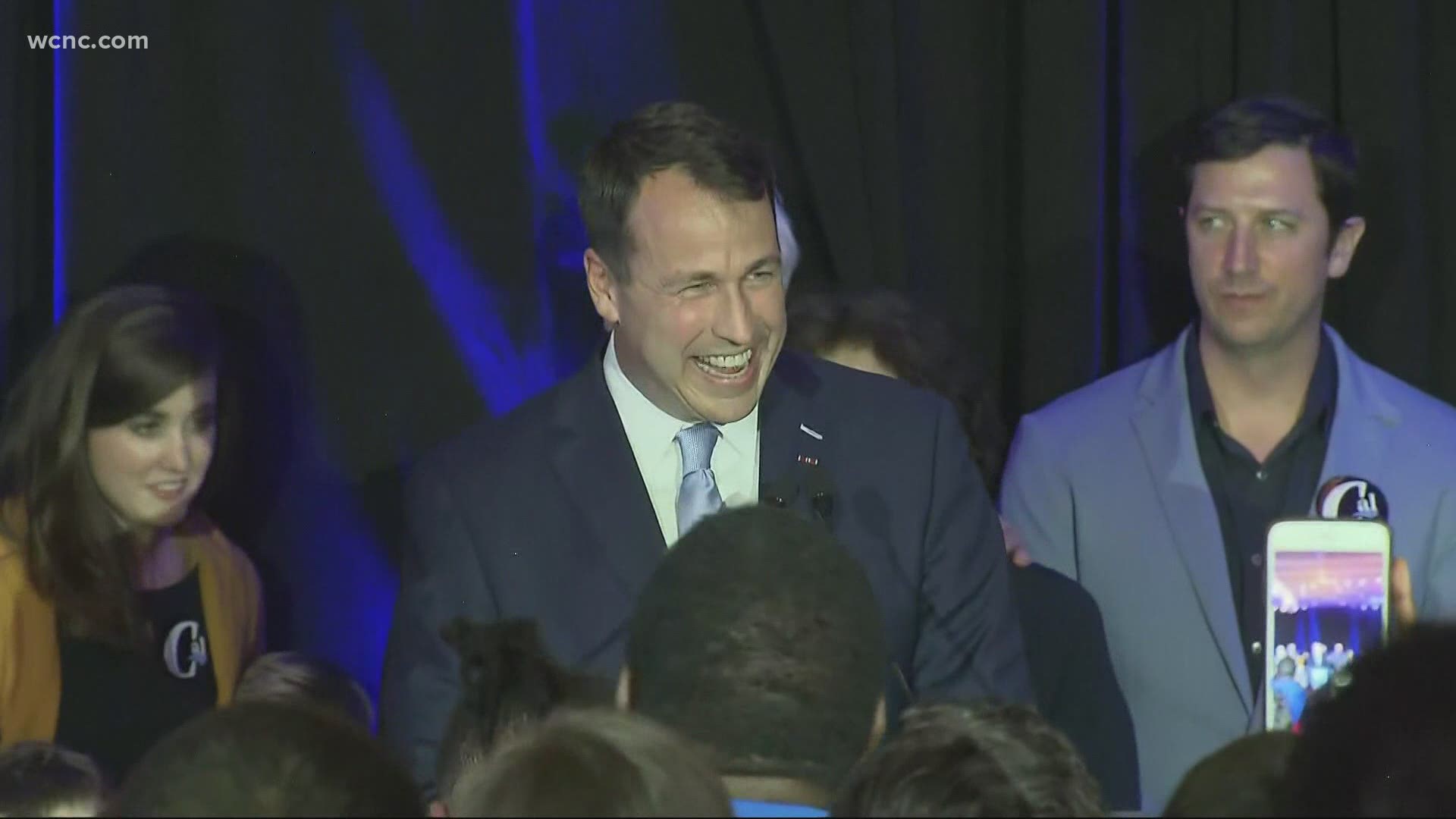 RALEIGH, N.C. — A race in North Carolina critical to control of the U.S. Senate has been thrown into turmoil over allegations of personal misconduct by Democrat Cal Cunningham, a married man who had an extramarital relationship with a consultant.

Previously undisclosed text messages obtained by The Associated Press and additional interviews show that the relationship extended beyond suggestive texts to an intimate encounter as recently as July.

Republicans hold a 53-47 majority in the Senate, and the contest between Cunningham and Republican Sen. Thom Tillis has been among the most-watched in the country, with polls showing a tight race and both parties investing heavily in the outcome.

Cunningham's personal indiscretion offers a fresh test of whether voters will punish candidates for their private, consensual activity, and the answer they deliver could determine which party wields power in the Senate.

The chamber has been a bulwark for Republicans under President Donald Trump, with Democrats in control of the House.

An Army Reserve lieutenant colonel with a wholesome appeal, Cunningham was widely viewed as the kind of recruit Democrats needed to make inroads in conservative-leaning Southern states like North Carolina.

Yet the text messages and interviews offer a glimpse that is at odds with the image of a devoted family man.

A week ago, a conservative website, NationalFile.com, published text messages between Cunningham and Arlene Guzman Todd, a public relations strategist from California, that suggested a personal relationship.

The newly obtained texts provide both a more specific timeline about their relationship, which shows it was recent, as well as details that describe intimate encounters — not simply a digital exchange.

.@RachelNPetri will we be getting a statement regarding this reporting? @CalforNC and campaign have been mute for days. @wcnc https://t.co/TwGbUevEDp

The text messages were not obtained from Guzman Todd. But the AP contacted her to confirm their authenticity.

In a series of interviews late Monday as well as in the text messages, Guzman Todd described two in-person encounters with Cunningham, one in March in Los Angeles that she said did not include intimate contact and a second in July in North Carolina, where she said they were intimate.

In the text messages to her friend, Guzman Todd told her she was intimate with Cunningham in his home, which she later characterized as "weird."

In another exchange, Guzman Todd indicated that she was frustrated by the limited attention that he showed her.

"I'm just going to send to his opponent his naked photos," Guzman Todd wrote. "That will teach him."

"You don't deserve me Cal," she said in a separate text message. She added in another, "He knows (that I) can tank his campaign."

In a statement, Guzman Todd apologized for the "pain and embarrassment, and disrespect I've caused to my immediate family, loved ones, and everyone affected by this situation."

"A few months back, I displayed a lapse in judgment by engaging in a relationship with Cal Cunningham during a period of marital separation," Guzman Todd said. "The relationship spanned several months and consisted primarily of a series of text exchanges and an in-person encounter." She did not elaborate, but her text messages described the intimacy.

Cunningham's campaign declined to comment on the newly disclosed texts or on Guzman's statement.

The campaign instead pointed to a statement issued on Friday and confirmed the authenticity of those texts at the time.

"I have hurt my family, disappointed my friends, and am deeply sorry. The first step in repairing those relationships is taking complete responsibility, which I do. I ask that my family's privacy be respected in this personal matter," Cunningham, who has two teenage children and has been married for two decades, said at the time.

When WCNC pressed for an updated statement in regards to additional allegations, the Cal Cunningham campaign declined to campaign further but reaffirmed Cunningham would be staying in the race.

Democratic control of the Senate will be vital if Democrat Joe Biden wins the presidency. Without it, he can be assured that the Republican majority will reject his plans to expand health care access, make significant investment in green energy and rewrite the tax code so that wealthy Americans shoulder more of the burden.

Spokeswoman for @CalforNC pointed me in the direction of the same statement he gave Saturday when asking about the latest affair allegations from a second woman. She tells me he will stay in the race.

Cunningham, 47, was a star recruit for Senate Minority Leader Chuck Schumer. He's been a fundraising powerhouse. He also checks important boxes: He's a veteran, a father, a lieutenant colonel in the Army Reserve, a lawyer and a former state senator.

In recent years, he worked for the environmental services company WasteZero. And he's had an aw-shucks style that matched effectively against Tillis and could be compelling to critical independent voters.

"He had this clean-cut image with a great story, a great background, an impeccable record of service," said Brad Crone, a longtime state Democratic consultant. "He was straight out of central casting."

Tillis has seized on the revelations, arguing that Cunningham "owes the people of North Carolina a full explanation" for his extramarital activity. But he may be ill positioned to force the issue after disclosing hours before the text messages were made public that he has contracted the coronavirus.

"On the debate stage last week Cal said it's about integrity -- and I agree," Tillis said on "Fox & Friends."

Cunningham's campaign responded to the tweet and its message: “Senator Tillis and his allies are trying to exploit a personal matter and ignoring a family’s request for privacy to make desperate attacks in hopes they can distract from Senator Tillis’ record of blocking Medicaid expansion, voting to take protections away from North Carolinians with pre-existing conditions, and failing to pass needed COVID-19 relief for our communities.”

Both candidates are now on the sidelines. Tillis is self-isolating at his home, and his Charlotte campaign office is closed for the rest of the week. Cunningham pulled out of a previously planned online forum on Monday with the Libertarian candidate in the race. His campaign gave no reason for his decision.

Despite the developments, some state Democrats sought to keep supporting Cunningham for the seat, saying he's still right on the issues important to the party faithful and the country.

"Cunningham had a critical lapse in judgement and morality. My prayers go out to his family as they work through healing," tweeted North Carolina state Sen. Erica Smith, who lost to Cunningham in the March Democratic primary. "I ask our supporters to unite around our platform and stand with Cal for NC."

But Chris Cooper, a political science professor at Western Carolina University, said Trump's history isn't already baked into how people feel about Cunningham. Cooper said how much the revelations will damage Cunningham's campaign depends on whether additional details surfaced beyond the texts.

"It was a character-first campaign, and it was as much about who Cal Cunningham is than what Cal Cunningham stands for — and that's a harder sell today than it was last week," Cooper said Tuesday.