If you are standing in line about to cast your ballot, it is tempting to want to take a selfie. In North Carolina, don't do it. 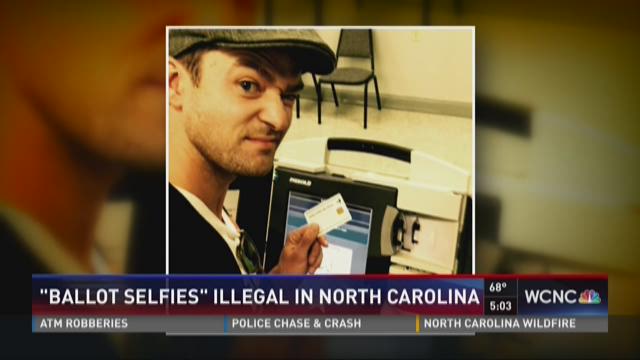 CHARLOTTE, N.C. -- If you are standing in line about to cast your ballot, it is tempting to want to take a selfie. In North Carolina, don't do it.

North Carolina is one of 26 states that bans photography at polling places. It also prohibits people from taking pictures of their ballots.

Under the state law, cellphone and camera use is restricted within 50 feet of the voting areas.

Dickerson says it is permissible to use the notes section of your phone to refer to guides you may have given yourself for candidate selection.

Violations of the law are punishable with jail time or a fine.

Dickerson says he is not familiar with anyone ever being jailed for violating the photography law.

However, he says, a fine for a photo is bad enough.

"Christmas is coming," Dickerson says. "I don't want to lose any money."

The state statute does not specify an exact amount a violator could be fined.

Dickerson encourages people to take a selfie outside of the polling place with the 'I voted' stickers instead of attempting them with the ballot or the electronic voting stations.