The president has indicated he wants to be able to fully fill an arena for the Republican National Convention. 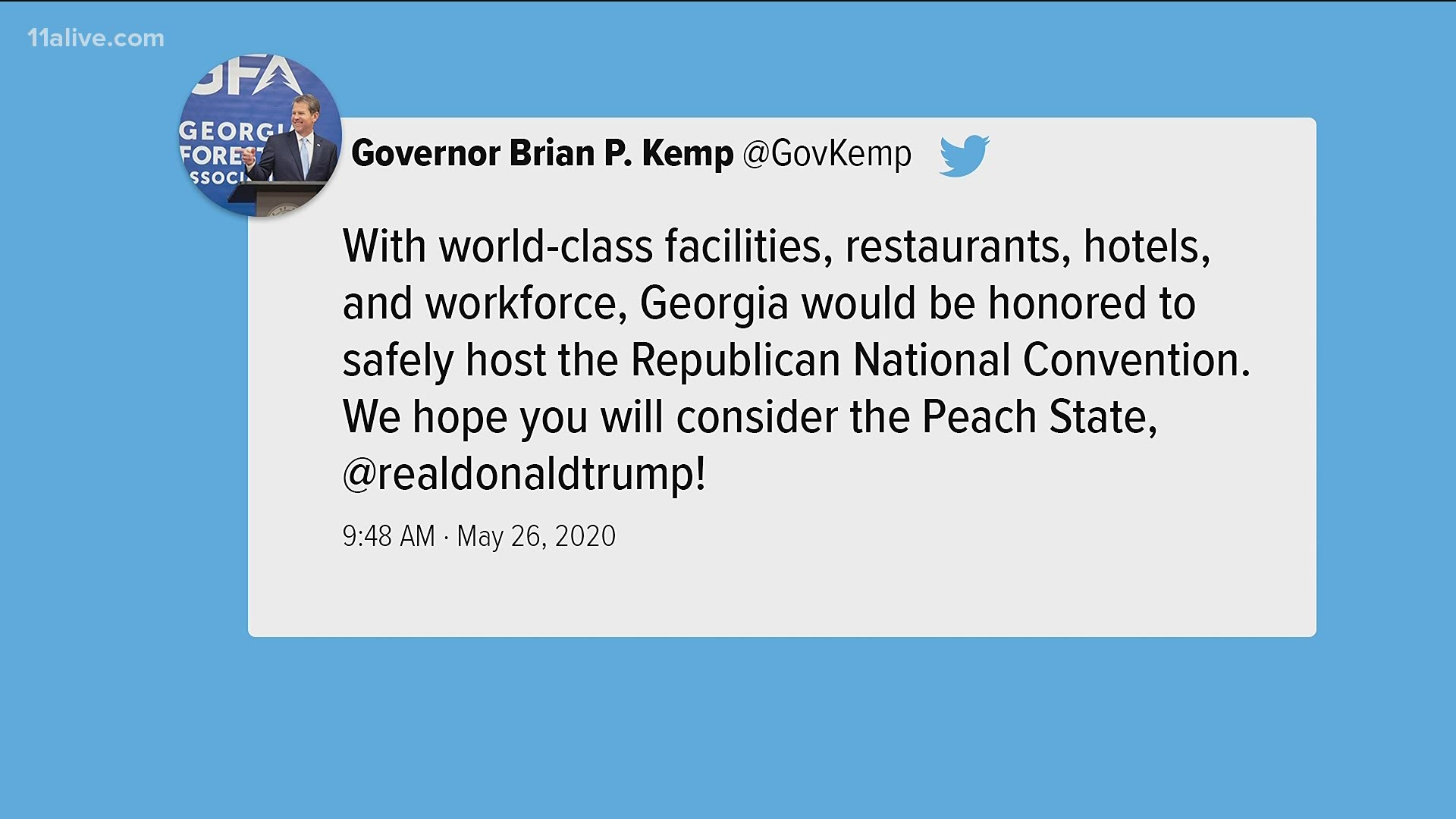 ATLANTA — Gov. Brian Kemp on Tuesday offered up Georgia as an alternative to North Carolina to host the Republican National Convention, after President Trump suggested on Twitter the previous day that it could be moved from Charlotte.

The president indicated he wanted to be able to fully fill an arena for the convention, something he said North Carolina's Democratic governor, Roy Cooper, has not promised he will allow.

"Democrat Governor, @RoyCooperNC is still in Shutdown mood & unable to guarantee that by August we will be allowed full attendance in the Arena," Trump wrote. "In other words, we would be spending  millions of dollars building the Arena to a very high standard without even knowing if the Democrat Governor would allow the Republican Party to fully occupy the space."

He added that, without a guarantee that the full space will be available, "we will be reluctantly forced to find, with all of the jobs and economic development it brings, another Republican National Convention site."

On Tuesday, Kemp implied such an accommodation could be made in Georgia.

"With world-class facilities, restaurants, hotels, and workforce, Georgia would be honored to safely host the Republican National Convention," the governor tweeted. "We hope you will consider the Peach State, @realdonaldtrump!"

He did not specify where Georgia would, in theory, host the convention, though Atlanta would have the most capacity for such an event. Atlanta Mayor Keisha Lance Bottoms has been a vocal opponent of reopening.

"Like North Carolina, the City of Atlanta is following a phased, data-driven approach to reopening. That plan does not contemplate hosting a large gathering event in August," the mayor said in a statement. "In fact, several long-standing City-supported and sponsored events have already been canceled in order to comply with CDC guidelines."

In a statement, the Georgia Republican Party endorsed the idea.

“Under Governor Kemp, Georgia has led the nation in safely reopening its economy," David Shafer, the Georgia GOP chairman, said. "We have first class facilities, a skilled workforce and a reputation for hospitality second to none. We would be proud to host the Republican National Convention.”

Brian Robinson, former communication director for Gov. Nathan Deal, is now a Republican strategist and president of Robinson Republic. Robinson also sits on the board for the Georgia World Congress Center, which in theory could host some of the events involved with a political convention.

Robinson was excited but reserved when asked about the thought of the 2020 Republican Convention moving to Georgia.

"I don't see them making a change at this juncture, it is very late in the game for that, but if they did Atlanta would be an obvious transition," Robinson said.

An obvious transition, because Georgia is no stranger to the world's largest events having hosted the Olympics, multiple Super Bowls, a recent Democratic debate, and many other large scale events.

The GOP awarded Charlotte the Republican Convention in July of 2018, giving North Carolina more than 2 years to prepare. Georgia would have less than 3 months until the convention.

Robinson said there would be a lot of work ahead for Georgia to prepare. Then there is the political argument. Georgia is a red state, possibly turning purple, with several must-win races for Republicans this fall. The convention could rally Georgia's republican base.

"That is why parties choose where they choose," Robinson said. "That want to go to a place where perhaps they can take a swing state and put it into their column. If Donald Trump gets a boost from having this in Georgia, then the candidates down-ticket could too."

"(Sen.) David Perdue, the republican that emerges in the other Senate race whether (Rep.) Doug Collins or (Sen.) Kelly Loeffler and then the Congressional races in the 6th and 7th districts here in metro Atlanta," he added.

RELATED: Comparing the number of people hospitalized to COVID-19 deaths

Political Science Associate Professor Andra Gillespie of Emory University said everyone is still at the mercy of the COVID-19 pandemic.

"I get the enthusiasm, but that enthusiasm has to be matched with a viable plan before it can go forward," Gillespie said.

Republicans and Democrats for that matter haven't presented a plan for managing the large crowds that come with a convention, both inside the arena and at the events surrounding the convention.

No matter the location of the Republican convention, it remains unclear how large crowds could be safely managed.

"Large states, including Georgia, actually send more delegates than are actually allowed to physically be in a room together according to the CDC's guidelines at this point, so how do we have that accommodation?" Gillespie said.

Gov. Kemp was originally criticized by Trump for allowing businesses such as salons, barbershops, tattoo parlors and bowling alleys to reopen late last month, making Georgia the first state in the nation to take concrete steps to reactivate its economy amidst the ongoing coronavirus pandemic.

Since then, though, all 50 states have started reopening in some form, and last week Vice President Mike Pence visited Atlanta to have lunch with the governor and attend a restaurant industry roundtable.

At that roundtable, Pence hailed Kemp for "leading the way" and making Georgia an "example to the nation."

WHO warns 1st worldwide coronavirus wave not over

Socializing amid COVID-19 | What's the right approach? Here's what you said