The killing of an Iranian military leader is the latest episode in a tense relationship between the U.S. and Iran dating back to the 1950s. 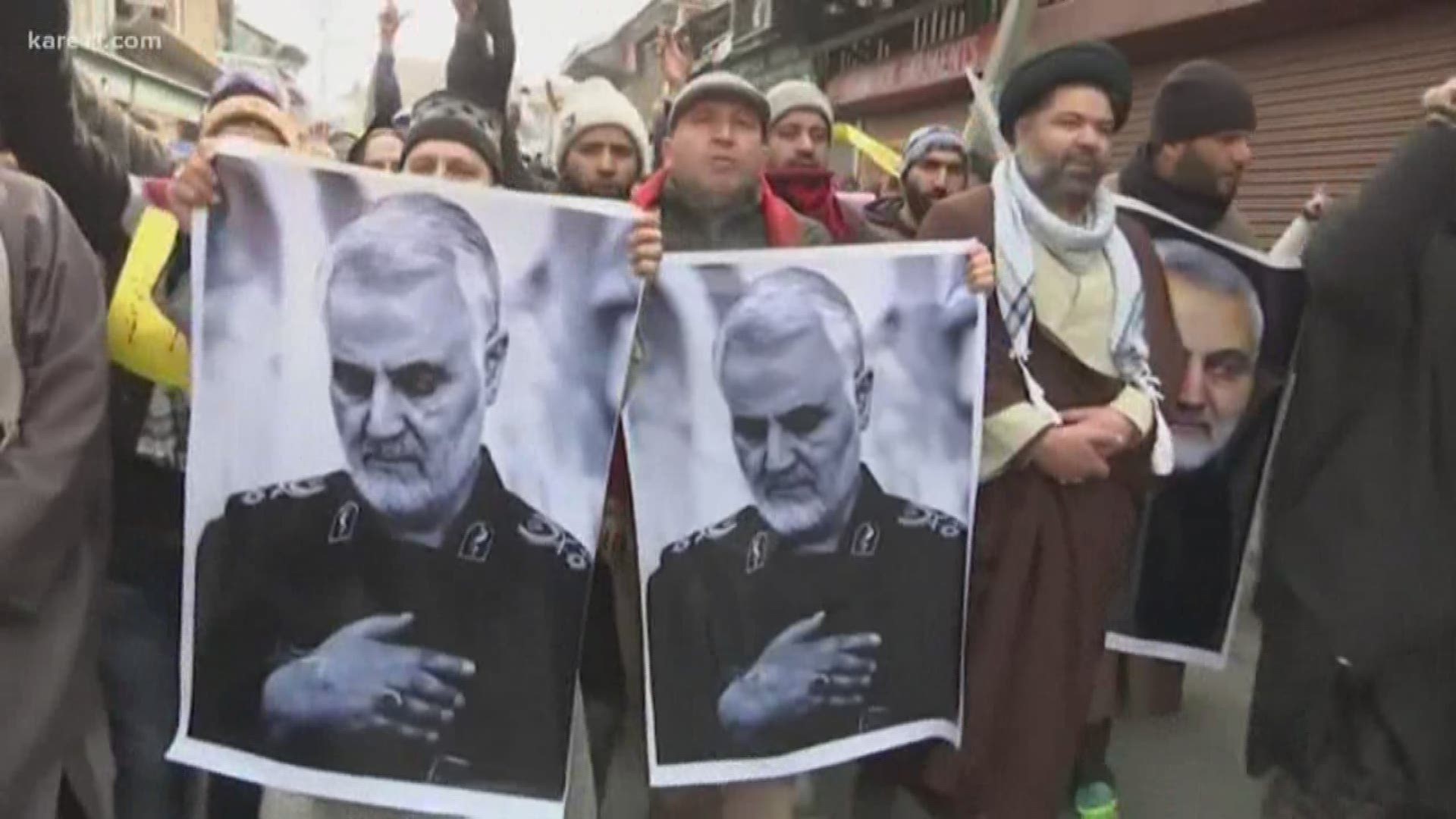 MINNEAPOLIS — On Friday the world waited to see how Iran would respond to the US air strike in Baghdad that targeted and killed Iranian military leader Qasem Soleimani a day earlier.

Protesters flooded the streets of Tehran and other cities denouncing the US and demanding their own government avenge the death of Soleimani, who was the second highest-ranking military official in that nation.

"It’s hard to overstate how important a figure he is in Iran. This is the equivalent of an adversary assassinating, for example, the chairman of the Joint Chiefs of Staff or a major national intelligence figure," University of Minnesota political science professor Mark S. Bell told KARE.

RELATED: President Trump: Killing of Iranian general was meant 'to stop a war'

"In some ways it’s even more significant than that because Soleimani was a much more publicly known, revered figured within Iran than those individuals would be in the United States."

Soleimani is widely seen as the architect of covert and overt operations that have expanded Iran's influence in the region, often to the detriment of the US and its allies. Since 1998 he led the Quds Force of the Islamic Revolutionary Guard Corps, which has been involved in many secret military operations outside of Iran.

And while President Trump drew praise from supporters for the takedown of Soleimani, the move could ignite a wider conflict in the region. At the very least it will likely spark retaliatory actions.

"I think it’s hard to view this as anything other than an act of war and, and certainly that’s how I imagine the Iranians will see this, and it’s how the United States would see it if someone did an equivalent thing to senior US official," Bell remarked.

As an expert in nuclear proliferation, Bell monitored the Iran Nuclear Deal very closely. He said President Trump's decision to scrap that deal ramped up tension between the two nations.

"Since the Trump administration came into office and dismantled the Iran Nuclear Deal, hard-liners in both countries have been empowered and you’re seeing an escalation and a growing mistrust," Bell explained.

The tensions between the countries boiled over in 1979 when protesters stormed the US embassy and held 52 diplomats hostage for 444 days. The captors were demanding the return of Shah Reza Pahlavi, who had been overthrown in the Islamic Revolution but allowed to enter the US for medical treatments.

That simmering anti-American sentiment was rooted in a series of events from the early 1950s. The CIA backed a coup that toppled the democratically-elected leader, Prime Minister Mohammad Mosaddegh.

The Shah, who held a more titular role in Iranian society at the time, was elevated to the role of ruler in exchange for protecting US and British interests. US leaders were worried about containing Soviet influence, while the British were deeply concerned about the prospect of oil refineries being nationalized by the Mosaddegh government.

"That led directly to the 1979 revolution and coming to power of a much more anti-American Iranian regime," Bell said. "The mistrust that has built up over the decades since then can all be traced back to those decisions in the early 1950s."

In the days leading up to the killing of Soleimani the US bombed Iranian-backed militia camps in Iraq in retaliation to a missile attack that killed an American contractor.  Iranian-backed protesters then laid siege to the US Embassy in Iraq, damaging parts of the compound.

But Bell said the killing of Soleimani on Iraqi soil may very well backfire within Iraq, adding pressure for the US to leave that nation. That would only add to Iran's influence there.

"I think you’ll see as increasing calls from within Iraq for the United States to pull out entirely from Iraq. And, indeed, the United States is now advising its citizens within Iraq to evacuate as quickly as possible, which I think is a recognition of the increased threats they now face."

RELATED: Iranian general steps out after Soleimani's death to lead

RELATED: The question now: What's next for the U.S. and Iran? 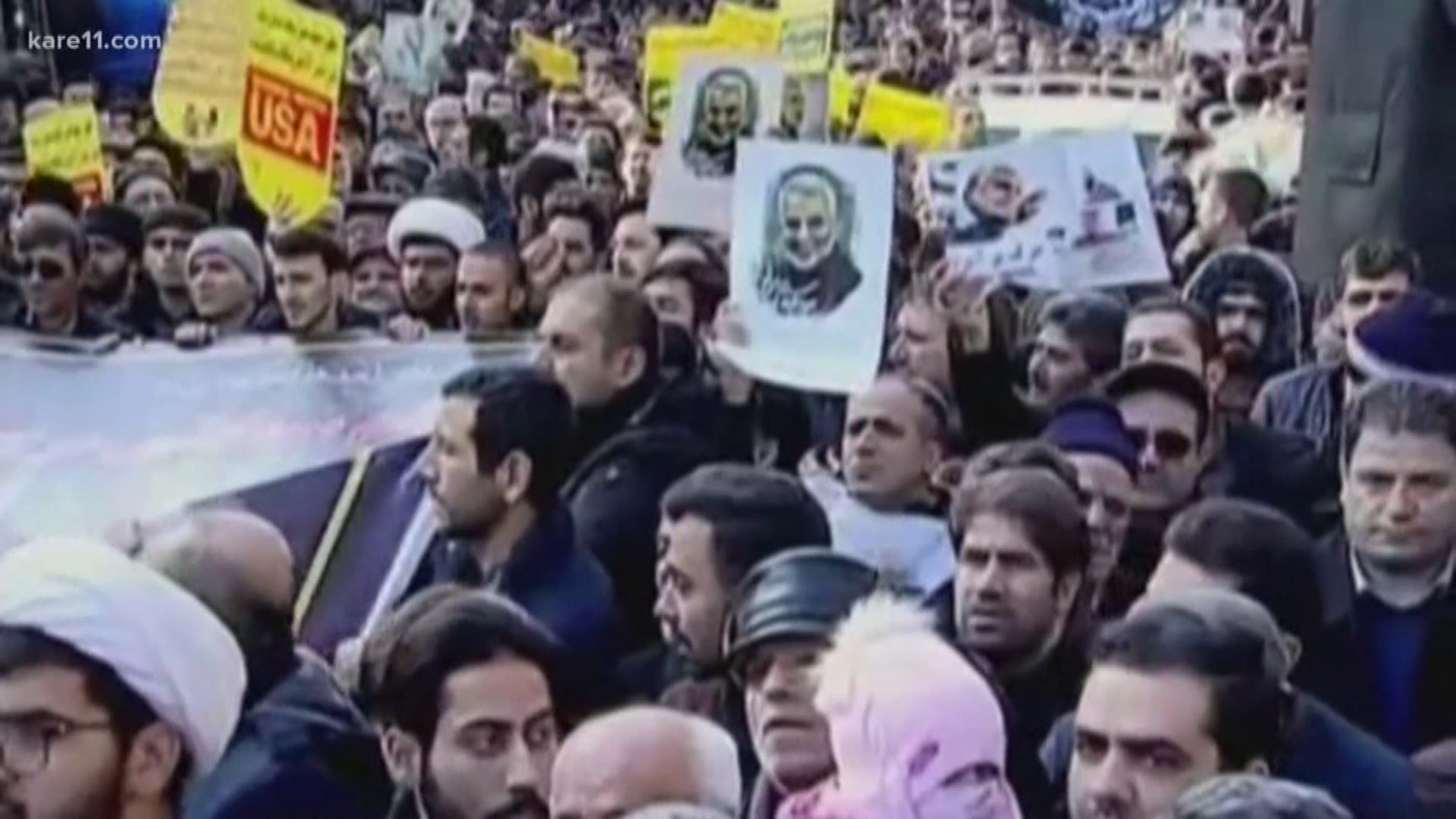