House Bill 370 would have required NC sheriffs to cooperate with Immigration and Customs Enforcement. 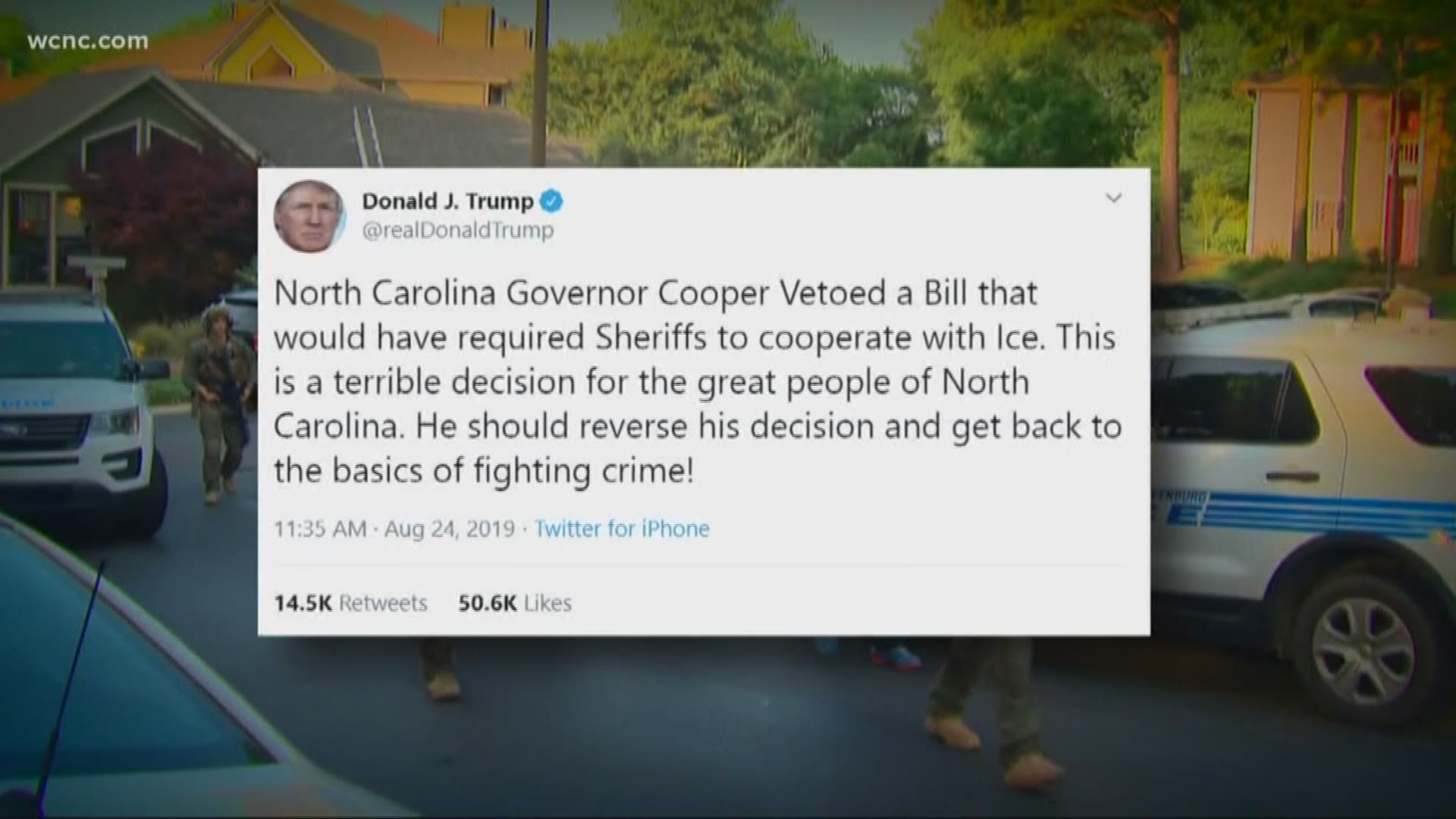 House Bill 370 would have required North Carolina sheriffs to cooperate with U.S. Immigration and Customs Enforcement, which is something Mecklenburg County Sheriff Garry McFadden has notoriously refused to do.

Most recently, ICE agents say Sheriff McFadden put the community in danger by releasing a Honduran national that was facing rape charges.

The president is now urging Governor Cooper to reverse his decision in order to "get back to the basics of fighting crime."

Earlier this week, Sheriff McFadden applauded the veto and said the opposite of the president, that this bill would negatively impact public safety in Mecklenburg County.

Speaker Tim Moore thanked the President for "standing up for the safety of North Carolinians" via a tweet Sunday afternoon. At a press conference earlier this week, he directly called out Sheriff McFadden.

"You look at the situation that happened in Charlotte just last week," Moore previously said. "A person charged with rape, a person who had a history of other violent offenses had an ICE detainer issued but the sheriff ignored that detainer and released this person.”

Moore is referring to 33-year-old Oscar Pacheco-Leonardo who was charged with rape and released on bond. ICE officials say the Sheriff's Office refused to honor a detainer and didn’t tell them he was being released.

It took two months before ICE took him back into custody.

At the time, Sheriff McFadden deflected criticism saying his decision not to honor detainers was not the sole reason Pacheco-Leonardo was released.

"I applaud Governor Cooper on the veto of HB370. The bill is unconstitutional and would steal the authority of all Sheriffs to make those discretionary decisions that all Sheriffs are elected to make on behalf of their constituencies.

HB370 would negatively impact public safety in Mecklenburg and other counties whose citizens provided a clear mandate to end 287(g) and to stop honoring ICE detainers. I continue to believe that this misguided and ill-advised bill would threaten the trust that I have spent a career trying to build between law enforcement and the community, including the immigrant community.

My goal remains to work with all law enforcement agencies, state and federal prosecutors, and the judiciary, to implement plans and programs to keep the community safe. If the legislature overrides the Governor’s veto and HB370 becomes the law, I will, of course, direct the Mecklenburg County Sheriff’s Office to abide by it as we do all laws. But for the people of Mecklenburg County I sincerely hope that day never comes."