But do you know about Charlotte's massive network of tunnels that run underground beneath some of the Queen City's busiest landmarks and highways?

An NBC Charlotte investigation found the tunnels remain accessible to people who want to cause catastrophic damage, nearly seven years after NBC Charlotte first brought the issue to the attention of city leaders. A national safety expert said that vulnerability should concern people daily, not just during major events, such as the NBA All-Star Game or Carolina Panthers games.

"You look at explosives, improvised explosive devices being detonated underneath the city could be catastrophic," former FBI Assistant Director Chris Swecker said. "It's surprising it hasn't been completely secured. It's a known vulnerability."

A tour through Charlotte's underground tunnels

Charlotte's tunnels are meant to prevent flooding by funneling rainwater to creeks and streams, but someone with bad intentions could use them to create another kind of disaster.

And all they'd need to access them are rain boots, a flashlight and a little know-how.

The city has a series of outlets that intentionally let water out and unintentionally allow people to enter. NBC Charlotte's Nate Morabito and photojournalist Ken Shermer entered one of the tunnels near a city park, using the same entryway as NBC Charlotte's crew did in 2012. After about 15 minutes of walking, there were no barricades or preventative measures to stop people from walking through the tunnel. 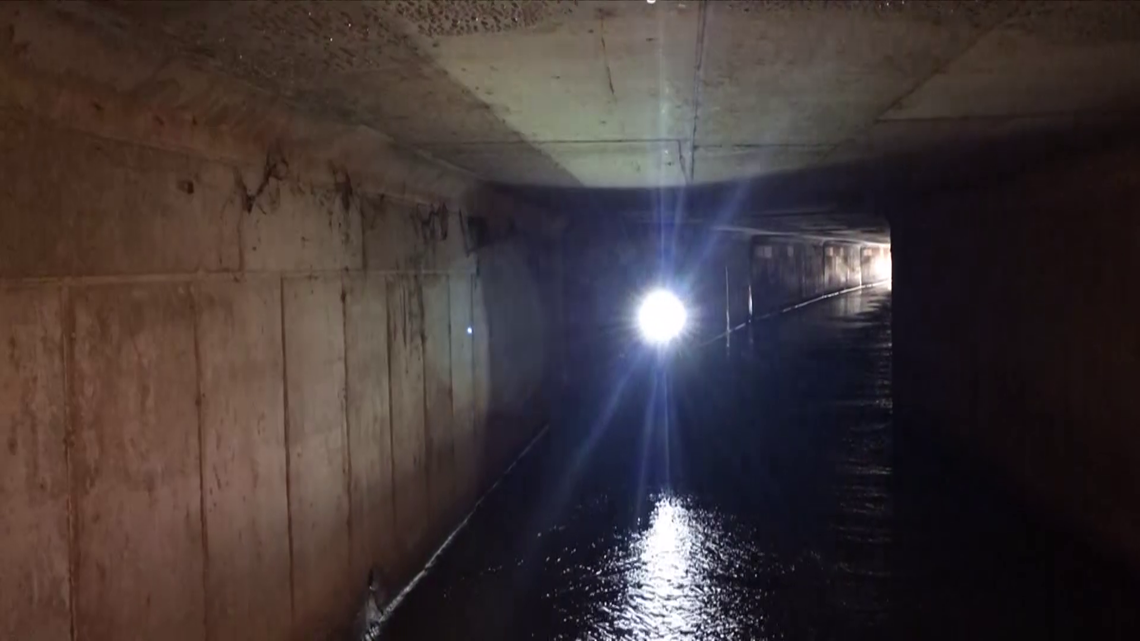 An interactive map that's available to the public lays out where the tunnels go and how they're connected underneath the city. However, NBC Charlotte is not providing a link to that map or directing anyone to it. Any inquiries can be sent to the City of Charlotte.

"It's surprising it hasn't been completely secured, it's a known vulnerability," said Swecker. "I would venture to say during the RNC it will be well-secured. There may be some engineering reasons why it's not secured now."

Inside the tunnel, our crew spotted raccoon footprints and graffiti covered the walls. If you listen closely, you can hear the traffic on I-277 zooming overhead.

Charlotte officials responded to the 2012 report with concern and a hope that free access would end. At the time, the city promised safety measures would be completed at the right time and right locations.

NBC Charlotte's crew only found one addition that might stop someone. A faded "No Trespassing" sign was painted at the entrance to the tunnel. And it was so faint, you wouldn't notice it unless you were looking for it. Similar notices are posted at other entries, too.

Swecker, who also formerly worked as the head of security for a bank in uptown, said a sign isn't going to stop someone who wants to hurt others.

"I think we've been lulled into a place of complacency since 9/11," Swecker said. "I'm confident before the RNC it will be taken care of. It won't be a vulnerability for the RNC. I think the point being it's a vulnerability for an ongoing basis when there aren't special events going on downtown."

The City of Charlotte wouldn't talk about what measures it's taken in the years since the DNC, only saying that since safety is the city's top priority, all security details are confidential. That means we don't know if the city's added cameras, sensors or nothing other than the "No Trespassing" signs. The city previously warned improving security in the tunnels could make the system less effective in flood prevention.

The City of Charlotte sent the following statement to NBC Charlotte:

"To reiterate, safety is the City of Charlotte’s top priority and for that reason it is our practice to keep security details confidential. Additionally, only trained individuals should enter or attempt to enter the storm drainage system.

The storm drainage system is a large network of structures, ditches, pipes and streams that carry stormwater through our community. The system reduces the risk of street and structure flooding...

...Charlotte-Mecklenburg Storm Water Services may use signage on a case-by-case basis, but it does not maintain a list of when or how many locations."