How our city has grown... what has changed in Charlotte since we hosted the 2012 DNC?

When the Republican National Convention kicks off one year from now in Charlotte, it won't be the Queen City's first rodeo.

Seven years ago, Charlotte hosted the Democratic National Convention in 2012.

NBC Charlotte took a look back at what happened at that event when the largest city in North Carolina was thrust into the national spotlight.

The dream of having the 2012 Democratic National Convention (DNC) in the Queen City became a reality on February 1, 2011. That’s when Charlotte was officially designated as the host city for the DNC.

The Queen City beat St. Louis, Cleveland, and Minneapolis in its bid to land the convention.

Preparation for the big event to be held September 4-6, 2012, at Time Warner Cable Arena began almost immediately as the convention was expected to draw around 35,000 people to Charlotte.

Hosting the convention also meant new construction and jobs for the two years leading up to the DNC.

The city received a $50 million federal security grant to help with preparations for the DNC.

More than 1,000 law enforcement officers from outside Mecklenburg County were brought in to help Charlotte-Mecklenburg Police keep the city safe. Federal and local authorities rolled out a nearly 20-page plan detailing road closures, checkpoints and other security measures.

Several hundred National Guard members were activated. Private investigators were trained as bodyguards. The Secret Service came to town along with the Department of Homeland Security.

A Multi-Agency Communication Center (MACC) was set up with 90 work stations allowing agents to monitor video from the air and the ground. Nearly 500 cameras were focused on areas in and around uptown.

“What we’re doing is enhancing all of the communicating capabilities within the city and county,” said Homeland Security Agent Russell Nelson.

Visitors were told to secure their belongings and not to leave purses, bags, briefcases, and book bags unattended.

“We are going to err on the side of caution,” CMPD Officer Mandy Giannini said.

The DNC was declared an “extraordinary event” which granted police expanded powers.

On September 4, Antonio Villaraigosa, who was the mayor of Los Angeles as well as convention chair, gaveled the 2012 Democratic National Convention to order at 5 p.m. The keynote speech was delivered by Julian Castro, who was the mayor of San Antonio. Foxx also took the stage, and the night was wrapped up with a speech given by First Lady Michelle Obama.

The last day of the convention saw many speakers from the Carolinas, including:

All three days of the convention were held at Time Warner Cable Arena. The last night was supposed to be held at Bank of America Stadium, but a risk of severe weather prompted organizers to move the finale to the arena.

“It was really a public safety issue,” said DNCC CEO Steve Kerrigan. “It’s somewhat upsetting for so many folks.”

More than 65,000 people had signed up for credentials to hear the president speak at the stadium, according to Kerrigan. The stadium would hold up to 74,000 people; the arena capacity was only about 24,000.

It was announced President Obama would address community credential holders in a conference call on Thursday. When the seats at the arena were filled that night, arena personnel closed all the doors to the building.

The venue change also forced the NFL to move its season kickoff game to Wednesday instead of Thursday to avoid conflict.

Protesters, including people from the “Occupy” movement, showed up at the 2012 DNC.

By the time all was said and done, 25 people were arrested, and no one was hurt. Of those arrests, 16 were pre-negotiated between CMPD and protesters.

"Certain demonstrators wanted to get arrested. We negotiated when and where they'd be arrested. We would give them five to eight minutes of sitting in the street and then we'd effect arrest," said Rodney Monroe, who was CMPD's police chief at the time.

Some protestors told NBC Charlotte the demonstration was an "articulation of the boundaries of police state."

"This is a test march," 32-year-old Shangry Gorecki of Los Angeles said. "We want to see how they play."

Some prominent Republicans came to Charlotte on the first day of the convention and held a news conference with a group called "Obama Isn't Working".

U.S. Rep. Tim Scott (SC) pounced on a remark Obama made two years back where the president said he would give himself an incomplete grade because the economy hadn't fully rebounded.

Scott said he flunked out of 9th grade and knew an incomplete grade was really just away to hide a failing grade.

Gov. Nikki Haley (SC) said women cared more about just contraceptives and should vote for Republican nominee Mitt Romney because he had a better plan.

Charlotte has seen a lot of growth since hosting the DNC, starting with how many people now call the Queen City home.

The arena in uptown changed names in 2016 when Charter Communications bought Time Warner Cable. It's now called the Spectrum Center.

A record number of people flew out of Charlotte Douglas International Airport after the convention was over. At the time, the airport offered non-stop service to more than 134 destinations worldwide. That number is now up to 177.

The light rail was up and running in 2012, but an extension from 7th St. to UNC Charlotte was completed six years later in 2018. More than 100 new restaurants have also popped up in uptown.

There were 4,400 hotel rooms in uptown Charlotte in 2012. By August 2020, the number is expected to reach 6,316, according to the Charlotte Regional Visitors Authority (CVRA). 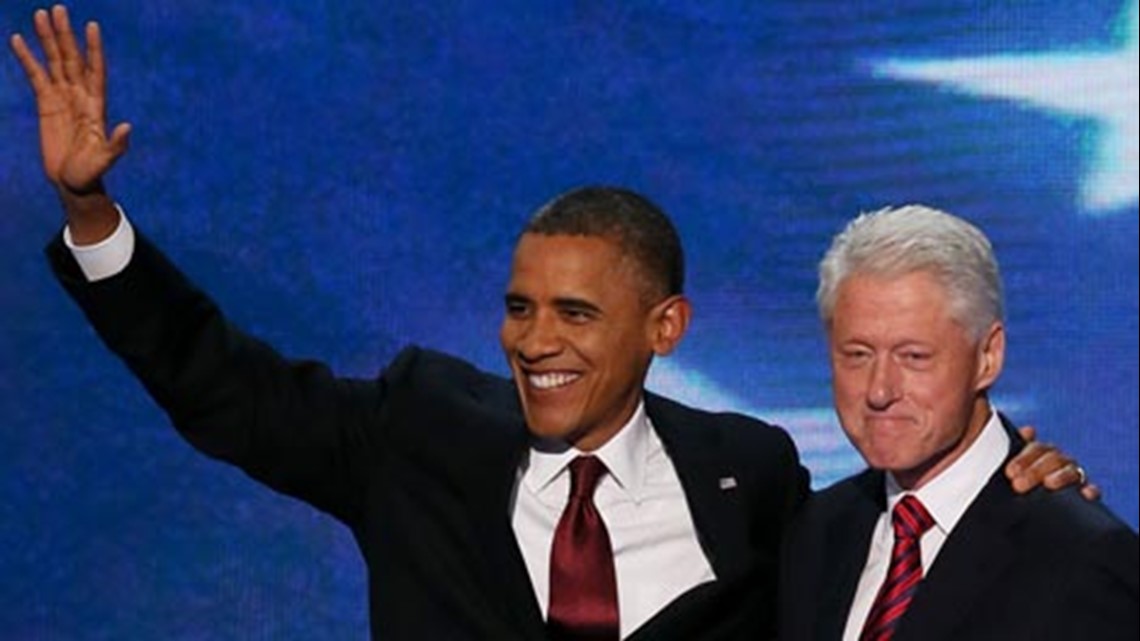